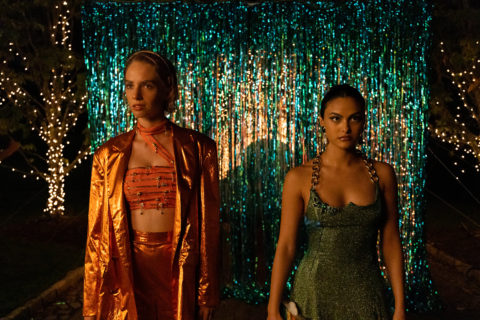 Whatever you think this movie is about — you’re probably wrong.

Where would the teen movie genre be without the makeover montage? I mean, when it comes to on-screen high school hierarchies, it’s the oldest trick in the book. We’re all familiar with the formula: a reluctant, unfashionable new girl undergoes a complete transformation in the image of the queen bee character. But in Netflix’s Do Revenge, this trope — and all its problematic associations — is explored in a whole new way.

Filled with plenty of pettiness, campy costumes and suspenseful plot twists, Do Revenge turns the classic teen rom-com on its head. The story is set at a pretentious private school and follows the unlikely friendship between It Girl character Drea (Camila Mendes) and awkward new girl Eleanor (Maya Hawke). Like any healthy relationship, their bond is built on the quest for vengeance. Spoilers ahead.

In the film, Drea is seeking revenge on her ex-boyfriend. Eleanor, on the other hand, wants to take down Carissa, a former classmate who outed her and spread rumours that she was a predatory lesbian. To make this plan work, Drea suggests it’s time to give unassertive Eleanor a daring new look.

But the thing is, Eleanor’s not the happenstance newcomer she appears to be. Sure, when we meet her, she fits the mould of the mousy, unpopular kid. Sporting an oversized wardrobe, darker colours and a hat that reads, “I hate it here,” she stands out against a sea of preppy pastels. She even fights the idea of getting a makeover (classic!), saying “it feels so problematic,” to which Drea responds, “It is, but it’s fun!”

This exchange sets the stage for the film’s twist on the transformation trope, orchestrated by costume designer Alana Morshead. Unlike the teen movie makeovers of yore, Eleanor doesn’t adopt a Type-A popular-girl image. Where Drea’s wardrobe is ’90s-inspired, colour-coordinated and form-fitting, Eleanor’s new style is simply an elevated version of who she already is. Her long brown hair is cut and bleached. She trades in her muted colour palette for warm hues and floral patterns. But through it all, she holds onto her individuality — referencing ’60s fashion and staying true to her androgynous side with pantsuits, Bermuda shorts and overalls.

It’s a refreshing break from the carbon-copy makeover arc we’re used to. In Clueless, fashion expert Cher (Alicia Silverstone) moulds Brittany Murphy’s Tai into a brunette version of herself, with an added mean streak. And in Mean Girls, Cady (Lindsay Lohan) goes from being an outsider to a mini-skirt-donning villain to fit in with the Plastics.

With a rising social status and sense of superiority, time and time again, the newly transformed character becomes a high school tyrant. But Eleanor didn’t need a costume change to channel her conniving side. Because in Do Revenge, the makeover subject is actually the mastermind.

In the third act, we learn that Eleanor was not seeking revenge on her classmate, Carissa. She was actually targeting — wait for it — Drea. Turns out, Drea was the one who spread those rumours about Eleanor years ago, and Eleanor purposely befriended her to take her down. Herein lies the deeper symbolism of the makeover in Do Revenge.

At the start of the film, pre-makeover Eleanor hints at her plans for Drea with a cryptic inner monologue. “She doesn’t know it yet, but we’re about to become besties,” she quips.

After Eleanor’s true intentions are revealed in act three, her evil edge intensifies. She pledges to ruin Drea’s reputation. She threatens to plant drugs on Drea’s mom. She even hits Drea with her car, landing her in the hospital. To state the obvious, her bold new look didn’t create her aggressive side, it simply suited it well. By getting a makeover, she became even more herself.

The conclusion of the film also subverts the traditional makeover trope, wherein there’s an expectation that the character’s style will evolve once more after learning an important lesson. In the final scene of Mean Girls, Cady reverts to a pared-down wardrobe of jeans and a T-shirt. And in Clueless, Tai makes amends with Cher after adopting a neutral style that feels truer to her.

But at the end of Do Revenge, Eleanor doesn’t tone down her new look — she maintains it. And even though she and Drea make up, they never seem to fully learn their lessons. As such, their respective extravagant aesthetics complement their moral ambiguity, so why bother to change them? Instead, they choose to revel in their most OTT selves — in their fashion choices and in their lives. As Eleanor so eloquently puts it: “I’m a teenage girl. We’re psychopaths.”

Photography by Kim Simms/Netflix
Get the best of FASHION in your inbox Thanks for signing up!
The latest fashion, beauty and celeb news delivered right to your email #FASHIONforall Now, check your inbox to complete your subscription
We won’t ever use your email address for anything else
Want even more FASHION? Follow us on social media.