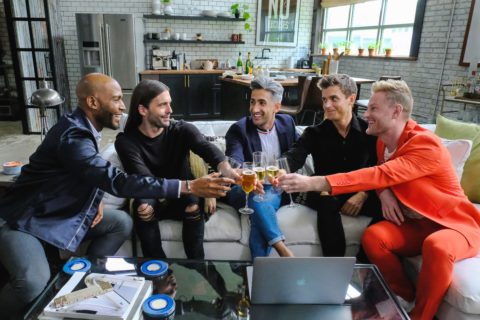 It's the series we've all been waiting for.

I grew-up loving makeover shows. As a young girl, I believed that veneers, a new wardrobe and an open concept kitchen were the first steps to building someone a better life. This is, of course, problematic: gifting someone with conventional attractiveness will not change their personality and individuality, nor will it make them happy. So now that everyone is super woke, shows like these are hard to come by. Could you imagine putting a woman in a glass box while strangers assess her appearance? In 2018? It couldn’t happen.

But maybe the makeover show didn’t have to die. Maybe, it just had to evolve. Netflix’s new series Queer Eye, a reboot of the early 2000s Queer Eye for the Straight Guy, has quickly become the most talked about TV show on the Internet. The original series saw a group of five gay men add a sprinkle of glitz and glamour to the lives and looks of hapless  heterosexuals. The reboot does all that — and a lot more.

The eight episodes are wildly entertaining binge-able content, but they tackle issues that go far deeper than the traditional before and after makeover show. Queer Eye explores queer identity in relation to self-confidence, religious acceptance, coming-out and police violence. “The original show was fighting for tolerance,” Tan France, the fashion expert, said in the first episode. “Our fight is for acceptance.”

The Fab 5 don’t just teach men how to cook, dress, decorate and trim their beards, they teach them how to love themselves from the inside out. It isn’t about overnight change, it’s about evolving; they take these stuck and stodgy middle-aged guys, and sincerely show them how to be accepting of themselves, and accepting of those different from them. The result: a whole lot of emotion. You will not make it through an episode without crying in hysterics — but at least you aren’t alone. Here are some of the Queer Eye fans that are sobbing with you.

Anyone else spend all day hysterically crying while watching the new @QueerEye in bed or is that just me…..?

New #QueerEye –
Tan: Here’s a new shirt.
Bobby: Let’s buy you a nice mattress.
Antoni: This is how you make a sandwich.
Jonathan: Let’s oil that beard!
Karamo: You are beautiful and deserving of love.
Me: pic.twitter.com/qtSvJ9DID8

Every. Damn. Episode. Wrecked. Me. And I’m dead inside.

Watching the new @QueerEye with my wife @SaraKiener gives me so much hope for our future. Love this new cast. It's so inspiring and just what the world needs right now. Thanks for the recommendation @WillBlomker ? Also @tanfrance – can you please take me shopping?