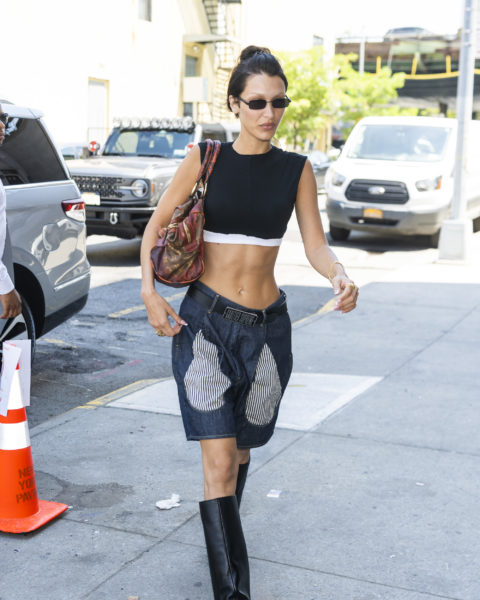 Don’t get me wrong: I’m all for micro-mini shorts. But the fact is, sometimes I simply don’t want to be perceived. And when it’s hot out, finding breezy clothes that still offer me a sense of anonymity is a challenge. Enter Bermuda shorts.

As far as polarizing pants go, Bermudas reign supreme. The high-waisted, pleated, knee-length shorts have gained an anti-chic reputation that can only be described as retired tourist attire. When you think “Bermuda shorts,” you may envision them paired with a tropical print T-shirt and fanny pack. Perhaps they’re being worn by your grandpa on a cruise. If that’s the case, I don’t blame you.

Offering comfort above all else, the oversized Bermuda shorts are not what one would call objectively “cute.” I was once a long shorts hater, writing them off as frumpy and boxy without truly giving them a chance. Instead, I frequently opted for itty bitty daisy dukes in the summer, despite feeling uncomfortable wearing them. And TBH, there was no good reason for my disdain towards Bermudas.

Luckily, the shorts have been having a redemption arc for a while. They’re all over TikTok. They’re worn by the likes of Emily Ratajkowski, Bella Hadid and Meghan Markle. And just recently at Copenhagen Fashion Week, designers Henrik Vibsko and Baum und Pferdgarten presented their own take on the knee-grazing pants. So it’s official: Bermuda shorts are cool again. But not everyone is thrilled about that.

As a refined take on traditional culottes and a distant cousin of oversized jorts, opinions on the garment remain mixed. And I get it. I mean, Bermudas are pretty confusing. With their billowy material, they can easily be mistaken for skirts. And their knee-length tailoring teeters into capri territory — a place that few are willing to enter. Some even argue the garment shouldn’t be considered “shorts” at all. But it’s this elusive identity that has allowed Bermudas to play a part in the evolution of genderless fashion.

Originating as a menswear design in the 20th century, their light fabric and breezy ventilation made them the ideal bottoms for hot summers. But into the early 21st century, shorts of any kind were controversial, and wearing clothing associated with a gender other than your own could lead to trouble with the law. As clothing deemed “socially acceptable” evolved through the decades, the shorts took off among women. By the ‘90s, they were a staple of stylish dressers like Laura Dern and Princess Diana. And in the early aughts, they continued to infiltrate runways.

June 1990 | Princess Diana, wearing shorts, as she is seen leaving a lunch date at San Lorenzo Restaurant in London. pic.twitter.com/xF9gt8uDjm

Since their rise in popularity, however, Bermuda shorts have gained a reputation for being practical but unfashionable — until now. If you couldn’t tell by the cargo pant renaissance, we’re clearly in the age of reviving the sartorially uncool.

And after all, what’s not to love about Bermudas? Their modest tailoring and effortlessly flared cut make them ideal for summertime comfort. Not to mention, they’re a styling no-brainer. Channel the big pants, small shirt trend by wearing them with a tube top, or opt for a grungy look by sporting a baggy tee or flowy button-up. Slip them on with flats or platform boots. Wear them to the office or the beach.

All things considered, Bermuda shorts are a timeless, versatile staple. And with a history rooted in gender-neutral dressing, they embody fashion’s new freedom. Right now, anything is “in,” as long as you feel good wearing it. As for me, I’m always on a mission to honour my hot-girl summer wardrobe ambitions. Sometimes that means wearing low-rise shorts. But more often than not, it means channelling my inner grandpa. And I’m okay with that.