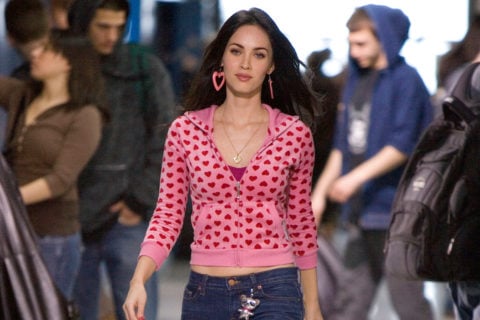 How Jennifer’s Body Captured the Rich Complexity of Queer Love

The 2009 cult film offers a raw look at a teen relationship that helped me to better frame my own queerness.

Coming out queer in adulthood can include a lot of rejigging of one’s memories. At least it did for me. “Did that friendship mean the same thing to both of us?” “Was that admiration or a crush?” “What was that childhood fascination with Brendan Fraser and Keanu Reeves really about?” I’d be lying if I said I fully internalized the queerness of Jennifer’s Body when I first saw it in early 2010 — on DVD, months after missing it in theatres. It would still be a few years before I embraced or even acknowledged my own bisexuality. But the film spoke to me on a few levels. Core to that was the relationship between its protagonist Needy Lesnicky (Amanda Seyfried) and her best friend Jennifer Check (Megan Fox).

Jennifer’s Body, from screenwriter Diablo Cody and director Karyn Kusama, tells the story of a teen girl who is possessed by a demon after a ritual to make some hipster indie rockers famous goes wrong. We see Jennifer’s transformation into a literal man-eater (or boy-eater to be absolutely precise) from the perspective of her BFF and sometimes-lover Needy, who wants to save not just the boys Jennifer is snacking on but also Jennifer herself.

As has now been very well-documented, the film was a major miss both critically and commercially upon release, later building a cult following over time. But Jennifer’s Body wasn’t just rejected. Its core themes were ignored, thanks at least in part to an abysmal marketing campaign and dual backlashes against Cody and Fox. Among those core themes was the film’s exploration of queer love. And it wasn’t a neat and tidy exploration of queer love. It didn’t give us purely evil queers, or happy-go-lucky flawless queers. It didn’t tell us what to feel or how to feel it. It didn’t even label Jennifer and Needy as a couple.

Instead, it gave us three-dimensional queer characters — flawed, conflicted, beautiful, passionate, hurting, repressed, liberated — and let them exist onscreen as they were, leaving it to us to tease apart what it all meant on our own.

This isn’t some act of queering by way of subtext, though. The Jennifer/Needy dynamic is explicitly both platonic and romantic, with the line between those often blurring. Needy introduces Jennifer via voiceover, watching admiringly as her lifelong bestie performs on the flag team. “Sandbox love never dies,” she says, as the Black Kids’ lyrics “you are the girl that I’ve been dreaming of ever since I was a little girl” play on the soundtrack. If you need an extra nudge, a fellow student, noticing Needy’s fixation, leans in and says, “You’re totally lesbigay.”

That’s one of the opening scenes. Later, we see a possessed Jennifer kissing Needy, who, despite growing suspicions about her friend’s crimes, leans right into it. “We always share your bed when we have slumber parties,” Jennifer says, before reminding her of their history of “playing boyfriend/girlfriend.”

When I interviewed Karyn Kusama for my book on Jennifer’s Body, she told me it was important to her that the film’s queer elements be protected, that the relationship between Needy and Jennifer be explored in all its rich dimensions. Sadly, the kiss in particular was largely written off as fodder for the titillation of straight teen boys.

The film’s enduring appeal, and its continued elevation as an underappreciated classic, is nearly impossible to read outside the complex humanity of its heroines, and the deeply layered intensity of their bond. “When I think of myself as queer, I like to think about all of the possibilities my humanity might entail,” Kusama told me.

When we talk about capital-R Representation, the implication is that there’s a right way and a wrong way to include certain identities on screen. After decades of some groups being treated as either one-dimensional, non-existent or disposable, the wrong way is fairly easy to spot. We know it when we see it. But the right way is harder to pin down. It either works or it doesn’t. It feels either truthful or not. Jennifer’s Body feels truthful.

At a time when the CEO of Netflix is suggesting that entertainment has no bearing on the real world, I’m reminded that Jennifer’s Body very much helped me imagine all of the possibilities my humanity might entail.