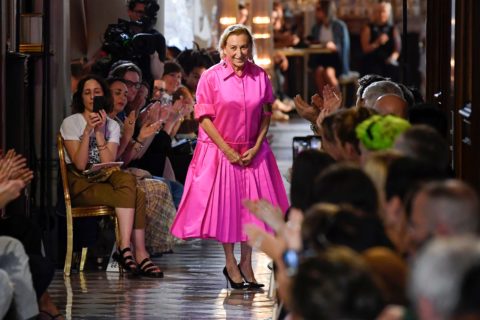 What to Make of Miuccia Prada’s Opinion on Cultural Sensitivity?

“I increasingly think anything one does today can cause offence," she said in a recent interview.

In an interview with Women’s Wear Daily ahead of her Mens F/W ’19 show, Miuccia Prada—patron saint of Intellectual Feminist Fashion—decided to sound off on the era of cultural sensitivity we live in, bemoaning that “anything one does today can cause offence.”

She went on to say, “There can sometimes be a lack of generosity but, on the other hand, how can we know all cultures? The Chinese protest, then the Sikh, then Mexicans, then Afro-Americans. But how can you know the details of each single culture so well when there can be 100 different cultures in every country?”

A little context: Mrs Prada is no doubt referring not just to the recent (and completely justified) backlash against Dolce & Gabbana for their racist marketing campaign and comments about Chinese culture and people, and Gucci, who came under fire for outfitting their Caucasian models in turbans and hijabs for their F/W ’18 show, but also the outrage against her own brand when it released a collection of trinkets that contained a figurine bearing a striking and hurtful resemblance to blackface minstrels, who historically used their theatre act to ridicule African Americans and propagate racism and slavery in the United States.

After social media erupted, Prada Group was forced to issue an official apology, in which they stated that, “resemblance of the products to blackface was by no means intentional,” and that “Going forward, we pledge to improve our diversity training and will immediately form an advisory council to guide our efforts on diversity, inclusion and culture.”

A+ for crisis management, but Mrs Prada’s most recent interview might be a little harder to walk back. Let’s take a closer look at what she said, starting with this bit: “How can you know the details of each single culture?”

No one’s expecting you—or any designer—to “know” every culture, unless you’re borrowing elements from that culture for your work, in which case, you really ought to read up. This should go without saying, but the moment designers decide to incorporate into their work cultural traditions that aren’t their own, they have a responsibility to do their due diligence and treat that culture with respect. If they don’t, well that’s just inexcusable and deserves to be called out.

Being called out on social media, though, is one of the things Prada seems to take issue with. Per WWD, “This has led Prada to ask herself, when she is readying a collection and a show, “Am I offending someone?” What she sees as a provocation, “could it be read as an offense?””

Well that seems like a handy little rule-of-thumb for life, does it not? “Am I offending someone?” sounds like a pretty good question to ask oneself when foraying into unfamiliar cultural territory, whether you’re a designer or not. And for those with massive public platforms and global reach, it’s even more imperative that these questions be asked. If you’re anxious that you may not have the sort of cultural exposure that could help you navigate such situations, try to surround yourself with a diverse group of people that might be able to point out some of those missteps before they occur. It’s the only way debacles like H&M’s “Coolest Monkey in the Jungle” sweatshirt and Prada’s blackface keychains can be avoided. While some may look at these as teachable moments, it’s clear (and surprising) that Prada seems to view them as evidence of an increasingly sensitive world that must be derided rather than understood.

But it’s not just Prada’s fear of retribution that’s striking about this interview; what’s especially strange is how she, a woman synonymous with a thoughtful, intellectual point of view, seems to equate political incorrectness with “progressive thinking.”

“I talked about it with the Fondazione [Prada], with the intellectuals, it really is a problem — one would have to set up ‘secret societies’ — otherwise there is no progressive thinking,” she says. “If you are not free to say things that may also not be correct and you have to be careful every time you open your mouth, how can you talk with freedom of thought?”

It is not, nor has it ever been, considered “progressive” to be ignorant, racist or insensitive, and it certainly shouldn’t be considered “a problem” that we live in a world where insensitive statements are criticized. Freedom of speech means a right to say what one wishes, but it also means people have a right to respond how they choose. While it is unfortunate that ‘cancel culture’ has overtaken our public discourse to the point that nuance and context is sometimes lost in favour of a knee-jerk reaction, the fact of the matter is that global connectivity allows the world to instantly weigh in on issues that, confined to ‘fashion circles’ built around the same narrow points of view, went unchallenged and unquestioned for so long. That Prada considers this an assault on freedom of thought is telling; more than anything, it uncovers a bristling at being held accountable for one’s words and actions and an impatience with other people’s opinions.

There are plenty of people you might expect to roll their eyes at an easily offended populace but Miuccia Prada isn’t—wasn’t—one of them.