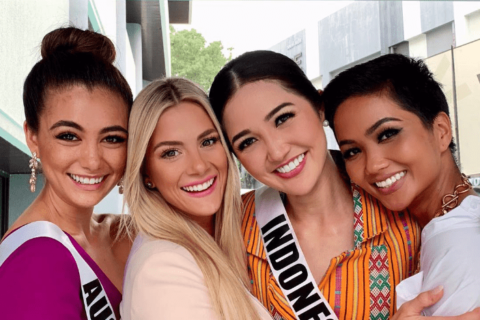 What is the web-o-sphere angry about this week? A patronizing pageant queen, a burger-shaming Victoria’s Secret model and a Prada trinket that bears resemblance to blackface imagery. Here’s everything you need to know.

THE STORY: The Miss Universe pageant—it’s the one that Steve Harvey tried to host—is being filmed in Bangkok this week. Miss USA winner Sarah Rose Summers has landed in Thailand to represent the United States of America in the best way she knows how. In a live Instagram video posted on Wednesday, Miss USA is filmed saying that to Miss Colombia and Miss Australia that Miss Vietnam H’Hen Nie is “so cute and she pretends to know so much English and then you ask her a question after having a whole conversation with her and she goes…” Miss USA then, imitating Miss Vietnam, smiles and nods her head. “She’s adorable.”

At another point in the video, Miss USA comments on Miss Cambodia’s language skills: “Miss Cambodia is here and doesn’t speak any English and not a single other person speaks her language,” she muses. “Can you imagine? Francesca said that would be so isolating and I said, ‘yes and just confusing all the time,'”she continues before concluding, “Poor Cambodia.”

Could miss USA speak any foreign language? It would be an asset to her. One should not tell another what language to speak. America does not have a national language, so have a seat!

Miss USA talking shit about Miss Cambodia and Miss Vietnam about not speaking english AS IF sis can have a conversation in any other fucking language. English isn’t even the fucking offical language of the United States. Check yourself #MissUniverse2018

@MissUniverse please disqualify @sarahr_summers for her racial mockery against contestants who do not speak English! This should not represent this pageant! #missusa #SarahRoseSummers #missuniverse #racist

RIGHTEOUSNESS OF THE RAGE: Miss USA has since apologized for the comments she made about the English-speaking ability of her fellow contestants, sharing to Instagram that she “intended to admire the courage of a few of my sisters.” On the flip side, Miss Vietnam and Miss Cambodia both posted images with Miss USA to their own feeds, each calling her their “sister” in some way. That’s all very sweet, and I’m glad these beautiful women have formed some kind of sorority-esque eternal bond, but they’re kind of missing the point, aren’t they?

Miss USA wasn’t being overtly racist. Her actions, instead, demonstrate the ignorant and xenophobic POV that has come to widely represent America to the rest of the world. Perhaps she’s trying to show empathy, as she claims in her apology, but from her place of perceived privilege her tone is read as condescending and intolerant. A superiority complex given power on an international stage? Hmm, this whole Miss Universe thing is almost a metaphor for American history.

THE STORY: Prada has recently launched a new line called Pradamalia, a set of several figurines in the shape of “mysterious creatures” developed by Prada Labs, the brand’s design department. The creatures were to be sold as keychains and handbag charms, and were enlarged for a NYC window display. New Yorkers were quick to notice that one of the trinkets, a cartoonish wooden monkey with exaggerated red lips, bears an uncomfortable resemblance to the blackface imagery that has historically propagated racism.

#Pradamalia is incredibly tone deaf and insensitive. You want to create mysterious animals? How about not drawing from racist history to do it? pic.twitter.com/Rfkmc36NNy

RIGHTEOUSNESS OF THE RAGE: The brand was quick to respond to the backlash, posting to their Twitter, “Prada Group abhors racist imagery. The Pradamalia are fantasy charms composed of elements of the Prada oeuvre. They are imaginary creatures not intended to have any reference to the real world and certainly not blackface. Prada Group never had the intention of offending anyone and we abhor all forms of racism and racist imagery. In this interest we will withdraw the characters in question from display and circulation.”

It’s hard to believe that nobody at Prada made a mental link between this figure and its racist connotation. How disconnected from history can you be? Sometimes context matters, and these polite and apologetic arguments of intent are not enough. As we’ve seen over and over again—from the H&M hoodie to pretty much everything D&G has ever done—there need to be systems in place that prevent these hurtful and harmful missteps from global brands. And, as we’ve heard over and over again when these controversies occur, there need to be people of colour in the decision-making rooms so that these missteps don’t make it beyond the boardroom.

THE STORY: One month after walking in the 2018 Victoria’s Secret Fashion Show, Swedish-Australian model Kelly Gale shared a series of odd videos to her Instagram Stories. She showed off her rock hard abs as she did leg lifts and jumped rope outside of a Monterey, California In-N-Out Burger. “We’re at In-N-Out…so I guess I’m having my pear,” Gale says to a friend in one of the videos, before biting into the fresh fruit. “No excuses,” she says in another video. “Not gonna pretend I was eating here.”

Who the hell does @KellyGale_ think she is? How dare you #fatshame others? #kellygale @innoutburger is the best and you can eat whatever you want Ms. Gale but please don’t be so pathetic and unkind to others. #Entitlement is not cute #InNOut

If I'm running @VictoriasSecret, I'm severing all ties with @KellyGale_ for her #INnOUT stunt. No reason to shame people you don't know, EVER.

No, never again will I purchase from Victoria secret, that arrogant jack Kelly Gale so deluded and arrogant to jump rope infront of In-N-Out Burger, screw off pic.twitter.com/8LG9VouFvl

RIGHTEOUSNESS OF THE RAGE: She’s not exactly fat shaming, is she. She’s junk-food shaming people, which is super annoying coming from a lingerie model, but it isn’t exactly a crime that warrants outcry. A simple “stop filming in here and let me enjoy my Animal Fries” would have sufficed. Besides, we already have enough reasons to boycott Victoria’s Secret.

Photography via Instagram/@sarahrosesummers
Get the best of FASHION in your inbox Thanks for signing up!
The latest fashion, beauty and celeb news delivered right to your email #FASHIONforall Now, check your inbox to complete your subscription
We won’t ever use your email address for anything else
Want even more FASHION? Follow us on social media.