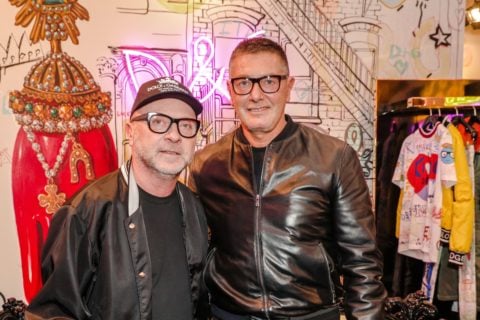 Dolce & Gabbana have a hefty history of finding themselves embroiled in controversy. Co-founder Stefano Gabbana in particular has racked up a reputation for having no filter, making rude comments on social media about celebrities and claiming designers don’t have to care about politics. Most recently, the brand alienated Chinese consumers after racist comments from Gabbana made their way from the DMs to Diet Prada and many retailers have blacklisted the brand as a result. Because the internet never forgets, here’s a comprehensive timeline of every single time Dolce & Gabbana have engaged in questionable behaviour.

In 2007, the brand released an ad depicting a woman being pinned-down by oily, half-naked men. Critics suggested the ads hinted at nonconsensual sex, potentially glamorizing the act of gang rape. After the backlash, the images were banned from Italian and Spanish publications.

November 2010: The designers are indicted for tax fraud

In 2010, the Italian designers were indicted for tax evasion after it was found they were using a holdings company in Luxembourg to avoid paying €200m worth of Italian taxes. In April of 2014, the duo were found guilty and sentenced to 20 months in prison. Afterwards, the pair stated their intentions to appeal the sentence and were later found not guilty in October 2014, by Italy’s highest court. Two lower court charges were dropped and the designers were officially cleared in this case.

At their Spring 2013 show in Milan, white models wore dangling earrings and dresses depicting images of stylized Black faces. The particular style of the faces, called ‘Blackamoor’, leans heavily on racist stereotypes and is usually associated with depictions of slavery. Yikes.

In an interview with Panorama, Gabbana made degrading comments about same-sex parenthood. The designer explained: “I’m not convinced with what I call chemical children, a rented uterus, semen selected from a catalogue.” He added, “life has a natural trajectory, there are things that should not be altered.” This sparked a heated social media #BoycottDolceGabbana reaction from Elton John, who has two children with his husband, David Furnish.

Just round up all my Dolce & Gabbana pieces, I want to burn them. I'm just beyond words and emotions. Boycott senseless bigotry! #boycottD&G

The brand came out with the unfortunately-named “Slave Sandal” for the spring 2016 collection, which was decorated in pom-poms and fastened around the ankle, like a gladiator sandal. Although most retailers omitted the name, the D&G online store used the term until backlash prompted the alternative name of “Decorative flat sandal in napa leather with pompoms.”

April 2017: The brand designs a sneaker that promotes body dysmorphia

D&G released a sneaker intended to appeal to the millennial generation that featured imitation Sharpie doodles, like the ones teens covered their sneakers with in high school. However, upon closer inspection, the phrase “I’m Thin & Gorgeous” written in blue ink, appears on the shoe. The words stirred up serious controversy. In an interview with Yahoo Style, Claire Mysko, CEO of the National Eating Disorders Association, said “Though there may be an element of cheeky humor at play in the design of these sneakers, equating thinness and beauty with success and status is a message that hurts everyone.” In response to the backlash, Stefano Gabbana fired back on Instagram, “Darling you prefer to be fat and full of cholesterol ??? I think u have a problem.”

After publicly congratulating her little brother Braison for walking the D&G Spring Summer 2018 show, Miley Cyrus openly disclosed her disagreement with the designer’s decision to dress Melania Trump. In response, Stefano Gabbana commented: “We are Italian and we don’t care about politics and mostly neither about the American one! We make dresses and if you think about doing politics with a post it’s simply ignorant. We don’t need your posts or comments so next time please ignore us!! #boycottdolcegabbana ????❤️.” He then swore never to work with Braison again: “For your stupid comment never more work with him.”

As the backlash towards the brand for dressing Melania Trump continued to mount, the hashtag #BoycottDolceGabbana was popularized on social media. In response, the brand appropriated the hashtag as a way to mock their critics, by creating branded t-shirts emblazoned with the phrase. By repurposing the tag for aesthetic purposes, the brand belittled efforts to advocate for real change.

Back in 2017, a comment posted on one of the designer’s photos of Melania Trump wearing the brand said: “Sad when a gay designer doesn’t care about other groups being repressed,” which sent Gabbana firing back with: “Don’t call me gay please!! I’m a man!!! Who I love is my private life!” Implying that one cannot be both gay and a man is one of the numerous problematic comments the designer has made on homosexuality.

#Repost @stefanogabbana US First Lady Melania Trump arrives for a visit at the Chierici Palace City Hall of Catania on the sidelines of a G7 summit of the Heads of State and of Government in Taormina ❤️❤️❤️❤️❤️ THANK YOU @flotus #melaniatrump ❤ #DGWoman #DGStyle ❤❤❤????

April 2018: Gabbana says he “doesn’t want a Japanese designer” to succeed him

In an interview with Reuters, when the designer was asked about succession plans for the brand, Gabbana angered many by saying “I don’t want a Japanese designer to design for Dolce & Gabbana,” without elaborating. Critics suggested this comment was an example of internalized racism against Japanese people.

After a collage of Selena Gomez’s red carpet looks was posted on Instagram, Stefano Gabbana proceeded to comment “E’ proprio brutta!!!,” which translates in English to “She’s so ugly!!!” The Selena fan base immediately attacked the designer via comments, calling him out for body (and, er, face) shaming the artist.

To promote “The Great Show,” Dolce & Gabbana’s runway event in Shanghai, the brand put out a video of a Chinese woman attempting to eat Italian food with chopsticks. The video ignited major controversy for it’s racist, ignorant, and distasteful sexual innuendos. Copious models and Chinese brand ambassadors pulled out of the event, which led to its cancellation. Following the outrage, Instagram direct messages between Gabbana and a user named Michael Tranova were leaked, in which the designer had compared China to the poop emoji. Of course, Gabbana blamed the stunt on a hacked Instagram account but later issued an apology video for making the comments.

As @dolcegabbana prepares to mount their next runway show in Shanghai this coming evening (7:30PM) and the rest of Instagram fawns over what’s sure to be an overly lavish “love letter” to China, we’ll be wondering if we’ll see chopsticks as hair ornaments, take-out boxes as purses, or even kimonos misappropriated as Chinese costume. Time will tell. For now, we’ll let y’all simmer on this DM between Stefano and Dieter @michaelatranova (chronology is reversed in slides). Word has it that they’re still in the process of model casting (over 200 Asian girls scheduled)…wouldn’t let them walk the show if we were their agents lol. Also, curious what the Chinese government will think of their country being called shit basically…especially considering how strict they are on who to allow to enter the country on work visas based on a thorough social media background checks. • #DGTheGreatShow #DGlovesChina #runway #fashionshow #cancelled #racism #dolceandgabbana #altamoda #rtw #dgmillennials #stefanogabbana #shanghai #chinese #china #wtf #dumb #lame #asianmodel #asian #dietprada