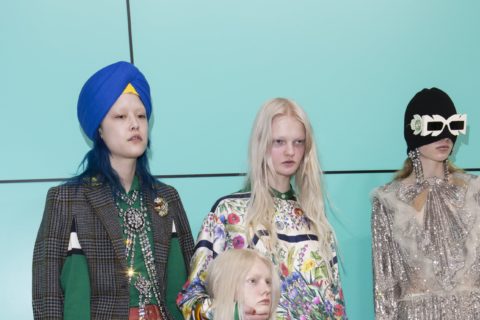 What Can We Learn From Gucci’s Cultural Appropriation of the Turban?

One of the stranger things about the Fall 2018 Gucci show was how the turbans got more press than the severed heads. Models carried their domes in the crook of their arms, like rugby balls. Even so, when it came to headlines, the headdresses trumped the heads. “Dear @gucci,” tweeted @SinghLions, Harjinder Singh Kukreja, “The Sikh turban is not a hot new accessory for white models but an article of faith for practicing Sikhs. Your models have used turbans as ‘hats’ whereas practicing Sikhs tie them neatly fold by fold. Using fake Sikhs/turbans is worse than selling fake Gucci products.”

Gucci’s calling out was swift and exacting. Gone are the impunitive days when Yves Saint Laurent turban-topped his ladies and Edith Head wrapped leopard-print scarves around Gloria Swanson’s head. Turbans used to convey oriental glamour; now they spell occidental trouble. Marc Jacobs accessorized with turbans a season earlier than Gucci and escaped critics’ beheading by a mere hair’s breadth. His were worn by a more ethnically variegated selection of models. (Jacobs had learned his lesson from dreadlock-gate. Alessandro Michele’s models, though, were as white and waxy-looking as zombies.)

Veronica Etro also blended cultural references into her Southwestern-inspired collection. She described the mélange as her vision of “ethnic futurism”—or an imagined post-identity world. Ben Barry, associate professor of equity, diversity and inclusion at Toronto’s Ryerson School of Fashion, has a different take. When designers confuse appreciation with appropriation, it “shows ignorance to the way in which power works in the world,” he says. “It’s easy for Marc Jacobs to put turbans on the runway and say he’s celebrating Sikh culture, but many Sikh men who live in the world and live in Western countries and walk down the street in turbans experience material consequences for wearing them. They experience marginalization, exclusion and violence.”

Some say the mood board makes fashion culturally tone-deaf. A collage of images compiled willy-nilly, like a magpie’s nest of bright and beautiful inspirations, the mood board functions as the guiding principle of what the designer wants to express. What it lacks is context. “It’s detached from the lived experiences of people,” says Barry. “True knowledge about culture and design and experience comes from people. We can learn a lot if we move away from this design board as a source of knowledge to engage with the people and communities who inspire us and wear our clothes.”

Cultural accountability and auditing, the kind that Barry advocates, may be the right thing to do, societally speaking, but do they sit well with the freedom and playfulness of designing clothes and crafting fantasy? Can the careful accrediting and footnoting of inspirations yield art that soars and sings?

At Gucci, more than at any other house, there is a sense of a stupendous cache of theatre costumes stumbled upon in an old attic somewhere. Hence the tickle-trunk madness of turbans, pagoda hats, mitre Yankee caps and belly-dancing headpieces. Playing dress-up and dressing up are ways to escape, and fashion is the purest, most do-it-yourself escape from the drudgeries of life.

“I love clothing, and I was always connected to costumes from a young age and dressed in a bohemian, crazy way,” says designer-turned-artist Miguel Adrover. “I used to go to church dressed as a Mohican with a long skirt from my grandmother. I lived in Spain, under a dictatorship, under the Catholic religion.” Adrover paid a steep price for his escapism. A New York star during the late ’90s and early ’00s, he shone as brightly and as hotly as Alexander McQueen and John Galliano. He was spending a great deal of time in Egypt then and had the Middle East and North Africa on his brain. Adrover designed a collection filled with caftans, turbans and veils and had the bad luck of showing it just two days before 9/11. The next month, he lost his financial backing.

Cultural insensitivity did not do Adrover’s business in; historical sensi­tivity did, and so did market sensitivity. But what if the attacks hadn’t happened? Would Adrover, who is Spanish, have been reprimanded for his Ishtar-inspired looks?

This is where we return to the severed heads. After the Gucci show, Alessandro Michele told a reporter: “We exist to reproduce ourselves, but we have moved on. We are in a post-human era, for sure; it is under way.” Michele had been reading A Cyborg Manifesto: Science, Technology, and Socialist-Feminism in the Late Twentieth Century, an essay written in 1984 by an academic named Donna Haraway.

Haraway believed that the boundary-blurring cyborg, who is both human and machine and therefore not really one or the other but something entirely new, was a way to escape the dualities that imprison us. In the case of the Cyborg Manifesto, whose concern is feminism, Haraway focuses on the essentialist dualism of male/female and man/woman, but cyborg thinking is a way out of other dualisms, too, like the ones that dog debates about turbans, dreadlocks and cornrows. We operate within increasingly narrow confines chopped up by innumerable fences: imperialist/colonized, dominant/marginalized, white/black, white/brown, religious/secular, you/me….

Haraway believed that if you are hybrid, a mosaic, a pastiche, a form of fusion—that if you are a human machine or a monster in the Frankenstein sense, patched together out of various dead body parts, whose existence pushes out the farthest limits of human experience—then you are in utterly new territory, unpopulated by the old binaries of powerful and powerless.

In the show, whose setting was a clinic, Michele was a self-proclaimed Victor Frankenstein and the models were suitably dead-looking. He was proposing them as new identity-free people with no allegiance or association to tribe, religion, ethnicity or gender. By extension, what they were wearing was similarly empty of meaning. “The act of cutting, splicing and reconstructing material and fabrics to create a new personality and identity” read a note on one of Gucci’s Instagram photos.

French designer Marine Serre, who has come under fire for the crescent moon motif—which is very much like the Islamic moon—on her clothing, told The Cut: “I’m really trying to push this hybridity by mixing things together…. I really tried to actually break these boundaries and borders and taboos. My work is about hybridity, and of course I do not wish to be associated with cultural appropriation. Today, the world is merging because of the media, because of Instagram.”

Is it coincidental that the designers who are proffering cultures of everyone and cultures of no one are white? Probably not. That futuristic “vision thing” comes more easily to those who do not battle with the everyday ignominies of missing out on an apartment because of the way they wear their hair or being passed over for a job because of their last name.

Still, it wouldn’t be right to end the article here and conclude that turbans on white-skinned models and Islamic moons on form-fitting bodysuits are dangerous decoys in the cultural wars. The identity conflicts we trigger when we “carefreely” co-opt the hair, clothing and symbols of exclusion—the daastar, the hijab, cornrows, the yellow star, the afro—are about infinitely just causes. But they often fracture the fight for an even more urgent justice, which is of the evermore poor and powerless many—the 99.99 per cent—against the invisible, self-perpetuating system of the wealthy and powerful few. It is a slightly different fight—economic, not cultural—and one that is propelled by indignation, which is what we feel when designers turn important cultural symbols into empty fashion accessories.

Yet if the bigger fish to fry is not cultural but economic fairness, winning it requires a coming together. It requires us to, even if temporarily, set aside or merge our different, diversionary you/me conflicts and join our affronted identities in the common cause of economic justice.