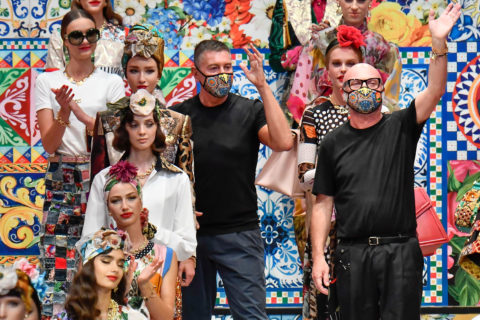 Has Dolce & Gabbana Been Forgiven?

After years of racist, homophobic and anti-Asian comments, the warm reception of the brand's Alta Moda collection in Venice demonstrates just how short fashion's memory really is.

For the last 72 hours, my social media feeds have been overflowing with praise for Dolce & Gabbana. As A-list celebrities, supermodels and top-tier stylists flocked to Venice, Italy to celebrate the Italian brand’s Alta Moda — their take on haute couture — presentation on August 29, I descended into the depths of Instagram, only to return hours later feeling really…uncomfortable.

Had everyone suddenly forgotten Dolce & Gabbana’s history of racism and homophobia? Did I miss the memo that D&G had atoned and been forgiven for, among other things, their deeply tone deaf 2018 campaign mocking Chinese culture? The fanfare around this unabashedly extravagant event seemed to imply as much.

At every swipe, a new, more lush image illuminated my phone: models and guests arriving via glamorous gondolas; a selfie between Kardashian supermom Kris Jenner and Princess Diana’s niece Kitty Spencer; a video of a golden Jennifer Hudson (both literally and figuratively, as she was dressed like an actual princess) belting out “Nessum Dorma” from the Italian opera Turandot; a Venetian gothic runway, that used the iconic landmark of Piazza San Marco as its backdrop; ornate and ostentatious gowns, dripping in kaleidoscopic patterns, lavish fabrics and intricate embroideries; crowns and floral headpieces as far as the eye could see. And I haven’t even mentioned J.Lo’s jaw-dropping ensemble.

But for every beautiful image and celebrity photo, I was reminded of fashion’s problematic short-term memory.

For those unfamiliar with or in need of a quick fashion history refresher, Dolce & Gabbana is well-known for at least two things. The first is their quintessentially Italian and over-the-top design aesthetic. Minimalism is not in creative directors Domenico Dolce and Stefano Gabbana’s vocabulary and their dedication to exuberance — despite the continued rise of streetwear and a more relaxed approach to dressing — is loved by many.

The second and far less positive defining characteristic is the brand’s history of racism, misogyny and homophobia.

In no particular order, Dolce & Gabbana once named a shoe the “slave sandal” and jewellery as “Blackamoor earrings;” Elton John called for a ban against the designers after they called children born from In-Vitro Fertilization (IVF) “synthetic children;” Stefano Gabbana called Selena Gomez ugly for no apparent reason other than misogyny; and the brand is now infamous for supporting former First Lady Melania Trump, having dressed her on multiple occasions during her time at the White House. The luxury house even poked fun at anti-Trump administration protestors and their continued support of the former President through a bizarre series of #boycott Dolce & Gabbana T-shirts.

However, it’s perhaps the Italian brand’s 2018 controversy that speaks the loudest — and reverberated the most.

Ahead of Dolce & Gabbana’s 2018 fashion show — ironically conceived and designed to woo its Chinese clientele — the luxury fashion house released a series of racially insensitive videos featuring a Chinese model attempting to eat Italian foods with chopsticks. The backlash on social media was instantaneous and forced the brand to delete the series from its Weibo account. Adding more fuel to the fire, Gabbana began personally responding to critics insulting both China and Chinese people in the process, as his DMs quickly leaked online and resulted in the cancellation of the brand’s 500-look show — and the cancellation of the brand as a whole.

In the wake of the aftermath, Diet Prada was at the forefront of the public condemnation of the brand and published the founder’s screenshots. It wasn’t until earlier this year that they revealed they have been battling a lawsuit from the Italian brand since early 2019, claiming defamation. The media outlet wasn’t alone in their criticism. Net-a-Porter and other e-tailers removed D&G products from their websites, Kim Kardashian West deleted a photo of her wearing one of their designs from her Instagram and customers around the globe starting returning their purchases.

Seeing as anti-Asian hate crimes have risen in the last 18 months due to racist rhetoric and misinformation around COVID-19, for major fashion outlets and celebrities alike to embrace Dolce & Gabbana so eagerly and effortlessly is disappointing, but perhaps not that surprising.

Fashion loves a comeback story (or is just too quick to forgive and forget for the sake of a free trip/gown/lavish party, depending on who you ask). Think John Galliano, who was infamously fired from Dior for anti-Semitic comments in 2011 and is now celebrated as the creative director of Maison Margiela.

The internet can be quick to cancel people and brands, but who stays cancelled and who is once again publicly embraced after a reprieve is much murkier. As celebrities, companies and media figures alike are examined under a microscope of political correctness, cancel culture has led to tangible results. Ellen DeGeneres is perhaps the best recent example, as public accounts of her fostering a toxic work environment prompted the comedian to cancel her daytime talk show after 19 years. Cancelled for now? Yes. But will Ellen be back in a year or two with a comeback project? Chances are, also yes.

It took less than a year for much of the fashion community to welcome Dolce & Gabbana back into the inner circle. D&G gowns started to once again appear on red carpets in 2019 when Emilia Clarke wore the designers to the TIME 100 Gala, and then at least seven A-list celebs wore them to the 2020 Oscars. An entire editorial centred around the brand appeared in British Vogue, featuring an interview with the designers.

Dolce & Gabbana got un-cancelled relatively quickly, and whether they did the real work to change after offending so many communities is up for debate.

The brand has undergone something of a rebranding. After the backlash of the 2018 Chinese campaign, both designers issued apologies and remained relatively quiet for several months as they rebuilt their image. Gabbana has since deleted his personal Instagram account. Kerry Washington’s 2020 Emmys look was auctioned off to benefit the When We All Vote, the nonprofit dedicated to voter registration founded by Former First Lady Michelle Obama. The luxury house pledged to make a “significant donation” to the NAACP on #BlackOutTuesday in June 2020. And they partnered with the LGBTQIA+ charity The Trevor Project for their 2021 Valentines Day campaign (above).

But is this enough? Is it as simple as forgiving and forgetting?

Vanessa Friedman, fashion director and chief fashion critic at the New York Times, told Fashionista in March 2021 about D&G mounting a comeback that when it comes to the luxury fashion house, or really any brand or person you choose to align with, it’s all about living with your choices.

“If you are going to publicly support — and fund — a brand that has acted in a hurtful way in the past because you believe they have learned from their mistakes, I think you should then be able to say, ‘I understand what they’d done in the past, and I feel this, and I thought this about it, and I made this decision; to me, that’s completely acceptable. But I wish that people would do that instead of either pretending that there wasn’t an issue or revealing that they haven’t bothered to think about their choices and are ignorant of the issue.”

When it comes to cancel culture and accountability, memories can be dreadfully short. Influencers, celebrities and shoppers have seemingly never been so woke and more vocal on social media, but the regular resurrection of cancelled celebrities and brands suggest the public are not following through when it comes to who they align themselves with, whether via their wallets or double taps. An angry online mob might be quick to form, but distractions — like a glamorous party and an extravagant outfit — arise just as fast. It’s up to the rest of us to continue the conversation.