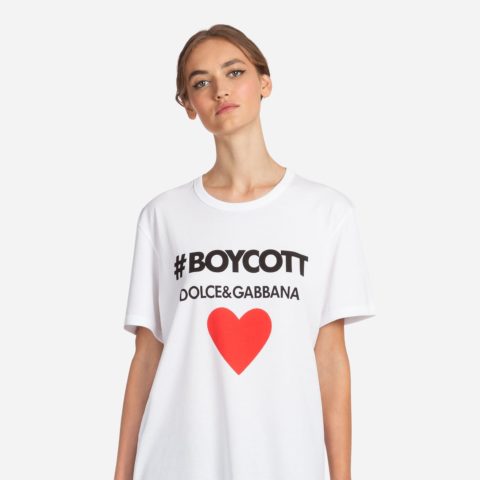 D&G Gets Political with #boycottdolcegabbana T-Shirt

It’s no surprise that Italian designer Stefano Gabbana is a fan of First Lady Melania Trump. He’s been quite vocal as one of the few designers that have agreed to dress Melania, and often posts images praising the Trump family on his Instagram account.

Many followers have disagreed with the brand’s public support of the Trump family, but in an epic clap-back to their critics, D&G released a limited edition t-shirt mocking the haters who’ve decided to #boycottdolcegabbana. To promote the t-shirt, a short film was released on Instagram starring Gabbana and his design partner Domenico Dolce.

The video showcases models waving Italian flags and banners spray-painted with the hashtag #boycott. Along with a string of crying-of-laughter faces, hearts, and Italian flag emojis, the caption for the video reads “All the lovers and all the #HATERS Reliving #boycottdolcegabbana #realpeople”.  The t-shirt and accompanying video were no doubt inspired by Internet trolls taking aim at the brand’s decision to dress the First Lady, but managed to turn political opinions into a buzz-worthy campaign that’s sure to attract attention.

It’s not a boycott without a selfie! Purchase your own #BoycottDolceGabbana t-shirt on the online store. Link in Bio. #DGMen Photo by Nello Esposito

If you’d like to grab your own #boycott t-shirt, it’s available right now for pre-order on the D&G website – just be sure to consider the political backstory before clicking the buy button.

Photography Via Instagram/DolceGabbana
Get the best of FASHION in your inbox Thanks for signing up!
The latest fashion, beauty and celeb news delivered right to your email #FASHIONforall Now, check your inbox to complete your subscription
We won’t ever use your email address for anything else
Want even more FASHION? Follow us on social media.