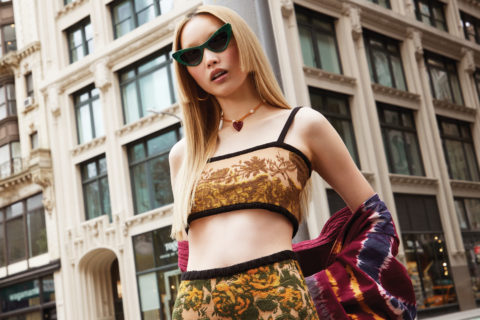 The Summer 2021 cover star says it's about time people talk about anti-Asian racism. “They’re shared global experiences and something that the Asian diaspora has grown up with. The situation has gotten worse in the past few years, where casual racism has become very openly accepted.”

The Fernanda Ly you see walking down the runway and posing in editorials and ad campaigns is the personification of cool. She exudes both a quiet magnetism and an air of mystery that some might interpret as her being standoffish. Fernanda Ly in real life is warm and self-effacing, with softer edges. For someone whose presence commands attention on camera, she’s pretty much attention-averse when she’s off the clock. Except for when it matters. That’s when Ly shows up and isn’t afraid to speak out.

Her YouTube channel provides perhaps the most intimate look at the real Ly, showing many facets of her prismatic personality. Originally intended as a behind-the-scenes look at what it’s like being a working model in the fashion industry, it has evolved, thanks to the pandemic, into a channel for Ly’s varied and sometimes niche interests — her luxury handbag and shoe collections, her adventures in building a mechanical keyboard and her love of beauty, anime and cosplay. But she also doesn’t shy away from digging deeper, especially when sharing the realities of being a model — the good and the bad. “The fashion industry is really secretive, even though it has such a luxurious image,” says Ly on a Zoom call from New York. “I want potential models to be aware of what they’re signing up for and to bring awareness to the unsavoury parts.”

Ly first came blazing into the fashion world at age 19 with her pastel-pink hair, turning heads on a runway full of notables as she walked Louis Vuitton’s Fall 2015 show. She was booked by creative director Nicolas Ghesquière, who signed her on for a five-season runway exclusive. Ly not only mesmerized attendees of Paris Fashion Week but also drew the fashion world’s collective attention — it practically vibrated with excitement.

This was a pretty impressive feat for a girl who’d been scouted just two years previously, before her final high-school exams, at a shopping centre in her hometown of Sydney, Australia. Before that, Ly had lived a relatively normal existence. She was born to Chinese parents who had moved to Australia from Vietnam in search of a better life and was raised in the suburbs of Sydney. The honours student was pursuing an architecture degree at the University of Technology Sydney until her career was catapulted by a single catwalk appearance. Once the work started pouring in, she pressed pause on her studies and turned her full attention to modelling.

Ly went on to book shows and ad campaigns for fashion heavyweights like Dior, Chanel, Tiffany & Co. and H&M. She also travelled the world — from Kenya’s Samburu National Reserve (to raise awareness for elephant conservation) to near Mount Fuji for a photo shoot. Meanwhile, her quirky fashion sensibility made her a street-style favourite and her striking pink hair topped every beauty mood board. (FYI, her much-lauded cotton-candy strands were a DIY dye job, thanks to some bleach and Manic Panic.)

Despite her success, Ly strove to be more than, in her words, “a hanger.” In 2017, she contributed to a series of personal essays on Models.com, bringing light to the sexual harassment within the modelling industry. She shared her experience of being inappropriately touched by a stylist and pointed out the various ways models are mistreated. Many of the models who also shared their experiences for the website’s survey chose to remain anonymous. “I also heavily considered that,” she admits, before adding: “It feels more personal when you know who and what someone experienced. I wanted people to know that they’re not alone.”

This decision might seem at odds with the model’s reticent personality, especially since Ly has always safeguarded her personal space. “There are some things that I believe are more important than my privacy, which is why I choose to speak out about them,” she explains. It’s why the thoughtful slivers that she does share carry more weight.

Ly inadvertently became the cool Asian model, which came with its own set of pressures and expectations, especially for someone her age. “People had an image of me, and I wanted to reach that image and be who they thought I was without really knowing who I was within myself,” she shares.

She also became aware of how the industry tends to view Asian models. “Asians are not a monolith,” says Ly. “Everyone thinks an Asian person is Chinese, Japanese or Korean. They always think of East Asia, but there’s also Southeast Asia. And when they want an Asian model, it’s always a model with black hair and pale skin. People don’t realize that we also come in many different colours and varieties. There are billions of Asians out there, so why would people think we all look the same?”

When it comes to identity, Ly has struggled with being put into boxes and never quite neatly fitting into any of them. She’s too Australian to be the Asian model, too Chinese to be the Australian model and not Chinese enough since her parents are from Vietnam. Once she moved abroad, she realized that she actually feels Australian the most. Ironically, it’s the part of her identity that she gets questioned about most often.

Earlier this year, anti-Asian hate crimes grew and gave rise to the Stop Asian Hate movement, which added another layer to a pandemic that was already rife with challenges. “It’s about time that people became aware of our experiences, which aren’t just limited to America,” she says. “They’re shared global experiences and something that the Asian diaspora has grown up with. The situation has gotten worse in the past few years, where casual racism has become very openly accepted.”

Ly is no stranger to it either. “I think you’d be hard-pressed to find an Asian person who hasn’t experienced racism of some sort in their life,” she says. “I have — through work. People try to talk about me, not knowing that English is my first language and that I can understand them. It seems small, but it builds a lot of anger and resentment within you over the years.”

As more people get vaccinated and there’s a glimmer of hope, Ly’s uneasiness remains. “There’s always this lingering sense of sadness and anger because we’re all worried about what the next big thing will be,” she says. Something as simple as stepping outside has become a big deal. “It’s supposed to be safe to go outside, but it’s still just very scary. What if I’m next?” When her friends go biking, in addition to their masks, they wear sunglasses and a hat and tie their hair back so they won’t be easily identified as Asian. “This is something they’re supposed to be doing for leisure,” laments Ly.

Despite the challenges of the pandemic, there have been some silver linings. Ly, who admits to being a homebody, has learned to readjust. She taught herself video editing for her YouTube channel. Last December, she brought home a kitten named Butter who has kept her smitten and entertained. When the fashion industry pivoted to Zoom shoots, Ly welcomed some of the creative control she got as a model. “We had to do our own makeup or wear our own stuff, which was really fun,” she says. And the pandemic has also strengthened some of her friendships.

Right now, her modelling work has started to pick up again. Another thing that likely won’t remain the same for much longer is Ly’s hair colour, which has been blond for the past two years. When she dyed it after almost seven years of sporting the same shade, she decided that this was the new her — older and wiser. But whatever colour palette she lands on next, she has already proven that she’s more than just “the girl with the pink hair.”

Photography by LILY & LILAC. Jacket, $2,900, top, $1,950, shorts, $1,750, and necklace, $1,150, Dior. Earrings, $130, Bonheur Jewelry. Sunglasses, $480, Dolce & Gabbana.
Get the best of FASHION in your inbox Thanks for signing up!
The latest fashion, beauty and celeb news delivered right to your email #FASHIONforall Now, check your inbox to complete your subscription
We won’t ever use your email address for anything else
Want even more FASHION? Follow us on social media.