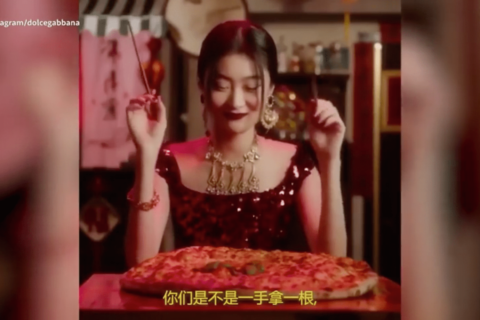 Dolce & Gabbana’s “The Great Show” was a mega-runway occasion slated to include 360+ looks and feature high profile models such as Lucky Blue Smith and Estelle Chen. But instead of creating good will with Chinese customers, the event was cancelled, and one of the brand’s founders was labeled a racist along the way.

It all started when Dolce & Gabbana released a video to promote the show, which featured a Chinese woman feebly attempting to eat Italian food with chopsticks. The videos were widely criticized as backwards and insensitive towards Chinese culture. Not to mention, they contained gross sexual innuendos. (“Is it still too big?” asks the voiceover as the subject of the video fumbles to pick up a particularly phallic cannoli using chopsticks.) The videos were taken down by the brand after 24 hours, but the damage was done. Chinese celebs began to withdraw their support from the show, including Dolce & Gabbana brand ambassador Karry Wang, and the modelling agency China Bentley pulled 24 models from the show.  Chinese celebrities spoke out against the show on Weibo, with actor Talu Wang stating, “Respect is more important than anything.”

As @dolcegabbana prepares to mount their next runway show in Shanghai this coming evening (7:30PM) and the rest of Instagram fawns over what’s sure to be an overly lavish “love letter” to China, we’ll be wondering if we’ll see chopsticks as hair ornaments, take-out boxes as purses, or even kimonos misappropriated as Chinese costume. Time will tell. For now, we’ll let y’all simmer on this DM between Stefano and Dieter @michaelatranova (chronology is reversed in slides). Word has it that they’re still in the process of model casting (over 200 Asian girls scheduled)…wouldn’t let them walk the show if we were their agents lol. Also, curious what the Chinese government will think of their country being called shit basically…especially considering how strict they are on who to allow to enter the country on work visas based on a thorough social media background checks. • #DGTheGreatShow #DGlovesChina #runway #fashionshow #cancelled #racism #dolceandgabbana #altamoda #rtw #dgmillennials #stefanogabbana #shanghai #chinese #china #wtf #dumb #lame #asianmodel #asian #dietprada

Here’s where things start to get murky. Someone named Michael Tranova took screenshots of an Instagram conversation with Stefano Gabbana, in which the designer reportedly compared China to the poop emoji, brought up eating dogs and used the incomprehensible slur “China Ignorant Dirty Smelling Mafia.”  After industry watchdogs Diet Prada got a hold of the screenshots and posted them on Instagram, Gabbana issued a comment that he had been hacked. A statement also appeared on Dolce & Gabbana’s official Instagram, reading “Our Instagram account has been hacked. So has the account of Stefano Gabbana. Our legal office is urgently investigating. We are very sorry for any distress caused by these unauthorized posts. We have nothing but respect for China and the people of China.” They later posted a note expressing gratitude to their friends and guests.

It’s not the first time the brand have been accused of racism. Less than two years ago, the #DGLovesChina campaign was similarly criticized for its stereotypical depictions of Chinese people, and in 2012 the brand produced Blackamoor brooches that glorify the slave trade.

In the wake of the controversy, the brand has been dropped by major Chinese e-retailers such as TMall, JD.com, Secoo as well as off the Chinese language platforms of the Yoox Net-a-Porter Group. (The designer will remain carried in the North American site.) The brand will also no longer be carried by Lane Crawford, which operates 10 department stores in China. WWD reports that “police and security guards have been posted at physical Dolce & Gabbana stores in both Beijing and Shanghai as precautionary measures.”

Finally, the D&G designers have issued a sombre apology video regarding the offensive statements. A dour-looking Domenico Dolce and Stefano Gabbana apologize in Italian, which has been translated with Chinese subtitles. “We will certainly not forget this experience and surely this kind of thing will never happen again, actually we will try to do better and we will respect the Chinese culture in every way. From the bottom of our hearts, we ask for your forgiveness,” says Gabbana. “Dui bu qi.”