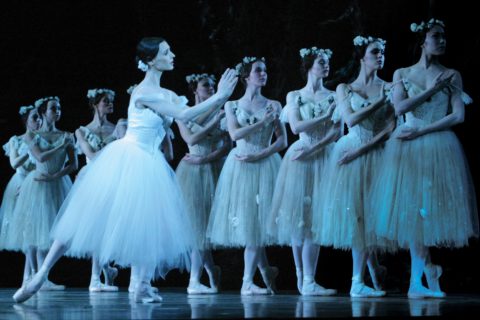 Greta Hodgkinson always seems to be in motion. Not just onstage with The National Ballet of Canada, where she has danced for 30 years, but even sitting across a table in a rehearsal studio in Toronto, at the company’s headquarters overlooking Lake Ontario.

She places a foot on the opposite knee as she speaks, demonstrating a hip that is far more limber than most. Her hands ruffle like a flag in the wind, as if they have no bones. And the reactivity of her facial muscles is a show in itself—just one of the many gifts she brings to the stage, whether she is at home or guesting with the Mariinsky Ballet in Saint Petersburg or The Royal Ballet in London.

“It’s only been done by a handful of ballerinas. And for ballets to stay alive, people have to dance them.”

Hodgkinson will give her farewell performance with the company in March 2020 in Marguerite and Armand, which was acquired in her honour by The National Ballet of Canada’s artistic director, Karen Kain. “It’s one that I wanted to dance for a long time,” says Hodgkinson of the ballet created in 1963 for Rudolf Nureyev and Margot Fonteyn by British choreographer Sir Frederick Ashton. “It’s only been done by a handful of ballerinas. And for ballets to stay alive, people have to dance them.”

For a dancer as renowned as Hodgkinson, who has had numerous roles and full ballets created for her, choosing how to retire is tricky. Some principals return to an old favourite, but Hodgkinson didn’t want her final perform­ance to be clouded by memories of how she had danced the role when she was younger. Others go out with a bang, like Wendy Whelan, for whom a brand-new work was created when she retired from the New York City Ballet at age 47. “I thought, ‘Wow, that’s so brave!’” says Hodgkinson. “And then I was like, ‘That’s such a great idea—to do something new.’”

This choice is both new and smart. Marguerite and Armand was created for Fonteyn when she was 43. Nureyev was much younger, so it’s the male role that “has the bravura,” explains Hodgkinson.

“Understanding how to build up to a role is super-important. So like a marathon runner, you know that on a certain day you need to be your best.”

She admits that age was a consideration when she and Kain started talking about her future a few years ago. “I didn’t know how I was going to feel in another two or three years, and I didn’t want to set myself up for something and then get there and feel that I didn’t know if I could do it as well as I wanted to,” says Hodgkinson, who left her home in Rhode Island at age 11 to attend Canada’s National Ballet School and then joined the company at 16.

As it turns out, Hodgkinson’s technique is still powerful and rich with nuance. And her characterizations have the emotional depth that can only come with maturity. That’s one of the benefits of dancing for so long, she says. “The technique becomes second nature so the other layers can sit on top of it.”

Hodgkinson chalks up her longevity to a combination of daily physiotherapy (her tote bag full of massage balls and stretching tools is her constant companion) and the guidance of Magdalena Popa, the company’s principal artistic coach. “She has worked with me through almost every role I’ve ever done,” says Hodgkinson. “Understanding how to build up to a role is super-important. So like a marathon runner, you know that on a certain day you need to be your best.”

“It’s just not going to get any better than this.”

The only major issue she ever had was when she was 21 and fractured her foot rehearsing Swan Lake. “We were doing a full run in the studio, and I did a jump and landed; I heard a pop, and I just fell to the ground,” she says. “It was my metatarsal, a stress fracture. That put me off for six weeks, and I was obviously devastated.”

But since that one hiccup, Hodgkinson hasn’t looked back, even sliding two children with fellow dancer and husband Etienne Lavigne into the picture.

Hodgkinson has projects planned for the next couple of years, including a new work with frequent collaborator Guillaume Côté that will be performed at Canadian Stage and Danse Danse next spring. So she seems more satisfied than sad about this career transition. “Thirty years is a good round number,” she says. “And I really wanted to do it at a time when I feel like I’m still dancing well and there’s still a lot that I can do. And Karen bringing Marguerite and Armand in for me is such a huge honour. I thought, ‘It’s just not going to get any better than this.’”

This article originally appeared in the Winter issue of FASHION Canada, on stands now.

Photography by Cylla von Tiedemann
Get the best of FASHION in your inbox Thanks for signing up!
The latest fashion, beauty and celeb news delivered right to your email #FASHIONforall Now, check your inbox to complete your subscription
We won’t ever use your email address for anything else
Want even more FASHION? Follow us on social media.