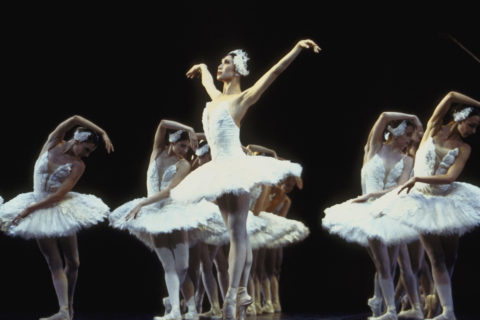 Ahead of Her Final Bow, Xiao Nan Yu Reflects on Her 22-Year Career With The National Ballet of Canada

"Me. The stage. Music. Pitch black. I will miss the forbidden feeling that time does not exist."

When Chinese-born dancer Xiao Nan Yu was 17, she moved to Canada to study at the National Ballet School. She arrived in Toronto on her own, speaking little English and using an airport sign with a pointe shoe on it as her only direction. Within the year, she was invited to join the National Ballet of Canada. From there, she moved to second soloist, then first soloist, and in 2001, she was promoted to principal dancer. For over fifteen years, she’s been amongst the most luminous and acclaimed stars on the Four Seasons Centre stage, dazzling as the lead dancer in performances of Romeo and Juliet, Sleeping Beauty, The Nutcracker and Swan Lake.

It’s been a long and rigorous physical journey, but it’s also been one filled with personal growth and emotional change. “I’ll have spent close to a quarter of my life in this one place,” says Yu. “I was a teenager when I joined, and it’s where I got married, became a mother and now, it’s where I’m retiring. This is really where I grew up and became who I am today.”

Later this month, Yu is bidding farewell to the warm spotlight of centre stage. The final bow is something that all artists must take at a point in their professional careers—and it’s one that ballerinas, in particular, take when they are at the peak of their artistic wisdom and ability. Ahead of her performance as the lead role of Hanna Glawari in The Merry Widow, Yu looks back on two decades of professional ballet.

Does ballet mean something different to you now than it did 22 years ago? How has your relationship with the art form changed?

Everything changed when I became a mother. I used to love the ballet for its beauty, simplicity and purity. But that was when I only had to worry about myself. After I became a mother, ballet became even more precious to me. I no longer had the luxury of time; I could no longer spend endless hours thinking about a role or perfecting a move. Because when I left the studio, I was a mom.

Having given so much of yourself to this art and this company, I can imagine the decision to retire was difficult. Why was now the right time?

As an artist, there’s never a right time to retire. The sad part of this profession is that as you become more mature and experienced—when you really can deliver more—that’s your body starts giving up on you. I’m pretty lucky that my body still listens to what I want it to do, but what I really wanted was to finish at the high point of my career. I don’t want to look back and think: last time I did this, my leg was higher. I didn’t want that to be my memory of the stage.

So really, this is for myself. I’m letting myself close this book so I can move on to the next chapter of my life.

What do you expect that next chapter to look like?

I’ll absolutely be involved in this art form. My knowledge, experience and training is something that I can pass on to younger generations. When I joined the company at 18, I didn’t know anything. I needed so much guidance then, and I feel that I can be that guide for others now.

What will you miss most about being on stage?

Me. The stage. Music. Pitch black. I will miss the forbidden feeling that time does not exist; when I could really lose myself in the moment. I will miss that for sure.

Why did The Merry Widow feel like the right final role for you?

I didn’t want the last performance that I do with that company to be sad or dramatic. I wanted it to be a happy ending. I first performed the role of Hanna Glawari in The Merry Widow when I was 22. I love the music, I love the heartwarming story; it’s about celebrating and finding your own place. This character Hanna is mature, she’s independent, she knows what she wants—and that’s where I feel I sit right now. I can make my own decisions, and I’m very confident with the decisions I’m making.

Overall, it’s just a ballet that brings joy. Every time I rehearse, I look into the audience and see huge smiles. I feel like that sense of joy is something we need now more than ever before.

While you look into a smiling crowd on June 23, how do you think you’ll be feeling as you take your final bow?

I’m not going to lie, it’s going to be sad. But this is performance is about celebrating my career; I want to feel fulfilled and happy and excited to be moving on to the next part of my life.

Xiao Nan Yu’s final performances will be in The National Ballet of Canada’s The Merry Widow, presented June 19-23, 2019 at the Four Seasons Centre for the Performing Arts in Toronto.

Xiao Nan Yu in Swan Lake, 2001. Photography by Cylla von Tiedemann.
Get the best of FASHION in your inbox Thanks for signing up!
The latest fashion, beauty and celeb news delivered right to your email #FASHIONforall Now, check your inbox to complete your subscription
We won’t ever use your email address for anything else
Want even more FASHION? Follow us on social media.