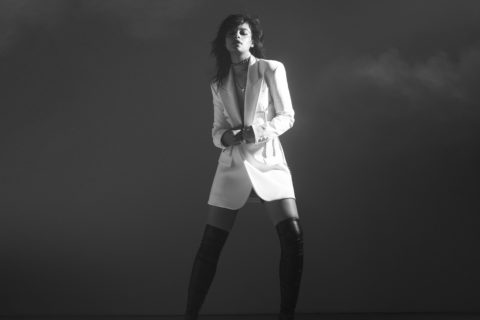 Fefe Dobson Is Ready for Her Next Act

In the early 2000s, she made waves with her edgy style and cathartic songs. After nearly a decade away, the music legend is back and bolder than ever.

Fefe Dobson has always been good at getting her point across. And when she emerged onto the early aughts pop rock music scene at just 18 years old, she kind of had to be.

Back then, the genre was “a boy’s game,” she explains. “When I was about to go on stage, I could feel the energy of, ‘What is she going to do? What is she going to bring? Like, yeah, right,’” recalls Dobson about the sense she got from her male counterparts early in her career. “I wouldn’t say consciously my goal was to — ” she pauses. “Actually, I’d be lying. Consciously, my goal was to make those boys eat my dust. And to show that girls can rock just as hard.” And that’s what she did.

Sporting smudged eyeliner, shaggy hair and a dark wardrobe adorned with studs and frays, Fefe Dobson became a pop-punk icon to an entire generation. Throughout the 2000s and early 2010s, the Canadian musician consistently gifted the world gritty anthems about the thrill of new love, adolescent angst and unapologetic rebellion. With her nonconformist style and head-bumping Fefe Dobson songs like “Stuttering” and “Take Me Away,” the artist emboldened young listeners to think — and dress — for themselves.

“I just tried to stick to my guns,” she says, looking back on her teenage stardom. That ethos is evident in her approach to fashion. It wasn’t until her early twenties that she wore a dress of her own volition. She categorizes a leather jacket as her “second skin.” To this day, she likes to bring a sense of self to every outfit. “Your clothing expresses who you are,” she says. And Fefe Dobson has always been a rebel. After nearly a decade since her last album release, the 37-year-old singer is back and ready to share her thoughts once again, in her own stylish, straightforward way.

In February, she dropped the single “Fckn In Love,” a roaring ode to uncontainable infatuation. And her newest release, “Recharge My Heart,” out October 21, is an upbeat tune about allowing yourself to fall in love again. When asked to name this phase of her life, her response is simple. “Pure love,” she says. “Just love.”

Ahead of a new album in 2023, Fefe Dobson spoke with FASHION about coming of age in the spotlight, her enduring edgy style and what the world can expect from her now.

The early 2000s were an era of rigid beauty standards and body ideals. How did those things impact you as a young woman in the spotlight?

I was 18 when I started [in the music industry]. I was going through a stage of trying to figure out who I was, if I was beautiful. And, you know, I wasn’t comfortable in my skin. At 18, you’re trying to figure it all out. Not to mention, there were photos and people around me that captured moments of discomfort. So I just tried to stick to my guns.

How did that mindset translate to your fashion sense?

I didn’t wear a dress until I was maybe 22 years old. At an MTV show, I wore a vintage Versace with safety pins going down it, and that was the first dress I’d ever worn. My mom put me in dresses when I was a little girl, but I never felt comfortable in them. I’ve always been a tomboy. There was pressure to put on more makeup, there was pressure to not have my hair so crazy, so unruly. And I just never felt comfortable with [those rules]. So when I started making music, I wanted to wear Dickies and Converse and tank tops. I just wanted to be comfortable. I was given my first leather jacket in 2003 or 2004, and after that, I knew that that was my second skin.

What’s a fashion practice you live by?

I don’t like to wear anything completely off a mannequin. If I see something on a rack, I will never wear it exactly [how it was styled], or the way someone else thinks it should look. I like to rebel against that. Vintage is amazing. I’m a big vintage shopper. And not everything is vintage — a lot of people get scammed, so I’m very bougie with it. I look at tags. I look at stitching.

“Fckn In Love” was your first single in eight years. In your time away from music, what have you learned about yourself?

How would you describe your upcoming album?

In the last few years, I’ve gotten married, I’ve had marriage issues and I’ve learned a lot about myself. Love, loss and heartbreak. The album is very honest. If there are any times that anyone questions, “Who is Fefe and what has she been up to?” I think that this album will really sum it up.