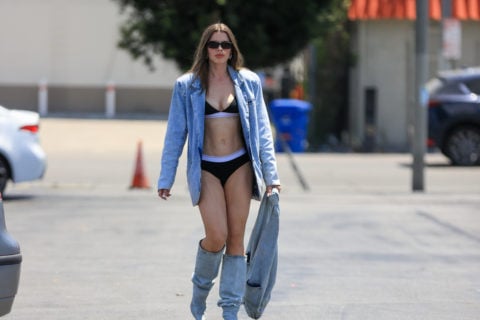 Is Early 2000s Paparazzi Culture Back?

The early 2000s was the golden age of the paparazzi, and the photos captured then (be it Britney Spears wearing a “Dump Him” T-shirt on a coffee run or Kim Kardashian taking a painful sip of vodka at the club) have lived on like sullied souvenirs of decades past.

Over the years, we’ve only become more fascinated with the lives of celebrities, but when the internet became available to all, social media usurped the paparazzo. So why does it feel like we’re going backwards? The shock factor of paparazzi pictures seems to be getting attention once again. But this time, it’s thanks to Julia Fox. And unlike her predecessors, she’s in on the joke.

Let me paint a picture. In the early aughts, celebrity culture was changing. The internet was becoming a mainstream commodity, tabloid magazines were in their heyday and fans had more access to the stars than ever before.

Because of how profitable celebrity pictures were, this period has been dubbed the “gold rush era” of the paparazzi industry, prompting many to join the field. Photographers would stalk and harass their subjects, and vile invasions of privacy — like upskirting women as they got into cars — were normalized.

The media gorged on mean headlines that usually centered on mental health breakdowns, body shaming or relationship scandals. Popular subjects — or, victims — included Spears, Paris Hilton, Lil’ Kim and Lindsay Lohan. At the time, there was both a public obsession and revulsion for young women in Hollywood, and it was peddled by the paparazzi.

Paris Hilton often used her on-camera moments to provide provocative soundbites or pictures, like talking badly about a famous peer or flaunting the purchase of her own leaked sex tape. Hilton was fluent in the language of paparazzi sensationalism, and Julia Fox is now carrying that torch.

With the rise of social media came the proverbial death of the tabloid magazine. Today, paparazzi shots are worth much less than they were in the noughties, and a paparazzo’s income can vary drastically depending on how interesting or shocking their subject is. Enter Julia Fox, a paparazzi gold mine.

In a few short months, Fox has mastered the art of virality. As a self-proclaimed “#1 hustler,” the star has provided a catalogue of strange quotes and out-there fashion statements, like her human hair clutch, dangerously spiky stilettos, and endless variations of ultra-low waisted pants. And most recently, the star was pictured grocery shopping in a black bra and underwear set.

Julia Fox is a walking meme in the best way. Her ethos can be summed up in this quote she gave to The Cut: “Celebrities are not that fucking important…We’re in a pandemic. Give people something to talk about. Do your fucking service, do your job.” It’s a job she takes seriously.

Her wild persona is just that: a persona. Case in point, when out with her one-year-old son, Julia Fox asked the paparazzi to refrain from filming her and offered to do a planned shoot with them instead. Unlike most paparazzi subjects of yore, she’s in control of her narrative.

Just your typical day at the grocery store 🤣 Julia Fox is the literal moment pic.twitter.com/kozQrjqOfh

Today’s paparazzi culture exists in a post-#MeToo world, and that distinction matters. The modern renaissance of early 2000s culture has set off a feeling of remorse for the way young women in Hollywood were demonized during that time. And it’s changing the way we view all types of media, including paparazzi content.

Someone that might once be deemed “off the rails” on a magazine cover is now “iconic” on TikTok. And TBH, there’s something empowering about seeing Miley Cyrus in a punk-ified LBD and fishnets tease that her favourite book is “The Holy Bible.”

The widespread return of Y2K fashion has kindled a fascination and nostalgia for the messy celebrity landscape that existed at that time. Early 2000s paparazzi culture has become its own aesthetic, with brands like Blumarine channelling this very energy with contemporary collections.

Early 2000s socialite being chased by the paparazzi looks at Blumarine Pre-S/S 2002 pic.twitter.com/iL27jKGSsb

For some reason, we want to know what famous people are doing. And when I see Julia Fox step out in a gravity-defying outfit, I can’t help but smile because I know she’s getting paid.

The paparazzi photo is back, but this time, it appears to be less exploitative. And as Julia Fox might say, that evolution is “a masterpiece.”