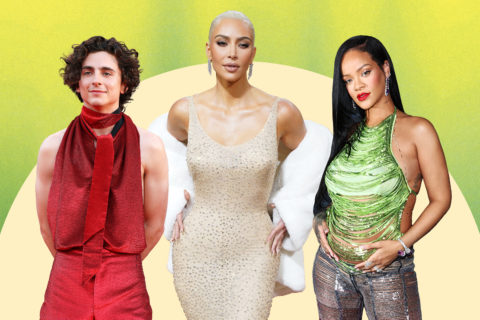 The Most Major Red Carpet Moments of 2022

From controversial to coveted, here are the most talked about celebrity looks this year.

Stars, they’re just like us. They make mistakes, they experiment with personal expression, and, sometimes, they like to throw shade. But unlike the majority of the population, they often do it all on a worldwide scale: the red carpet. And this year, by re-writing dress codes, rejecting binaries and delivering plenty of shock factor, celebs made sure there was no shortage of viral fashion moments to go around. As 2022 comes to a close, read on to revisit the most memorable style statements and viral outfits the past 12 months had to offer.

Rihanna delivers the unexpected while expecting

Rihanna in The Attico pic.twitter.com/wFV2Q2rYOD

2022 will go down as the year of a very important historical event: Rihanna’s pregnancy. Less than two weeks after announcing she was a mom-to-be (in vintage Chanel, naturally), the beauty mogul donned a custom slinky set by The Attico to attend a launch event for her Fenty Beauty and Fenty Skin lines. While accessorizing and accentuating her baby bump, this skin-baring viral outfit foreshadowed the rule-breaking maternity style Rihanna had in store for the coming months.

What’s a red carpet roundup without a mention of Zendaya? With the help of celeb-stylist Law Roach, the Euphoria star arguably stole the show at the 2022 Oscars with a heartwarming history reference. Wearing a floor-length silver skirt and a cropped white button-up, her custom Valentino look paid homage to Sharon Stone’s legendary white dress shirt in 1998. We love a fashion tribute!

Julia Fox brings the weirdness to the Oscars after-party

It’s been a big year for Julia Fox. Though she initially made headlines for dating Kanye West in February, the actor has gone on to prove herself as a subversive style icon all on her own. Arguably no look was more pivotal in establishing this reputation than her infamous Oscars night ensemble. Sporting an ominous neck-gripping dress, a handbag reportedly made of human hair and her signature smeared black eyeliner, Fox gave the world a taste of the sartorial strangeness she’s now known for.

With his ever-playful get-ups, Lil Nas X is ushering in a new wave of gender-bending menswear. As such, on the 2022 Grammys red carpet, the Montero singer delivered bejewelled drama in a Balmain suit dripping in diamonds and pearls. He completed the ornate ensemble — which featured butterflies embroidered on the chest and sleeves — with sky-high platforms, icy blue eyeshadow and lots of diamonds. An award-worthy look indeed!

If Kim Kardashian is going to do anything, she’s going to go viral at the Met Gala. This year, when the reality star appeared on the steps of the Metropolitan Museum of Art wearing Marilyn Monroe’s iconic 1962 dress, she accomplished that mission. The controversy following this look was swift, from the murky ethics of wearing a delicate piece of history to Kardashian’s questionable weight loss methods to fit the dress. But anything to break the internet, right?

Anne Hathaway reintroduces herself as a fashion icon

After years of being sartorially underestimated, Anne Hathaway was the talk of the 2022 Cannes Film Festival red carpet. In a style twist that felt very Andy Sachs, the actor served high-fashion glamour wearing a series of looks in the south of France. Most notable? A custom Armani Privé number comprising a bandeau and column skirt paired with a Bvlgari necklace.

There is truly no fashion territory Lizzo won’t enter. The songstress proved this yet again at the 2022 VMAs, when she served gothic excellence in a gargantuan Jean Paul Gaultier Couture gown. She finished the off-the-shoulder, pleated navy number with slicked-back hair, dark lipstick and an edgy lip ring. Exuding opulence from every angle, the oversized dress took on a life of its own — and doubled as a meaningful metaphor for taking up space.

The Venice Film Festival reliably serves as a space for over-the-top fashion storytelling. And this year, Jodie Turner-Smith was the main character. Amid a myriad of impeccably accessorized looks, she made the convincing case for underwear as outerwear in a Gucci pink lingerie slip. To top it off, she paired the sheer frock with white opera gloves, colossal thigh-high boots and teeny tiny sunglasses. The drama!

Timothée Chalamet bares his back

Timothée Chalamet has given us so much. Never one to shy away from challenging gender norms or taking a red carpet risk, the Bones and All star upped the ante at the 2022 Venice Film Festival when he donned a bright red backless halter-neck ensemble by designer Haider Ackermann. The strikingly bold number — in all its shining glory — has been living rent-free in our minds ever since.

Throughout its production, Don’t Worry Darling has been the source of endless celeb gossip, rampant conspiracy theories and downright dramatic fashion moments. Case in point: amid rumours of a feuding cast, Florence Pugh’s Valentino frock at the Venice Film Festival was quickly dubbed a “revenge dress.” We may never know the truth of what happened behind the scenes, but at least we have the outfits.

If there’s one thing we’ve come to learn about Taylor Russell over the last few months, it’s that she doesn’t do anything halfway. While promoting her buzzy romantic drama Bones and All at the London Film Festival, the actor leaned into the wealthy widow aesthetic in Schiaparelli haute couture. Wearing a romantically embroidered jacket, a waist-cinching corset, a wide-brimmed hat and a thick black choker, Russell solidified her status as a shape-shifting style star.

Billie Eilish and Jesse Rutherford prove coordination can be contentious

Visually enticing as they may be, not all viral red-carpet looks are well-received. Take Billie Eilish and Jesse Rutherford at the LACMA Art & Film Gala. To mark their first red carpet appearance together, the pair donned matching Gucci sleep sets and a massive logo-emblazoned duvet. Amid the ongoing social media debate concerning their 11-year age gap, the unified get-up added more fuel to the internet fire.