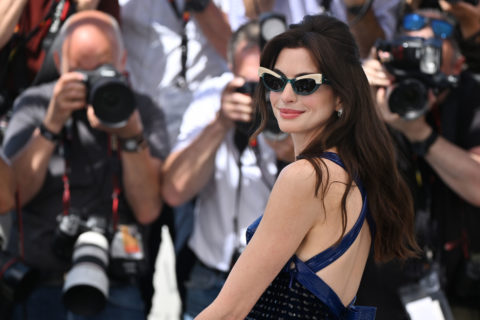 Anne Hathaway, a budding fashion icon? No one would’ve believed you if you had said those words five years ago. Supremely talented? Hello, she won an Oscar! Charming and likeable? You can’t convince me her and Mia Thermopolis from The Princess Diaries aren’t the same person. But a risk-taking style superstar? Not so much.

Boy, did she prove us all wrong at the 2022 Cannes Film Festival. With the help of her stylist Erin Walsh, she turned heads and dropped jaws in not one but five gorgeous looks, each more iconic than the next. Her first, and probably her best, was a custom Armani Privé white column skirt with a bandeau crop top and Bvlgari necklace. Next, she embodied a retro Gucci girl in a textured mini blue number and some killer shades. After a colourful Schiaparelli pantsuit and chic Louis Vuitton shirtdress, she ended her time at the festival with a hot pink gown by Valentino.

So what makes these looks so different from the Anne Hathaway fashion we’re all used to seeing? She (finally) isn’t afraid to take risks. The star quickly rose to fame as a teen after her iconic role in The Princess Diaries. Epitomizing “the girl next door” trope of the aughts, Hathaway’s fashion played a crucial role in perpetuating this image, with the actor wearing romantic silhouettes, ethereal fabrics and soft colours. Soon, she became the relatable lead that every woman wanted to be, with her fake royal family’s grace and style sensibilities.

But a few years later, Hathaway was one of the first victims of cancel culture. Calling themselves the “Hathahaters,” a group of internet trolls began to turn on the actor in the early to mid 2010s for her perceived fakeness and earnest demeanour. Whether or not the hate was justified or just a classic example of the industry’s misogyny, Hathaway went into hiding, both with her work and wardrobe. Seemingly afraid to draw any attention to herself, she always looked good on red carpets, but her fashion never seemed to inspire any “wows.”

Now with two kids and on the cusp of 40, Anne Hathaway seems to know exactly who she is. Her revived style journey started with a bang in 2021 when she shared three glamorous looks on Instagram in honour of her cancelled premiere for HBO’s Locked Down. And it has now continued into 2022, with notable numbers worn during her press days for We Crashed and at the Cannes Film Festival.

There are many great things about her fashion renaissance, like her experimentation with silhouettes and love of vibrant colour, but the best has to be her new attitude. She’s still the girl next door but evolved. She can be sexy and sultry and still have a megawatt smile. She looks comfortable and confident in her own skin, almost daring the world to say something.

And while the actor has access to the world’s top designers, hair and makeup teams, and stylists, there are a few tricks that anyone can use to up their style game. Below, FASHION lists three ways to take your wardrobe to the next level à la Anne Hathaway.

If you’re going hard with your outfit, keep your beauty light. At least, that’s how Hathaway manages to look effortless while wearing thousands of dollars worth of couture. Don’t fuss about a complicated hairstyle or a time-consuming contour; keep it simple with a fluffy blowout and a little lipstick.

Honour your past but look to the future

This look is so successful because it feels like an extension of Hathaway’s personality. Think of it as an updated and chicer version of the Girl Next Door. As she’s known for being endlessly bubbly, this matching set by Christopher John Rogers feels joyful and youthful without being preachy and defines the updated Anne Hathaway persona. So the next time you go shopping, think about what message you want to put into the world and how certain colours or patterns can help you achieve that. Does it feel like the old you, the new you, or a bit of both?

Can I guarantee that you will look fabulous in every article of clothing 100 per cent of the time? No. But then again, no one can; even Zendaya has off days. What’s important is you can’t be afraid to try. Hathaway is making headlines because she is trying something new, and in most cases, it’s working. Start small with a new style of top or bottom, and work in some of your old favourites.