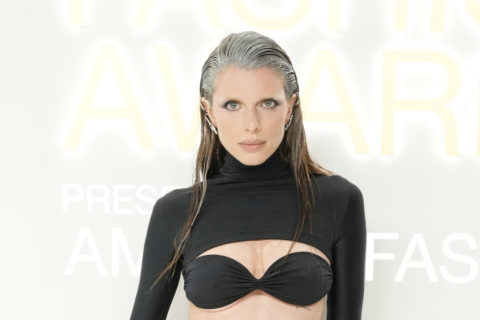 Trendsetter. TikTok philosopher. Feminist icon. Love her or hate her, Julia Fox is the subversive It girl the world needs.

You know what we don’t talk about enough? The sheer power of Julia Fox’s mind. She inspires trends, she invents makeup looks, and when need be, she’s not afraid to look “ugly.” Naturally, when attending the 2022 CFDA Awards — an event meant to honour personal style — Julia Fox was arguably the most on-theme.

On November 7, she emerged at the prestigious affair in a trailing black dress with oversized cutouts that left her undergarments completely exposed. Created by Milan-based designer Valerievi, the theatrical silhouette perfectly complemented her wet-looking hair that was painted grey as a “love letter to getting older.” The ensemble was cheeky, experimental and definitely not everyone’s cup of tea. That, right there, is the appeal of Julia Fox.

If you’ve been on the internet at all over the past year, chances are you’ve seen at least one viral style moment from the Uncut Gems star (nay, muse). On the red carpet, her elaborate outfits range from whacky to downright hazardous. Posed paparazzi pictures show her traipsing around in outfits that resemble the final product at an arts-and-crafts table. These skin-baring getups consistently look unfinished, unravelled and anything but functional. But the purpose here is not to be beautiful. It’s to be seen.

no thoughts just julia fox calling the paparazzi on herself. pic.twitter.com/mF3zLwX0T5

The thing is, Julia Fox is not trying to be conventionally pretty. In fact, she’s arguably trying not to be. Her bleached brows call to mind extraterrestrial visuals. In lieu of the celebrity spray tan standard, she embraces her pale skin, veins and all. Where the polished “clean girl” aesthetic reigns supreme, Julia Fox wholeheartedly embraces looking “dirty.”

While the star is often ridiculed in real time for her subversive style choices, her lasting influence is undeniable. After her signature chalky black eyeliner became a meme earlier this year, the messy makeup look resurfaced on multiple fall 2022 runways. And now that she herself is an in-demand model during fashion month, it’s clear her out-of-the-box aesthetic is onto something.

Don’t get us wrong, despite not adhering to mainstream trends, Julia Fox obviously fits into certain Eurocentric beauty standards: she’s thin; she has abs; she has clear skin and full lips. These physical privileges alone have likely helped her to go viral and accrue adoration for her purposely “ugly” looks. But despite possessing certain markers of traditional attractiveness, it seems Fox genuinely does not want to be palatable.

In an industry of trending filters, Photoshop fails, and highly curated influencer content, Julia Fox is the people’s It girl. Take her online presence. On TikTok, the star is beloved for her candid stream-of-consciousness content, while picture-perfect celebs like Kim Kardashian haven’t been able to crack the code. Sure, Fox may run errands wearing a torn-up trash bag, but her social media platform has become an intimate, safe space to ponder life’s big questions. She opens up about mental health in the bath. She theorizes about politics laying down in bed. She gives life advice while sitting on the toilet. Unlike the It girls of yore, Julia Fox is not a typical Hollywood bombshell. And that’s where her appeal lies.

she's back! and wrapped in garbage bags and wire hangers! pic.twitter.com/4CfwdjSDzO

After all, Fox didn’t exactly have a warm welcome to the world of mainstream stardom. When her highly publicized relationship with Kim Kardashian’s ex-husband Ye began in January 2022, the single mom was immediately positioned against the most powerful celebrity family in Hollywood. And while she was already well-known as an artist, actor and social butterfly in New York, to most of the world, she was an outsider. As such, Fox was harshly judged, with many accusing her of being an opportunist.

And perhaps she is — but what’s so wrong with that?

“Now, I don’t need men to like me. And that is a luxury that I earned by making men like me and find me desirable or interesting or attractive for so many years,” she said on TikTok. “No hate to the girlies that have lots of male followers. I used to be like that too. But now I’m at a place where… I just don’t give a f*ck.”

Understand this: Julia Fox is not here to look hot. She’s here to be an artiste. Her pre-planned photos are so obviously staged they’re almost satirical. Her shockingly uncensored social media posts are akin to a captivating one-woman show. The style icon has made a career out of curated performance art. It’s just that now, she no longer cares what the audience has to say.