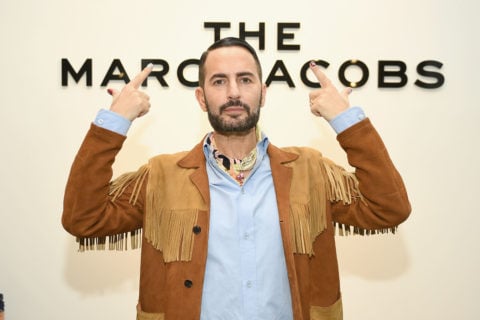 The designer took to Instagram to share a refreshingly candid, bandaged-up selfie with the hashtags #f*ckgravity and #livelovelift.

There are very few certainties in life, but perhaps the most obvious one is that everyone gets older, plain and simple. The aging process doesn’t care how much time, money, and effort you put into staying eternally youthful. Sure, you can keep certain signs of aging at bay, but in the end, biology will always win.

Through a very candid (and perhaps a little graphic) selfie, fashion royalty Marc Jacobs gave us a glimpse into his own relationship with getting older. Dressed in a helmet-like array of bandages, pumps and tubes covering his head, the designer appeared to be in a hospital room. While most who see this photo would naturally come to an alarming conclusion, the caption nonchalantly reads “Yesterday” with the hashtags #livelovelift and #f*ckgravity. Just a casual facelift!

Although a high-profile person of influence getting cosmetic surgery is hardly news, it was a breath of fresh air that the 58-year-old was so honest with his 1.6 million followers. How a celebrity stays so fresh-looking is usually shrouded in mystery, with the internet’s Sherlock Holmes wannabes trying to decipher “did they or didn’t they?” Clearly, Jacobs isn’t alone in his facelift, so why aren’t more famous people talking about their cosmetic procedures? And why does this photo of an American icon feel so defiant?

Quite simply, it’s all about transparency. In the era of Lizzo’s and Demi Lovato’s body positivity, embracing your age has been left somewhat behind. According to the 2020 Plastic Surgery Report, 234,374 people in the U.S. underwent the procedure in 2020… during a worldwide pandemic. Often regarded as a dirty little secret, admitting to plastic surgery is admitting to aging. The message until now being that if you have to age, please do it quietly where no one can see you. (And if you do get work done, do make sure it is adequate but discreet. Just look at the reactions to the cast of Sex and the City filming the And Just Like That reboot — Sarah Jessica Parker looks too old for some, while Kristin Davis looks overly injected to others. It’s almost impossible to win.)

By sharing his post-surgery selfie, Jacobs has reclaimed his agency and his power: He gets to control the narrative before the conversation has even begun. While the designer has always walked to the beat of his own drum, the Instagram post dared people to comment — to throw tired insults at him and wait for the proverbial mob to follow. What happened next was the exact opposite.

While the world anxiously anticipates Jacob’s reveal, we hope this is the start of healthier conversations surrounding plastic surgery. It’s time to own it and move on already.