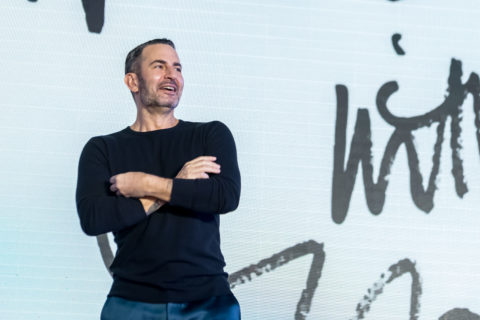 As one of the most innovative and important contemporary designers working today, we can't think of anyone more deserving of the award.

In a partnership between the MTV television network and the Council of Fashion Designers of America, Marc Jacobs will receive the Fashion Vanguard Award on August 26.

As one of the most innovative and important contemporary designers working today, we can’t think of anyone more deserving of the award. “For some reason Marc’s show is always the most important place to be seen, the one place where you know all the people who matter will be,” a fan of Jacobs’ once told the New York Times.

Marc Jacobs launched his namesake line in 1986 and has been pushing creative boundaries to their outer limits ever since. Perhaps the most memorable instance of his insouciant creativity was the 1993 grunge collection he did for Perry Ellis, where languid models strutted down the runway in oversized flannels and slouchy beanies. Though the collection led to his dismissal from Perry Ellis, it has become a fan favourite and key pieces from the collection were recently reissued in a special “Redux Grunge” capsule collection.

From 1997 to 2014, Jacobs served as creative director for Louis Vuitton in addition to running his own wildly popular line. At Louis Vuitton, Jacobs was responsible for some of the brand’s most memorable collaborations with artists, including a graffiti design by Stephen Sprouse and Takashi Murakami’s unforgettable rainbow monogram. And though the beloved Marc by Marc Jacobs diffusion line shuttered in 2015, its youthful, accessible designs will always be remembered for helping to define the cutesy, Gossip Girl-inspired aesthetic of the mid 2000s.

Jacobs is a particularly good candidate for the award considering many of his designs are heavily inspired by music. In a recent interview with Vogue, he recalls hearing “Smells like Teen Spirit” for the first time and being drawn to it in more ways than one. “Nobody had introduced me to Nirvana. It was like a magnet, and that’s how I feel a lot of my life was. It wasn’t something I sought out; it just affected me immediately. I had a primitive connection to Sonic Youth and Nirvana and a lot of other things at that time,” the designer says of his relationship with the ‘I Want My MTV’ generation.

So, besides winning prestigious awards, what else has Jacobs been up to? Just average stuff including designing the outfits for Cardi B’s legendary “I Like It” music video, teaching a fashion design MasterClass and attempting to become a YouTube influencer. What can we say, the man never stops.