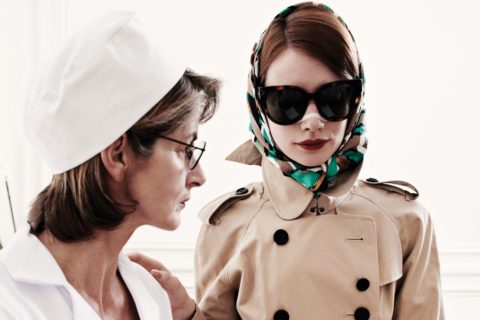 Why is Plastic Surgery Still So Taboo?

“Fear of judgment is a huge part of why [people] aren’t open about it. They think they’ll be perceived as vain or superficial.”

Imagine four girls in a pop group getting plastic surgery and documenting it in two music videos. In the first, “Getting Pretty (Before),” the girls get various beauty treatments and pick out new faces from the pages of magazines. In the second, “Getting Pretty (After),” they sing enthusiastically, post-operating room, as they show off their revamped eyes, noses, jawlines and breasts. Sound too shocking to ever happen IRL? In North America, land of the hush-hush tweak, it does. But the band, Six Bomb, is from South Korea, where plastic surgery is a celebrated part of the culture. So why, in our tweeting, posting, snapping, TMI times, is cosmetic surgery still kept on the DL?

It’s certainly not for a lack of partaking. According to The American Society for Aesthetic Plastic Surgery, dollars spent in North America on surgical and non-surgical procedures climbed from $12 billion in 2014 to over $15 billion in 2016, with an increase of $1.5 billion in the past year alone. Facelifts, nose jobs, chin implants, breast augs and butt lifts are booming. And injectables are so pervasive that Beverly Hills plastic surgeon Dr. David Hopp created GoToxNow, a service that makes getting Botox and fillers easier with its fleet of smart cars tricked out with portable chairs and syringe-wielding professionals. Yet, as a culture, we still have a reigning keep-it-to-yourself policy. Case in point: the Kardashians. Their lives are an open book, but keeping up with them doesn’t include witnessing the transformative nip-tucks suggested by a simple Google search and a set of eyes. Of course, some people buck the status quo: Lena Dunham penned an essay for Vogue about getting her eyebrows tattooed by permanent-makeup pro Dominique Bossavy, Hollywood’s go-to for “woke-up-this-way” brows, lips and eyes. And New York-based hairstylist Garren recently uploaded a shot of himself post-injectables on Instagram that showed him arm in arm with his dermatologist, Dr. Robert Anolik, crediting the doc (happy emojis and all) for the face tune-up.

YES AND YEAH ⭐️ FINALLY GOT MY FACE TUNED UP BY DR. ROBERT ANOLIK @drrobertanolik NOW I FEEL RESTED AND BACK IN THE GAME?⭐️❤️?#laser#fillers #botox and whatever he wants to do. Lol?????. @randcohair

“Garren is not the norm in openly sharing this information,” notes Anolik. “Many men and women are still private, even about these less-invasive procedures. I think fear of judgment is a huge part of why they aren’t open about it. They think they’ll be perceived as vain or superficial.” Vanity gets a bad rap, but it can be a healthy aspect of human nature. Isn’t it what makes us want to peacock that lingerie dress, vibrant shade of lipstick or brighter hair colour? “I remind women that there was a time that colouring your hair was something to hide,” says Manhattan-based psychologist Vivian Diller, PhD. “There was a famous ad in the 1950s [that said] ‘Only Her Hairdresser Knows.’ Now, men and women have no shame in sharing that they colour their hair. Still, vanity and femininity are more acceptable in some other countries, like South Korea, or Latin America. Women in Latin America will say ‘I’m going to Brazil to get my boobs done again,’ and they won’t think twice about sharing it. In our culture, vanity is viewed as a negative characteristic, and, as a result, many women hide how important youth and beauty are to them—even though these things clearly matter to most [people].”

Nowhere do these attributes matter more than in Hollywood, which sets a certain cultural standard—that youth and beauty may be achieved with a syringe and a scalpel—but the plastic surgery party line is “deny, deny, deny.” Or deflect. Ageless actresses sometimes feign admissions with “I tried Botox and it made me look crazy.” The implication: It was a one-and-done scenario. Look a bit closer, though, and the telltale signs (excessive bunny lines, a Spock brow or an odd absence of contractions) often suggest otherwise. And what A-lister ever admits to the nose job that may have transported her to iconic beauty status or a facelift done early, before major sagging occurred? In a rare case, rapper Iggy Azalea admitted to modifying both her nose and her breasts, and she boldly encouraged other famous insiders to join her in fessing up. Courteney Cox recently came clean, too, confessing that a friend finally helped her see that she was actually overdoing her anti-aging efforts and needed to lay off the fillers.

“Celebrities do like to hide it—even Botox. Or if they’re called out for having a nose job, they often say it was a breathing issue—that they had a deviated septum and needed a septoplasty,” says Toronto facial plastic surgeon Dr. Jamil Asaria. “I think it’s because natural beauty is still of value in our culture. With Botox, even the marketing materials are about aging naturally. That’s the language used. Otherwise, it’s a little taboo, as if it’s not really you and your looks were made by someone else. It can seem like cheating, in a way.”

As the masses seek to emulate celebs, there can be a trickle-down effect. “When a beautiful celeb denies that she does anything, it feeds into non-celebs wanting to hide it, too, because why should they need it—or admit to needing it?” says Anolik. Keeping it a secret, notes Diller, can help you avoid being the subject of scrutiny—whether pro or con. One group that’s unafraid to shed light on the complicated topic are comedians. In her new documentary, Take My Nose… Please!, Joan Kron, a journalist and former cosmetic surgery writer for Allure, observes that female comedians (think Joan Rivers, Phyllis Diller, Roseanne Barr) have long been the real truth-tellers of plastic surgery. The film follows one comedian (Emily Askin) thinking of getting a nose job and another (Jackie Hoffman) considering a lift and rhinoplasty. “Regardless of how you look, people are going to judge you, so you might as well like looking in the mirror,” says Askin in the film, which illuminates the vulnerability involved and questions whether choosing elective cosmetic surgery is about vanity or empowerment.

In our culture, it’s likely a bit of both. But in South Korea, the waters are murkier. All that openness and acceptance blurs with expectance, making it difficult to see the empowerment. Should more North Americans own their choice to surgically self-improve? Maybe. But in a world that is already hyper-focused on image and waning in privacy, maybe not.

Photography by David Burton/Trunk Archive
Get the best of FASHION in your inbox Thanks for signing up!
The latest fashion, beauty and celeb news delivered right to your email #FASHIONforall Now, check your inbox to complete your subscription
We won’t ever use your email address for anything else
Want even more FASHION? Follow us on social media.