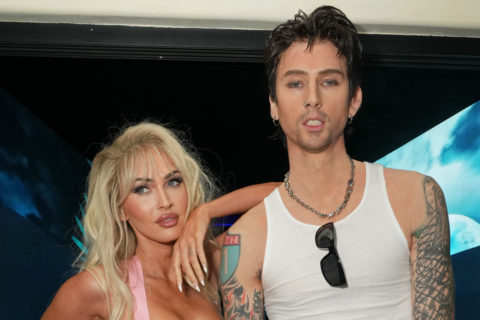 Why Is Halloween So Important to Celebrities?

From full-body transformations to real-life haunted houses, celebrities like to turn Halloween into a major spectacle. What's up with that?

If you’re like me, October 31 is a day to watch your favourite horror movies, eat an obscene amount of candy and slap together a last-minute costume for the sake of feeling involved. The finishing touch — and best part — of this annual tradition? Gawking at celebrity Halloween costumes. Because for the rich and famous, this is more than just any other holiday. It’s a challenge.

With the pressure of red carpet outfit rankings and best-dressed street style lists, getting ready for any old outing is like a sport to celebrities. So Halloween, in turn, is the Olympics. From wearing gravity-defying getups to spending hours undergoing makeup transformations, celebrities know how to make Halloween into a spectacle. And with the wholehearted return to in-person festivities, high-profile costumes in 2022 are making up for lost time.

Take Heidi Klum. From Ogre to ageing grandmother, the model’s yearly transformations have made her the “queen of Halloween.” And each year, the pressure to one-up — or at least live up to — her previous looks builds. Case in point: her highly-anticipated 2022 ensemble reportedly took 14 hours to create. “I can’t let my Halloween fans down,” she told E! News, calling this costume her best one yet.

Which Heidi Klum Halloween look is your favorite? pic.twitter.com/zWwW8dwNio

There’s such an urge to go viral, and it’s not hard to see why. Historically speaking, consistently high-quality costumes elevate a celeb’s street cred. Building a reputation for epic Halloween celebrations can take someone from A-list to icon. It’s why, each year, the Kardashian-Jenners give us special-effects-filled photoshoots and transform their mansions into elaborate haunted houses. Or perhaps why they continued on with maskless Halloween parties amid a raging pandemic.

Not to mention, extravagant celebrity costumes give the world another reason to keep talking about them. I can’t remember what I had for dinner yesterday, but I vividly recall Lizzo’s Baby Yoda costume in 2021. Naturally, this year, she continued her shock-factor legacy with elaborate transformations into both Marge Simpson and Miss Piggy.

When you’re famous, there are simply different parameters — and expectations — for Halloween. After all, if you wear a rubber catsuit to do some casual shopping, the bar is understandably higher when you’re actually expected to dress up. As such, festivities are not bound to the constraints of October 31. Celebrity costumes are often posted weeks in advance — because, of course, one is never enough.

This year, Kylie Jenner has had a myriad of over-the-top ensembles. She became the Bride of Frankenstein in a custom Jean Paul Gaultier bandage gown. She did a magazine-worthy photoshoot as Elvira, the Mistress of the Dark. She was superimposed into a cartoon poster as a latex-donning, alien-fighting space warrior. And she’s gone viral in each.

Then there’s the anonymity of it all. With prosthetics, elaborate makeup and shockingly realistic props, Halloween is a time when celebrities can revel in unabashed ugliness. In fact, looking conventionally “good” is frowned upon. Some of this year’s winning getups — like Janelle Monáe as Plavalaguna from The Fifth Element or Kim Kardashian as Mystique from X-Men — are objectively weird.

The thing is, at Halloween, celebrities’ knack for impracticality tends to come in handy. They can turn out imaginative looks without worrying about sensible everyday situations, like being stuck in a long line wearing uncomfortable shoes or taking weather conditions into account. In fact, it’s arguably the one time of year when being out of touch actually does some good. For famous people, Halloween is a competition; a way of performing their relevancy and putting their star status to the test. And fans are the ever-eager judges.

To us non-celebs, Halloween might be an opportunity to live out a fantasy for the day. But for celebrities, it’s a time of year when they get a break from being themselves. After all, stars are already donning costumes every day with meticulously crafted social media posts, pre-planned paparazzi shots and actual on-screen performances. Halloween, by contrast, offers the opportunity to trade the mundane mask of stardom for a more exciting one.

Every year, one of the most popular costumes among famous people is simply dressing up as other famous people. And 2022 was no exception. Lori Harvey was Beyoncé. Megan Fox and Machine Gun Kelly were Pamela Anderson and Tommy Lee. Addison Rae was Lady Gaga and Kate Moss. It seems Halloween and fame culture are inextricably linked. And perhaps that’s because, ultimately, being a celebrity is the biggest costume of all.