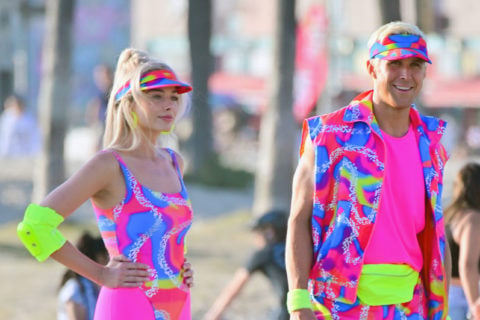 14 Group Halloween Costumes That Are of the Moment

Dust off your face paints and collection of wigs (you have one of those, right?), because Halloween is making a comeback in a big way. After two years of subdued celebrations, the spookiest night of the year is going to be spectacular — and you deserve the epic ensemble to match. But you know what’s even better than one great costume? Two or three or four! These group Halloween costumes scream “2022” and will make this year one to remember.

Though it released to mixed reviews on September 30, the new Hocus Pocus 2 is the only excuse you need to dress fashionably witchy this Halloween. Grab two friends, a trio of dresses and capes in jewel tones, plus a pair of false teeth and you’ll be set to cast spells. Sisters! Come, we fly!

With enough characters to fuel an entire themed party, to say nothing of a smaller group Halloween costume, Euphoria will be inspo for many a too-sexy-for-school look this year. Dress to impress in wild makeup, head-to-toe pastels, mini skirts or punk attire as worn by the students of East Highland High.

Feeling classy? What better way to live your “talk of the ton” fantasy than a Bridgerton-inspired Halloween costume. If you and your pals have been stashing tiaras, powdered wigs and empire-waisted gowns in your closets, it’s time to break them out. (Or, more realistically, pull out the sewing machine that’s been collecting cobwebs.)

With all the buzz surrounding Mindy Kaling’s upcoming animated series, Velma, the bookish sidekick-made-heroine is sure to be a top costume this year. Of course, if you’re looking for a group Halloween costume, the five-piece gang is an obvious choice. So, find some thick glasses, an orange turtleneck and a red skirt, plus a few like-minded friends, and Scooby-Dooby-Doo!

Netflix’s spin on the beloved Addams Family tale, Wednesday, is set to premiere on November 23. Until then, channel the family’s goth vibes in a group costume that features every member of the household: Morticia, Gomez, Pugsley, Cousin Itt and Lurch. It’s been done by Sophie Turner and Joe Jonas, as well as John Legend and Chrissy Teigen. Perhaps 2022 is your year?

With images from next year’s live-action film release popping up on social media, including a cowboy/girl look and a rollerblading scene, a Barbie-and-Ken duo makes sense for this year’s festive gatherings. Add Skipper, Stacie and Chelsea (Barbie’s sisters) and all their boyfriends for a group Halloween costume that works for up to eight people.

The Rose family has become iconic in the realm of Canadian TV and their OTT wardrobes are instantly recognizable. Moira’s known for her wigs, towering heels and avant-garde black-and-white ensembles. Johnny’s always in a suit. Alexis loves short dresses, big hats and anything with a bit of boho flair. And David takes after his mom: black-and-white looks that are one or two steps ahead of the trends. If you fell in love with the characters of Schitt’s Creek on Netflix throughout the pandemic, this might be the group costume for you. (We’ve gathered all the most memorable looks from the show to make things extra simple.)

Elvis and his fans

Austin Butler stunned audiences with his portrayal of Elvis Presley in Baz Luhrmann’s Elvis biopic, reminding us all what made “The King” so legendary. This Halloween, grease back your hair, don a blousy suit and sling a guitar over your shoulder and you’ll be ready to shake your hips. Just don’t forget the Priscilla to your Elvis-the-Pelvis, not to mention your gaggle of adoring fans.

Ben married Jen in the wedding of the year, so just about any costume that centres the two lovebirds feels timely. Their outfits from the 2021 Met Gala, which featured custom face masks, were particularly memorable (and perfect for a staged photo opp), but you could also go for the Y2K looks in JLo’s “Jenny from the Block” video or their box-office bomb, Gigli.

House of the Dragon

A post shared by House of the Dragon (@houseofthedragonhbo)

Game of Thrones offers an abundance of Halloween costume fodder, but if you want to be ahead of the curve, use House of the Dragon for this year’s inspiration. You’ll need white wigs, natch, plus medieval attire. (Hint: Vests, high necklines and heavy gold jewellery will help complete the look.)

Stranger Things continues to be one of the most-talked-about shows on Netflix, making a group costume that features the main characters an instantly recognizable choice for Halloween. Since the show is set in the ’80s, you’ll need scrunchies, striped polos, plaid shirts tucked into high-waisted jeans, mullet wigs and dolphin shorts. Of course, you can’t go wrong with Eleven’s hospital gown and bloody nose, either.

You could opt for a Dolce and Gabbana–inspired group costume to imitate Travis and Kourtney’s Italian wedding, but nothing will be quite as iconic (OK, bizarre) as TB and KK making out alongside Megan Fox and fiancé Machine Gun Kelly in a bathroom last year. It’s a fun costume for two couples or four friends to whip up, faux tattoos absolutely mandatory.

Since snaps of season three’s costumes were released, we’ve been counting down the days until Emily in Paris returns to Netflix on December 21. In the meantime, channel the melodramatic energy of Emily, her co-workers and friends in colourful, clashing outfits and accessories.

All the world’s a catwalk if you’re wearing the right heels — and they better be sky-high if you want to portray Mama Ru, Michelle Visage and Carson Kressley this Halloween. Of course, you’ll need a towering wig or two as well (as RuPaul’s stylist says, the RuPaul look is “big blond hair, a teeny-tiny waist and long, long legs”). But the real clincher for this group costume? It’s sharp wit and spot-on critiques. So if you dress to the nines, then plunk yourself at a table and judge the looks of all the other party-goers… well, we’d think that was pretty funny. Good luck and don’t f*** it up.