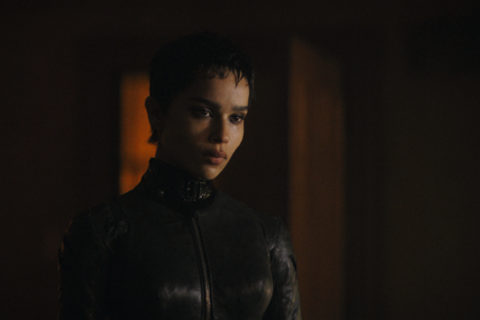 The Enduring Legacy of the Catsuit

When it comes to the archetypal femme fatale, Catwoman reigns supreme.

The complex character — who walks the line between villain and antihero — represents power, independence and perseverance. All of these traits are embodied by her signature outfit: the catsuit.

Since The Batman was released in theatres on March 5, audiences have been transfixed by Zoë Kravitz’s performance as the infamous Selina Kyle. And while her uniform has been reimagined many times over since 1940s, the catsuit’s novelty has never waned. This is thanks (in part) to fashion’s fascination with felines.

By nature, cats are smart and independent, but these coy companions are often misjudged. Cats have long been used by fashion designers, and thus, have been associated with women, but the animals have a complicated history falling in and out of public favour.

In many ancient cultures, cats were revered in mythology and tied to blessings like fertility and protection. But in medieval Europe, they became associated with witchcraft, hence the black cat’s reputation of bad luck. In the late 1800s, Queen Victoria helped bring felines back into public favour when she had her cats treated as members of her royal court. The animals then began to be regarded as pets, and cat imagery in fashion marketing took off.

In more recent history, cats have been used to negatively portray women (we all know the  “crazy cat lady” trope). On the other hand, they’ve been used to represent disruptive women, having been used by the suffragettes and lesbian rights movements in the 1900s. Thanks to their associations with unconventional ideas of womanhood, cats have become an inherently feminist symbol.

Fashionista notes that cats have also garnered comparisons to luxury shoppers, thanks to their finicky personalities, autonomy and overall chicness. That’s perhaps why felines are consistently referenced on the runway, embedded in fashion vocabulary (cat-eye, catwalk, kitten heels). This bring us back to the catsuit, and why it remains one of the most iconic outfits of all time.

Since then, they’ve been a marker of strong women in film series like The Matrix, Kill Bill and, of course, Batman. But this particular feline aesthetic has also been heavily sexualized, with the catsuit regarded today as the ultimate salacious Halloween costume.

The catsuit has an alluring mystique that reclaims assumptive narratives surrounding cats and womanhood. While its form-fitting silhouette is inherently feminine, it also invokes an air of power and authority.

With the release of The Batman, the feline maintains its powerful hold on the world of fashion. Over the past year, catsuits have been having a major style resurgence, with stars like Kim Kardashian and Rihanna opting for campy, bright versions of the piece.

The dramatized cat-eye has also recently been highlighted in pop culture, thanks in part to Julia Fox’s contentious smudged inky makeup look which has been replicated on runways throughout Fashion Month.

As new Catwomen come and go, Selina Kyle’s alter-ego is forever marked by the catsuit she wears. In the ‘60s, the Catwoman suit was definitively more beautified, from Julie Newmar’s chunky jewelry to Eartha Kitt’s done-up ponytail. Michelle Pfeiffer introduced the ultra-sexy catsuit in 1992, complete with stitches and shiny latex. Halle Berry’s 2004 take on the suit comprised an edgy stomach-bearing latex ensemble, while Anne Hathaway’s 2012 reprisal of the role involved an athletic full-body zip-up.

halle berry as catwoman in 2004💫 pic.twitter.com/8VWPHECrSs

Zoë Kravitz’s Catwoman suit is less flashy than her predecessors. Because Kravtiz hasn’t taken on the Catwoman moniker in this film, her costume is DIY, featuring a durable backpack and a cut-out mask that she made herself. Personality-wise, she portrays a more vulnerable Selina Kyle, assuming the role of co-lead instead of the villain she’s been known as in previous films.

The catsuit represents the complex relationship between feminine energy, felines and fashion. With each new iteration, Catwoman captures the often misunderstood nature of cats with her elusive demeanour and edgy attire. It’s no wonder our obsession with her uniform never gets old.

Photography courtesy of Warner Bros. & DC Comics
Get the best of FASHION in your inbox Thanks for signing up!
The latest fashion, beauty and celeb news delivered right to your email #FASHIONforall Now, check your inbox to complete your subscription
We won’t ever use your email address for anything else
Want even more FASHION? Follow us on social media.