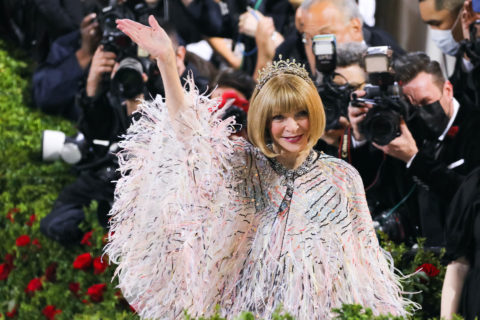 Who is the Real Anna Wintour? This New Biography Tries to Find Out

Where did Anna’s ice queen reputation come from? Is there any truth to “The Devil Wears Prada”? Why is the Met Gala such a big deal? All these questions get answered in Amy Odell’s new book “Anna: The Biography”

How do you even begin to write an Anna Wintour biography? This is the question that plagued Amy Odell, Cosmopolitan.com’s former editor and creator of The Cut, back in 2018. “I thought that was an opportunity to separate Anna, the icon, from Anna, the actual person,” she says over the phone. And that’s precisely what this book does — it demystifies the woman hidden behind the bob and designer sunglasses. In fact, the very first page is about the protagonist crying at a staff meeting the morning after Donald Trump was elected President of the United States in 2016.

Anna: The Biography feels like the final book in a three-part series of iconic fashion figure tell-alls — the first being Grace Coddington’s 2012 memoir and then Andre Leon Talley’s biting autobiography in 2020. To be sure, Wintour’s rise to fame in the golden age of fashion publishing is meticulously chronicled, and those who have read all three books will be sure to get a kick out of the different perspectives of certain events. But where Odell’s book really shines is in its study of the Vogue matriarch’s life off the clock: Wintour’s relationship with her mother, her friends debating whether she’s an extrovert or an introvert, and a comprehensive history of her dating life. It’s truly as juicy as it sounds!

Below, FASHION spoke with Odell about all the gossip from her new Anna Wintour biography, like where the iconic editor first got her icy reputation, how accurate Meryl Streep’s portrayal was in The Devil Wears Prada, and just how much control she has over the Met Gala.

Anna: The Biography feels so effortless to read, but I can imagine that actually writing a book on perhaps the most significant fashion icon of all time was not.

It was extremely difficult [to write an Anna Wintour biography]! I started working on this book in 2018, and when I first started making calls and putting out inquiries, about half the people said, “Anna’s going to do everything she can to shut this down. You don’t have a chance.” Then the other group said, “Oh, I’m sure she’ll help you.” And luckily, they turned out to be correct. Although Anna declined several requests for an interview, her team sent me a list of her closest friends and colleagues to contact. Once everyone heard that Anna was involved, anyone who had previously hung up on me returned my calls, and I interviewed more than 250 people, many of whom had never spoken at length about Anna on the record before. So, yes, it was a lot of work but rewarding and completely fascinating every step away.

Why did you write a biography about Anna Wintour now and not, say, in a few years if/when she ever retires?

I thought the opportunity with this book was to explain Anna Wintour’s power. She’s been at the helm of Vogue for 34 years. Getting to the top is one thing but staying there for that long is quite another. And despite being in the public eye for that extraordinary length of time, she remains an enigma even to the people who know her. So I wanted to pull back the curtain on this fascinating figure.

Have you ever met Anna?

I’ve met with her twice, and I wrote about the first time in my other book, Tales from the Back Row. She was perfectly fine, just don’t expect any small talk. If you get 15 minutes with her, that’s considered a long meeting.

There are many very different and extreme opinions about Anna, which you cleverly include in the book. In one of the first chapters, you note that her friends even argue if she’s an introvert or an extrovert. Why do you think she inspires such different reactions?

Anna’s very tricky because she doesn’t talk about herself. One of her friends told me that she doesn’t dwell on the past — she just keeps moving forward. I can’t speculate about what’s in her head, but we all show different versions of ourselves to different people, like when we’re at work, at home or with friends. She’s just particularly good at compartmentalizing.

I interviewed Stephanie Winston Wolkoff, who had planned the Met Gala with Anna for more than ten years, and she said they had a personal relationship outside of work. But as soon as they got to the office, it was completely different, and Anna would be icy. Stephanie was okay with it, and I think if you accept that, then it helps you with Anna.

For our readers who haven’t yet read your Anna Wintour biography, can you talk about where Anna got her ice queen reputation?

I would trace it back to the mid-eighties when she became editor-in-chief of British Vogue. There was so much gossip around her because her father, Charles Wintour, was a well-known editor of the London Evening Standard. People were so scared of him that he was given the nickname “Chilly Charlie.” It was that parallel between him and Anna that the press picked up on.

But at the same time, the way she went about editing British Vogue led her to be called “Nuclear Wintour.” The magazine ran the same way for a very long time, and she wanted to revamp it. She had no problem changing the staff, cutting columnists and completely altering its look. And my impression is that it was totally alien to the British publishing world to operate like that, so it was quite a shock.

So then, how accurate is Meryl Streep’s character in The Devil Wears Prada?

The Devil Wears Prada is fantastic entertainment, but it’s a one-dimensional view of Anna. She does intimidate people, and [when she walks the halls of the Vogue office], I was told that some people do press themselves up against the wall because they’re scared of her. But what she responds to is if people on her team talk to her like she’s a normal person. And one of my favourite stories from the book is how Anna wore Prada at the film’s screening in New York. She actually has quite a cutting sense of humour.

What was the most surprising thing you learned about Anna during the writing of this book?

Anna has an extensive network of powerful people who are loyal to her and who seek her advice on things. For example, Bradley Cooper talked to her before talking to Lady Gaga about his film A Star Is Born. Hugh Jackman wanted Anna’s thoughts on The Greatest Showman when he was putting it together. And Serena Williams even said that Anna’s tennis advice enabled her to win Wimbledon.

And finally, in honour of the Met Gala, you mention in the book that this is truly where Anna’s power manifests itself. Can you expand on that?

When we look at the Met Gala, we see a group of famous and influential people who are only there because Anna invited them. She literally chose them. So the event is a physical manifestation of the powerful network she has been building for 30 years. And celebrities are clamouring to get into that network! As I say in the book, Kim Kardashian tried to get into the Met Gala for years. Then, of course, she did after her cultural relevance had become so significant that it was impossible for Anna to ignore her.