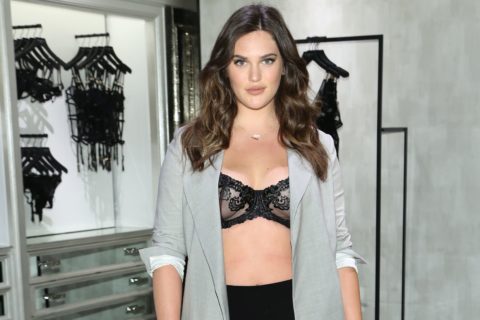 Ali Tate Cutler, who has previously modelled for Reformation‘s extended sizing range, is the model on whom the honour has finally fallen.

Cutler appears alongside some of the brand’s Angels as part of its new campaign for the Bluebella collaboration. Taking to Instagram to share a shot of herself from the campaign, Cutler wrote, “I believe I’m the first size 14 on Victoria’s Secret? Regardless I’m pretty stoked to work with a brand I idolized when I was a teen. Great step in the right direction for bodies.”

It’s welcome news from the brand, whose former chief marketing executive Ed Razek said late last year that no one had any interest in seeing extended sizes or transgender models in the brand’s line-up.

The news comes amid an image makeover for the storied lingerie brand. Earlier this year, it hired its first curvy model, Lorena Dunn, followed by its first transgender model, Valentino Sampaio. According to multiple reports, the brand’s annual fashion show has been cancelled for 2019, however this news is yet to be confirmed by the brand.

Cutler’s post on Instagram has received plenty of love, including from fellow curvy model Robyn Lawley. In an earlier post, the model shared a body positive message with her 123,000 followers, writing: “Feeling at home in your body means you have one less thing to worry about in a world that is prone to worrying. That’s not to say we shouldn’t all strive to eat well, keep our bodies active and keep our vessels in good working order. But when we do indulge in a lavish dinner, or when we see a photo of ourselves that doesn’t exactly reflect what we want to look like – it means easing up. Releasing judgement. Operating from a space of understanding and love is the way, especially about ourselves.”