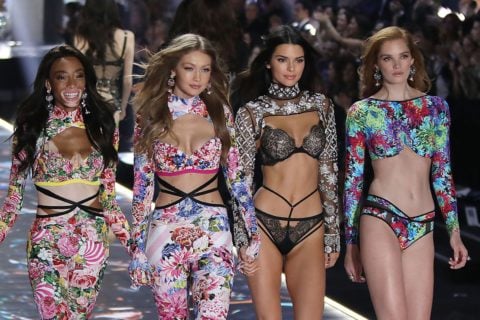 Everything That Upset The Internet This Week

What is the web-o-sphere angry about this week? One man’s idea of fantasy, another man’s desire to be 20 years younger and a classic animated ogre returning to the big screen. Here’s everything you need to know.

THE STORY: Ahead of this year’s Victoria’s Secret Fashion Show, Vogue spoke with Ed Razek, the brand’s chief marketing officer, and Monica Mitro, executive vice president of public relations. When asked to comment on the shifting interests of customers (i.e. diversity), Razek is quoted saying: “So it’s like, why don’t you do [size] 50 [bras]? Why don’t you do 60? Why don’t you do 24? It’s like, why doesn’t your show do this? Shouldn’t you have transsexuals in the show? No. No, I don’t think we should. Well, why not? Because the show is a fantasy. It’s a 42-minute entertainment special. That’s what it is.” At another point in the interview, he laughably tries to take credit for Rihanna breaking barriers with Savage x Fenty. HA!

This is a fucking mess…also, who says trans people can't be fantasized about? So bad. I haven't shopped at VS for years for a variety of reasons and I'm glad my money is going elsewhere.

An 80 year old man owns the company and a 70 year old man runs it. And their archaic perspectives – on women, on gender, on plus size folks, on trans folks – are making VS a worse brand by the day.

RIGHTEOUSNESS OF THE RAGE: Yup, this outrage was warranted. What exactly is the fantasy, here? Are we, the paying customer, suppose to fantasize about ourselves in this lavish lingerie? Because last I checked, all women wear underwear—not just thin, cis-gendered women. And while I have the utmost respect for the models who work hard to walk in the VS show, they aren’t representative of all Victoria’s Secret shoppers. They know it, we know it, and Victoria’s Secret knows it, too.

In response to the backlash, this apology was issued:

Or, as Twitter user @VABVOX summarizes, “SHORTER RAZEK: ‘I’m sorry I got called out for my remarks about trans models who are on EVERY runway from Paris to Milan but mine. As for the fatties, I’m not even bothering with apologizing to them, even though the average American woman is a size 14, because no one cares.'”

THE STORY: Emile Ratelband, a 69-year-old Dutch “positivity trainer,” has launched a legal battle to change his age to 45. “We live in a time when you can change your name and change your gender. Why can’t I decide my own age?” he said. His argument is that he’s being discriminated against because of his age, noting how it affects his employment chances and his success rate on Tinder, the dating app.

A 69 year old man wants to legally change his age to 45 because he identifies as a 45 year old.

Just saw a headline there about a man entering a lawsuit to legally lower his age as he identifies as a 45 year old rather than 69. I thought it was a joke but its genuinely serious. The world's fucking nuts

Some dumb fuck who feels insecure about their age: im trans-age! I dont identify as 69 years old, im living in a 45 year old body
GREAT FOR YOU FOR FEELING HEALTHY AND YOUNG BUT NO. TRANS AGE IS NOT A THING. THIS JUST PAINTS A BAD PICTURE FOR THE TRANS COMMUNITY. TED TALK, OVER

RIGHTEOUSNESS OF THE RAGE: Ageism is a real thing. Particularly in a youth-oriented work culture, where the positive attributes of older employees are are sometimes crowded out by negative stereotypes. And, despite what you may have seen on Age Gap Love, age is a number people tend to care about in the dating sphere.

But it really feels that in bringing this to court, Ratelband’s goal is to delegitimize trans rights. Being transgender is not a choice. By “choosing” to be a 45-year-old, is Ratelband choosing to live a life that risks him facing daily abuse, discrimination and prejudice? Is his age dysmorphia causing him extreme distress? At what point did he decide he was 20 years older than what is stated on his birth certificate? I don’t know the answers to these questions, but I’m interested in seeing how the court case—and the conversations surrounding it—develop.

THE STORY: In a recent Variety profile, Chris Meledandri, the founder of Illumination Entertainment, revealed that he would be rebooting the Shrek and Puss in Boots franchises. Meledandri, who is best known as the creator of Despicable Me, said in the interview that his task for Shrek is to craft new storylines that will re-introduce the beloved ogre to new movie audiences.

Who asked for this? There is nothing wrong with OG Shrek. Leave the good things alone. https://t.co/q1kT9stkU4

what the FUCK do you mean "reboot Shrek"?!

RIGHTEOUSNESS OF THE RAGE: The Shrek reboot was inevitable. It sucks, but it’s the new normal in the oh-so-unoriginal Hollywood. The reboots start coming and they don’t stop coming…

Their best bet might be to just hire Bradley Cooper and Lady Gaga as voice actors. Those two seem to know how to make a reboot work.