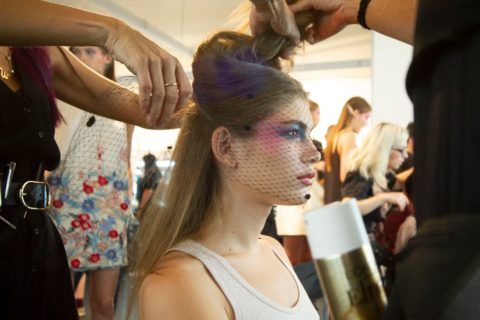 Victoria’s Secret Has Cast Their First Ever Transgender Model

Lingerie brand Victoria’s Secret has hired their first openly transgender model, Valentina Sampaio. Sampaio’s agent officially confirmed to CNN yesterday that the model had been cast for an upcoming campaign for the brand’s PINK line.

Reports sparked when the Brazilian beauty took to her Instagram to post a backstage photo, tagging @vspink. She later then posted a video to her Instagram, captioning it, “Never stop dreaming genteee” and using hashtags in the caption such as #staytuned and #diversity. The model had previously attended a casting call for the 2019 Victoria’s Secret Fashion Show last August, however this will be her first time officially working with the company.

The news was flooded with support from both the fashion and LGBTQ+ communities. Victoria’s Secret Angel Lais Ribeiro shared her excitement on Twitter, while Laverne Cox commented, “Wow finally!” on Sampaio’s Instagram.

Being Victoria’s Secret’s first transgender model happens to be just another monumental milestone for the 22-year-old. Sampaio previously made history by being the first transgender model to grace the cover of French Vogue in their March 2017 issue. Later that year, she also appeared on the covers of both Vogue Brazil and Vogue Germany. Now with this latest Victoria’s Secret PINK campaign, Sampaio is pushing boundaries yet again.

This month we are proud to celebrate transgender beauty and how models like Valentina Sampaio, who is posing for her first ever Vogue cover, are changing the face of fashion and deconstructing prejudice. Valentina Sampaio photographed by Mert Alas & Marcus Piggott, styled by Emmanuelle Alt, with make-up by Isamaya Ffrench and hair by Paul Hanlon. Out February 23rd. @emmanuellealt @valentts @mertalas @macpiggott @isamayaffrench @paulhanlonhair @YSL #emmanuellealt #ValentinaSampaio #MertandMarcus #isamayaffrench #PaulHanlon #SaintLaurent

Having a transgender model represent Victoria’s Secret, a brand that is known for dictating mainstream beauty standards, should be nothing but good news. However many are hesitant about the campaign, and worry that this is all just an effort for the company to rebrand.

Victoria’s Secret has received constant backlash in recent years for their lack of representation. Although we have started to see more racial diversity with their choice of models, the company’s fashion shows and campaigns have still heavily lacked the inclusion of different body types.

The brand specifically went under fire last year after Ed Razek, Victoria’s Secret’s chief marketing officer, stated in an interview with Vogue that he didn’t believe that the Victoria’s Secret Fashion Show should include transgender models. He went on to say that the show was a fantasy, alluding that transgender women don’t provide this same allotted fantasy.

Despite Razek later apologizing in a statement, his transphobic comment came at a time where the brand’s hyper-sexuality and lack of diversity had faced continuous criticism. Viewings for the 2018 Victoria’s Fashion Show fell to an all time low, and was accompanied with declining sales in-store.  This year’s 2019 show has also supposedly been cancelled. It was reported that Razek recently stepped down from his position, as news of his resignation allegedly broke this Monday.

While we wait for the release of Sampaio’s highly anticipated campaign, it will be interesting to see if Victoria’s Secret is genuine about this shift towards diversity and dismantling stereotypes about conventional beauty, or if this is just an attempt to reshape their brand towards a modern consumer.

Photo by Mortimer Peterssen/DYDPPA/Shutterstock
Get the best of FASHION in your inbox Thanks for signing up!
The latest fashion, beauty and celeb news delivered right to your email #FASHIONforall Now, check your inbox to complete your subscription
We won’t ever use your email address for anything else
Want even more FASHION? Follow us on social media.