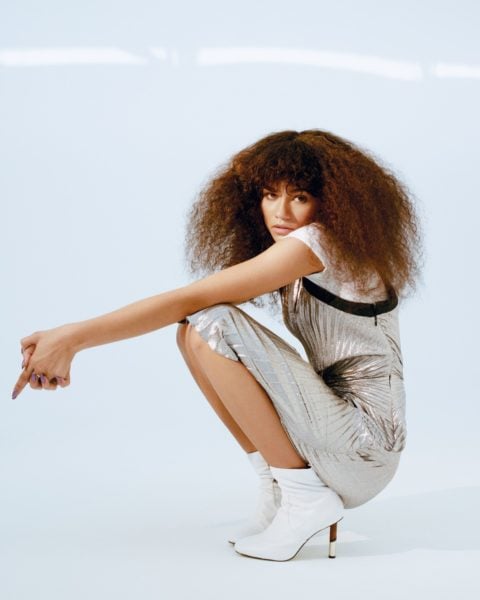 The actress, model and all-around star is making her own decisions, thank you very much.

We are the stories we tell. And so, right now, in this skylit studio, sitting across from Zendaya—who has returned to her natural state, wearing simple black leggings and Nikes instead of a Versus Versace dress and Casadei boots—my job is to hear some stories. It’s not as easy as you might think.

While the intensity of the attention around her has increased since she became an unofficial fashion muse and a CoverGirl ambassador and started owning red carpets (from the Oscars to the Met Gala), Zendaya, 21, has been in the spotlight since she was a tween. She’s charmingly loquacious, but she doesn’t offer up much in the way of stories. There’s one, however, that she shares that encompasses and exemplifies who she is.

It turns out that Zendaya was in a Kidz Bop video when she was younger. In case you don’t remember Kidz Bop (similar to Minipops, a show that was popular when I was a kid), the premise was simple: Get anonymous kids to sing Top 40 hits and then make child-friendly music videos for each track. Yes, the video is on YouTube. And yes, it’s as awkward as you would imagine preteens dancing in front of a green screen would be. But Zendaya shows undeniable charm.

“It wasn’t actually me singing as a kid. But I did the video for it, and I remember I was feeling a little weird that day,” she says. “It was one of my first jobs, and all the kids could do these crazy things. They could do flips or spins or something cool, right? And I just couldn’t. I was a normal dancer. I had charisma, but I could only dance. I remember all these kids were trying to be sick, and I was like ‘I gotta step it up a notch because these kids are really killing it.’ For some reason, I decided to do a front flip. Never did one before in my life, other than inside my living room playing around. Thank God I landed it! It could have been terrible, but it ended up working.”

You could hardly ask for a better bit of foreshadowing. The combination of confidence, surprising talent and luck is still at the root of Zendaya’s success. You’ll find that combination in varying degrees in most people who make it. Whether Zendaya is a name in your household depends equally on how many tweens and fashion junkies live there.

As a kind of dynamic duo, Zendaya and her stylist, Law Roach (who recently performed a style miracle with Céline Dion), have parlayed her acting and singing roles in Disney Channel shows into impressive fashion moments that have brought her attention for not only how she looks but also how she intelligently defends and discusses how she looks. The most famous, for instance, was after the 2015 Academy Awards, when she clapped back against Fashion Police’s Giuliana Rancic, who had made some tone-deaf quips about Zendaya’s dreads.

She has strategically moved into films, starting with 2016’s Spider-Man: Homecoming. She stole every scene she was in despite looking like she had never seen a CoverGirl ad, let alone starred in one. And now she’s demonstrating the range of her abilities—even working the trapeze—next to fellow triple threats Hugh Jackman and Zac Efron in The Greatest Showman. What kind of woman is Zendaya? She’s the kind who imagines what she needs to do and then does it, confident that she’ll pull it off regardless of what it is.

I ask her if the flip made it into the Kidz Bop end product. “I don’t know who made it into the video,” she says, almost disappointed—like she’s a parent who just imparted a hard-won life lesson to her toddler and is surprised by her kid’s lack of attention. “But, listen,the fact that I stepped it up is the point. I was very competitive—but healthy competitive.”

We are the stories we tell, and Zendaya isn’t going to have her stories misunderstood. It’s a way of speaking espoused most often by teachers, coaches and authority figures: people who already understand who they are talking to those of us who are still finding our way.

“I think I’ve always been a grandma,” she explains. “I’ve always been a very old woman inside a younger person’s body. Of course, I have my young-people tendencies; we all have those. But at the end of the day, I’ve always been called a grandma. I don’t like going out. I enjoy the company of my TV and myself. And you know what? It’s been very helpful, honestly.”

“I’ve always been a very old woman inside a younger person’s body. Of course, I have my young-people tendencies; we all have those. But at the end of the day, I’ve always been called a grandma.”

But her grandma tendencies go deeper than her weekend plans. Instead of sharing stories, she responds to most questions with the kind of positive messaging you’d expect from a politician: light on details but strong on platitudes. If she were a politician, it might come off as insincere, but coming from Zendaya, a young Disney-bred actress who has yet to display a hint of Miley-style rebellion, it feels earnest, honest and, if you can drop your own cynicism, wise.

“I definitely try not to think about the pressure because you can choose to think of it as ‘OMG, there’s so much pressure to be this…’ or you can think of it as a gift,” she says. “It’s a motivation; it’s something that makes you want to be better and work harder. I try to think of it that way. Of course, I’m only human, so sometimes I get stressed out. But I think my number one responsibility is just growing day by day, learning and becoming a better human being. All of this is great, but all of this can go away. At the end of the day, you are stuck with you, and that’s the person you are. So I would much rather work on who I am and be happy with the decisions I make, what I choose to speak up about, what I choose to be vocal about and what I choose to put out there, because I would much rather that people know me as a person than as my last project.”

Zendaya is an aggressively good role model. It’s a mantle that can seem uncomfortable on a lot of celebrities, including—and especially—those with a sizable kid following. But Zendaya wears it like she wears gowns by Ralph & Russo—like the concept of the celebrity role model was designed specifically for her. “I like to think that in some divine way, I don’t know how, the universe decided I was a good person to do this because I’m a good person,” she says. “And I guess the universe knew—if we’re accepting that that’s a thing—that I would try to do something good with what I’ve got and I’d be able to handle the pressure.”

And while a lot of famous people probably engage in this kind of magical thinking to make sense of why, out of the millions who try, they were chosen to succeed, Zendaya makes a plausible case for the existence of some Great Casting Director in the sky. Or maybe she will come to represent a new kind of celebrity—one that is sufficiently grounded, motivated and confident to withstand the pressures and temptations in a way we aren’t used to.

Maybe, in the same way that modern reality-show contestants naturally hit all the right beats and say all the right things on their shows because they’ve been raised on Survivor and Project Runway, Zendaya will have learned from the Disney starlets who came before and so she won’t become a cliché. This turns out to be the biggest test of Zendaya’s anti-cynicism: Is it safe to believe that Zendaya will be different?

Although, does it really matter? Expecting fallible people to live up to impossible standards solely because they are famous is as useless as it is predictable. Especially in our outrage culture, where it seems one can’t be famous without being problematic. Right now, by standing up for racial equality and positive gender representation, Zendaya is demonstrating her intelligence and empathy and using her celebrity in exactly the right way (unlike, say, Taylor Swift, who earned criticism for flying the flag of female em­powerment while being noticeably silent on Donald Trump’s pussy-grabbing).

You don’t have to scroll far through her Instagram to see her posting in solidarity with protesting NFL players, raising funds for Hurricane Harvey or calling for better gun control in response to Las Vegas. You also don’t have far to go before she mentions Pres­ident Trump’s “many sides” defence of white supremacists. Zendaya speaks out the way other people might talk about their new significant other: It slips out in every context because it’s always on her mind.

This might be the difference between Zendaya and so many of the other multi-talented wunderkinds pumped out by the House of Mickey: She isn’t putting on a persona or fitting into a narrative created for her. She’s authentic.

“It’s just my personality,” she says. “Like, my 21st birthday is going to be at my house, with my family and friends. There will be no alcohol—I mean, people can have alcohol if they want it, but I’m not going to be drinking any. My little nieces and family are going to be there. For me, a Vegas version of my birthday would be like hell.”

She has shown the same commitment to freethinking authenticity in her career choices, too. “Anytime I’ve ever done something to please somebody else or make other people happy, or do what I think other people want me to do, it always blows up in my face. And it’s bullshit!” she says. “When I wanted to break into movies, there were tons of projects that came my way that probably would have been good because it was a good paycheque. But because I wasn’t known in this area, I was able to start fresh and really make the decisions that I wanted to make and do the things that I wanted to do without anybody’s opinions but my own.”

As far as stories go, that’s not a long one, but, still, it’s pretty good. A young woman who is the master of her fate—or at least of her narrative. What makes the story even better is that it’s true.

Find Zendaya on the cover of FASHION Magazine’s Winter 2018 issue, on newsstands November 20.