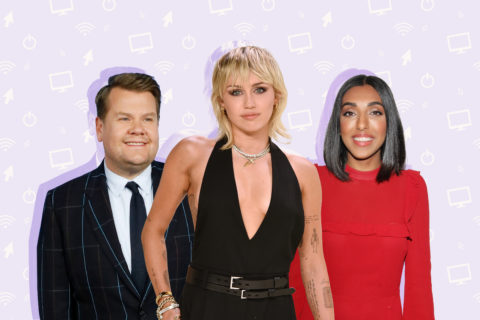 Here’s How Celebs Are Creating an Online Community During Lockdown

With the coronavirus sweeping through countries across the globe, responsible citizens everywhere are self-isolating, retreating into their homes to help stop the spread of the virus. Despite these vital measures of social distancing, celebrities are finding a way to connect with their fans: by creating an online community for people to gather—virtually—and engage in shared moments. Read on for how musicians (like Miley Cyrus, Shawn Mendes and Elton John), artists (including Indian-Canadian poet Rupi Kaur) and actors (like Sir Patrick Stewart) are using their social media platforms to bring people together.

Miley Cyrus
Miley Cyrus has launched a daily talk show on her Instagram called Bright Minded, whose aim is “Connecting w/ special guests discussing how to stay LIT in dark times!” Cyrus goes live each day from Monday to Friday at 11.30am PST/2.30pm EST, and guests so far include Reese Witherspoon, Demi Lovato, Jeremy Scott and Hailey Bieber. Today, her show kicked off with a cooking lesson from Antoni Porowski, who’s hosting his own quarantine cooking show on IGTV, before segueing into a songwriting workshop with Mark Ronson, Ryan Tedder and Ilsey Juber.

Rupi Kaur
A month ago, Indian-Canadian poet and author Rupi Kaur was filming her first poetry special in Los Angeles. Just a few weeks later, with entire cities and countries going into lockdown, Kaur found a new way to stay connected to her millions of followers. Last week, she hosted a live writing workshop on Instagram that encouraged people to tune in with nothing more than a notebook, a pencil and their thoughts. “In the end I’ll invite some of you to hop on live with me and share your pieces with the rest of us,” she wrote. This week, she announced another community initiative: an open mic night on Instagram Live. The date and time are TBD but Kaur is soliciting submissions until Friday, March 27 at 5pm EST. “First things first- we need performers!” she wrote. “So if you want to take the stage send me an email with your IG handle. a small bio. and the piece you’d like to perform to: writewithrupi@gmail.com. i will select the lineup and we can all have a cute night in with poetry. tea. and candles ♥️?”

this morning i thought: wouldn’t it be fun to host a community open mic night? open mics are where i first started performing and til this day i loveeee attending them cause they leave me feeling so inspired so i’m gunna host an open mic on IG live ? date and time haven’t been decided. first things first- we need performers! so if you want to take the stage send me an email with your IG handle. a small bio. and the piece you’d like to perform to: writewithrupi@gmail.com. i will select the lineup and we can all have a cute night in with poetry. tea. and candles ♥️?(deadline to submit is friday march 27 at 5pm EST new york time)

James Corden
Talk show host James Corden’s late night show The Late Late Show shut down production due to the coronavirus on March 15, but he’s returning to our screens next week with a “Homefest” special. Scheduled for March 30, the special episode is being filmed “in the spirit of bringing people together to keep people apart.” Corden will be filming the special in his garage in Los Angeles, and plans to bring on a slew of musical guests including Billie Eilish, BTS, Dua Lipa and John Legend via Zoom.

James Corden wants you to stay at home—and he's hosting a musical special with #BTS, Billie Ellish and more to encourage just that: https://t.co/q6Iv4ykMT4

Elton John
This weekend, Sir Elton John is hosting a concert from his living room in lieu of the cancelled iHeartRadio Music Awards. The hour-long concert, titled “Fox Presents the iHeart Living Room Concert for America,” will stream for free on Fox’s digital platforms, with viewers encouraged to donate to Feeding America and the First Responders Children’s Foundation. Besides Elton John himself, the concert will also feature performances from other musicians streaming live from their respective living rooms. Expect Mariah Carey, Alicia Keys, Billie Eilish and the Backstreet Boys to make an appearance. The show will air at 9pm EST on March 29, and be broadcast on iHeartMedia radio stations as well.

Patrick Stewart
Legendary stage and screen actor Sir Patrick Stewart did a one-off Shakespeare reading on his social media feeds over the weekend, and “delighted” by the response he received, he decided to turn it into a daily series. His “A Sonnet A Day” series is not only super soothing, but a true literary treat considering it’s coming from a person who won a Grammy in 1996 for Best Spoken Word Album. Catch his daily sonnets on Twitter and Instagram and share them with friends, grandparents and any other people you know with a taste for Shakespeare.

Global Citizen
Global Citizen’s #TogetherAtHome live music series has so far brought us performances from John Legend, Chris Martin, Jennifer Hudson, Hozier and other musical legends, all broadcasting live from their living rooms. The series delivers a half-dozen new performances each day, on the respective musicians’ own social media channels as well as on Global Citizen’s Instagram account. Over the weekend, real-life couple Shawn Mendes and Camila Cabello caused a stir when they did a joint performance from Miami, where are they currently self-isolating together.

You’ll be needing stitches after watching @ShawnMendes and @camila_cabello perform #TogetherAtHome ? Now’s your chance to step up for global health by taking action against #COVID19 ? globalcitizen.org/coronavirus

Images via Getty. Design by Kayleen Dicuangco.
Get the best of FASHION in your inbox Thanks for signing up!
The latest fashion, beauty and celeb news delivered right to your email #FASHIONforall Now, check your inbox to complete your subscription
We won’t ever use your email address for anything else
Want even more FASHION? Follow us on social media.