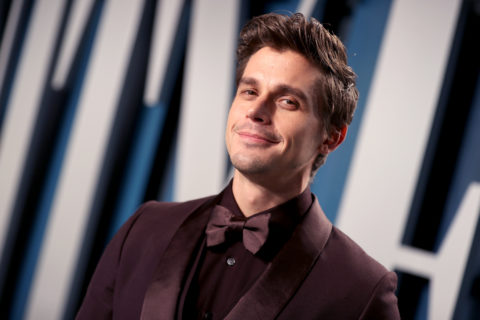 Day 1 involved a "Keep Calm-lette" so we know this is going to be good.

We’re only a few days into self-isolation but figuring out what to eat is already becoming a challenge, due to restaurants closing down (as they should!), grocery aisles being cleaned out, and just a few shelf-stable ingredients in our pantries to play around with. Well, Antoni Porowski is coming to the rescue from his own self-isolation hub in Texas, where he and the rest of the Fab Five were supposed to be filming the new season of Queer Eye but seem to all be practising social distancing at the moment.

On Monday, Porowski uploaded a cooking lesson on Instagram which became the first episode of his Quar Eye: Cooking Lessons in Quarantine series. For Day 1, he wanted to assemble a huevos rancheros (“because when you’re in Texas that’s what you do”) but discovered that most grocery shelves were empty. “I know that’s something that everybody’s experiencing,” he said, and pivoted to a slightly different meal instead: a “Keep Calm-lette” aka an omelette made in isolation, served with an avocado/black bean salsa put together from “whatever was left at the grocery store.”

EP#1: The Keep Calm-lette: An omelette made in isolation is still an omelette. Served w a black bean salsa made w whatever was left at the grocery store

On day 2 of his quarantine he delivered a new episode, cooking a dinner of zoodles with meat sauce. He initially wanted to make a tuna salad but as there was no canned tuna or romaine at the grocery store, he had to assemble a meal with whatever ingredients he was able to scrounge from the store (a skill we’ll all have to develop in the coming weeks). “Zoodles are a ridiculous word but a delicious thing to eat. A simple af meat sauce w loads of spinach make it a full meal,” he wrote on Instagram.

EP#2: Zoodles with Meat S.O.S ? ?: Zoodles are a ridiculous word but a delicious thing to eat. A simple af meat sauce w loads of spinach make it a full meal. Check my insta stories to see how you can help @feedingamerica get food to those in need right now including the elderly, families who are struggling and students.

While we all adjust to our new circumstances, at least we’re getting cooking guidance and inspiration from our favourite food guy, who as usual, serves up a side of wise words as well: “We’re stuck at home, but we might as well still be able to prepare good food, that’s good for us, and that makes us feel good. We need things that make us feel good, even in pandemics like these.”

Photo by Rich Fury/VF20/Getty Images for Vanity Fair
Get the best of FASHION in your inbox Thanks for signing up!
The latest fashion, beauty and celeb news delivered right to your email #FASHIONforall Now, check your inbox to complete your subscription
We won’t ever use your email address for anything else
Want even more FASHION? Follow us on social media.