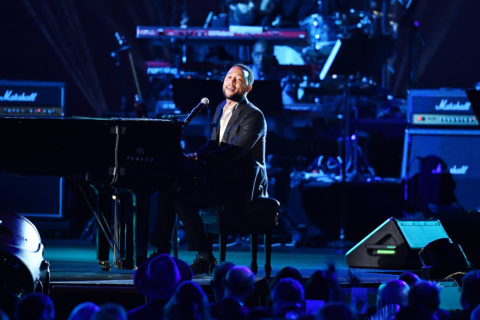 John Legend is Live-Streaming a Concert on Instagram Today

The singer was inspired by Chris Martin, who held a concert from his home yesterday with the hashtag #TogetherAtHome.

We may all be confined to our homes for the next few weeks to stop the spread of coronavirus, be we’re certainly not alone. As more and more people around the world take the decision to self-isolate, the bonds of community are being strengthened rather than severed. Innovative ideas to stay connected are popping up in cities worldwide, such as group yoga classes live-streamed over Instagram. Coldplay’s Chris Martin took it a step further by holding a 30-minute concert on Instagram yesterday, with the hashtag #TogetherAtHome.

My friend Chris Martin did a lovely little concert from home today. I'll be doing one tomorrow at 1pm Pacific time. See you soon. We'll try to get through this together! #TogetherAtHome https://t.co/YZ8Y1W8esc

Taking a cue from Martin, John Legend is doing a concert of his own today, at 1pm PST/4pm EST. “We’ll try to get through this together,” he tweeted, adding, “It’ll be on Instagram Live at @johnlegend. Requests will be accepted.” Mindy Kaling was one of the first to get her request in, tweeting: “Can he please play the office theme with lyrics he makes up?”

It'll be on Instagram Live at @johnlegend. Requests will be accepted. And let me know which other artists I should pass the torch to

As if you needed another reason to tune in, Legend’s wife, the endlessly hilarious Chrissy Teigen, will of course be there too. (Legend has already floated the idea of making the concert a “robe party.”)

Hopefully, another musician will pick up the torch next, and we’ll have ourselves a chain of concerts to look forward to each day or week in the midst of these very trying times. Jhene Aiko has already volunteered, and requests from Twitter users for subsequent performers in the #TogetherAtHome series include Ed Sheeran, Justin Bieber and of course, Beyonce.

Aside from this series, Canadian legend Neil Young has also promised fans a regular Fireside Sessions performance series where he’ll perform from home with his wife, actress Daryl Hannah, serving as the camera operator. “It will be a down-home production, a few songs, a little time together,” he wrote on the Neil Young Archives. Additionally, Death Cab for Cutie frontman Ben Gibbard will livestream performances from his home studio every day for the next few weeks. “I know you are all freaked out right now,” he wrote in a lengthy social media post. “I am, too. And while I’m proud that we’re all doing the necessary things at the moment to help flatten the curve, I know it has left us incredibly isolated.” To alleviate that feeling of isolation, he will be live-streaming on Youtube and Facebook at 4pm PST/7pm EST daily.

Tune into https://t.co/mGtxzmvl3A to see Ben livestream for the next few weeks at 4pm PST daily. pic.twitter.com/Llt2syGHvT

Photo by Amy Sussman/Getty Images
Get the best of FASHION in your inbox Thanks for signing up!
The latest fashion, beauty and celeb news delivered right to your email #FASHIONforall Now, check your inbox to complete your subscription
We won’t ever use your email address for anything else
Want even more FASHION? Follow us on social media.