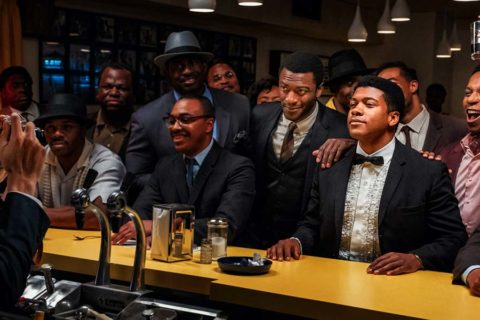 TIFF 2020: These Are the Up-and-Coming Canadian Actors to Know

From Eli Goree in One Night in Miami to Kiawentiio Tarbell in Beans, these are the actors everyone was talking about at TIFF 2020.

The 2020 Toronto International Film Festival wrapped this past weekend, and though it featured a reduced slate of 50 films (down from over 300 last year), there were still plenty of buzzy films to talk about. And starring in some of the most acclaimed titles of TIFF 2020 are several up-and-coming Canadian actors. Read on to learn more about the rising stars emerging from the festival this year. And get familiar with their faces—you’ll be seeing a lot of them in the future.

Playing Cassius Clay—later known as Muhammad Ali—in Regina King’s feature directorial debut One Night in Miami, Halifax-born Eli Goree is pure swagger and confidence. The actor previously appeared in the Jesse Owens biopic Race (starring another Canadian rising star, Stephan James) and currently has a recurring role on Riverdale, but it’s this film—in which Ali gathers with Sam Cooke, Malcolm X and Jim Brown to celebrate his World Heavyweight Championship win in Miami—that’s sure to propel Goree to stardom. His performance as Ali, it turns out, has been years in the making. He first began preparing to play the sports legend in the hopes of landing the lead role in an Ang Lee film that was subsequently shelved. But Goree, for whom it was a lifelong dream to play Ali, never stopped training. “I thought ‘I’m going to keep working on this because at some point there will be another opportunity to play Cassius and I want to be prepared,'” he tells us over the phone. That opportunity came soon enough, and Goree doubled down on his training even more, working with boxing instructors and dialect coaches to nail the rhythm and cadence of the American icon. “You can never fully emulate someone who was the best ever at what he did but you want to honour and respect it, and create a sense of authenticity so when people watch it they don’t get taken out of the story. It was a big undertaking and I really gave it my all.”

Director Tracey Deere was a young girl during the 1990 Oka Crisis when Quebec police faced off with Mohawk communities trying to protect their burial ground from the expansion of a neighbouring golf course. Her experiences during that chaotic time formed the basis of her debut feature film, Beans. 14-year-old Mohawk actress Kiawentiio Tarbell (whom viewers might recognize from her stint on Anne With An E) plays the lead character, whose life is turned upside down during the crisis. “It’s really crazy that this even happened, I don’t understand how people could have done that to anybody,” Tarbell, who had heard about the crisis growing up, says over the phone. “Hearing it from a personal perspective like Tracey’s, it’s a lot to take in. I was a little nervous at first. I knew there was a lot of trauma and a lot of things I had to do that were uncomfortable. But Tracey made sure I knew that it was going to be a safe space.” A keen songwriter, Tarbell also worked on a song throughout the process of filming, which eventually made its way to the film’s end credits. “The song is about overcoming difficult things. I wanted it to be empowering, because Beans as a character is really empowering and she’s a symbol of resistance.”

Born in Kawartha Lakes, Ont., Madeleine Sims-Fewer moved with her family to the UK when she was just two years old. As an adult, she returned to Canada to study filmmaking at Toronto’s York University. In 2015, she met fellow filmmaker Dusty Mancinelli at a TIFF Talent Lab, and the duo have since created three short films and one feature, Violation, which premiered at TIFF 2020. “We’re interested in characters who are complex and nuanced, and not black-and-white and one-sided,” she says over the phone. “There’s a line [a character] says in Violation: ‘everyone’s medium-shitty.’ And that’s really something that appeals to us.” Sexual assault is a common thread that runs through their experimental films, and helps the filmmakers process complicated emotions about their own experiences with abuse. For this film in particular, Sims-Fewer decided to cast herself in the lead role because she knew she could push herself to achieve what the character needed to portray on screen. “I knew that it was going to be incredibly emotionally and physically demanding, and I knew whoever played the role was going to live in a really difficult headspace for quite a long time.” Read our full interview with Sims-Fewer here.

The Winnipeg-born actress has been playing Brianna on The Handmaid’s Tale since Season 1 and most recently appeared with Schitt’s Creek’s Noah Reid in The Archivists, a dystopian short film in which society has devolved and art has been made illegal. The film, which premiered at TIFF last week, isn’t a cautionary tale but “does make us think about governing and what it’s capable of in terms of limiting our access to the arts.” As a biracial woman, Watson often found herself receiving audition calls for stereotypical characters like ‘Shaniqua from the hood’ and decided that in order to appear in projects that were more fleshed out and well-rounded, she’d just have to write them herself. So in addition to acting (on stage and screen), Watson also writes her own music and theatre productions. Read our full interview with the actress here.

the grown woman of your bravest dreams image description: brown skinned beauty with a tight rolled bayang in a floral dress

18-year-old Cree actor Joel Oulette had two projects premiering at TIFF this year: Monkey Beach, a supernatural film based on a novel by Eden Robinson, and Trickster, a CBC series also based on a Robinson story. Directed by Michelle Latimer, the series follows an Indigenous teen, played by Oulette, struggling to support his dysfunctional family amid myth, magic and monsters. “Not a lot of Native kids get represented,” said Oulette, about the need for more Indigenous representation on screen. “They don’t really see the potential they could really have. I feel like being young and being on a TV show like this, it can really open their minds up.” Trickster begins airing on CBC on October 7.

image courtesy tiff
Get the best of FASHION in your inbox Thanks for signing up!
The latest fashion, beauty and celeb news delivered right to your email #FASHIONforall Now, check your inbox to complete your subscription
We won’t ever use your email address for anything else
Want even more FASHION? Follow us on social media.