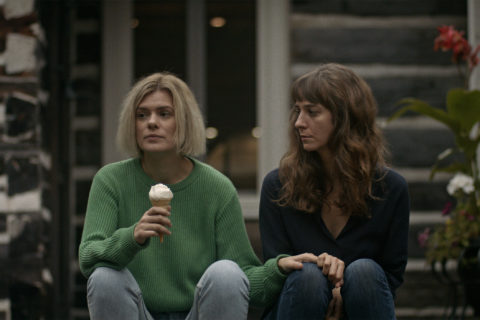 image courtesy one plus one
Celebrity

Perhaps if I had watched some of the short films by Canadian filmmaking duo Madeleine Sims-Fewer and Dusty Mancinelli before the TIFF premiere of their debut feature Violation, I would have been a bit more prepared for what unfolded on screen.

Like their earlier works, which handle themes of sexual assault and violence with a delicate ambiguity, this film revolves around a violation of trust. But seeing as this is a feature-length project as opposed to a 10- or 20-minute short, Violation gives the filmmakers room to explore what comes next, after that betrayal. In doing so, their film both adds to the canon of rape revenge films that form a distinct subset of the horror genre, and also subverts it. (Fair warning: this will be a tough film to watch unless your threshold for gruesome violence is very, very high.)

The film centres around two estranged sisters who reunite for a weekend, husbands in tow, at a secluded cabin. Sims-Fewer takes on the role of both co-director and lead, saying that she knew she could push herself to the emotional and physical extremes required of her character Miriam. Without giving too much away, Miriam is sexually assaulted by her brother-in-law Dylan (played with a chilling complexity by Jesse LaVercombe), and decides to exact revenge in a truly excruciating, bloody manner. The revenge sequence is played out on screen in grim, methodical detail; a far cry from the almost-superhero-like ease with which revenge has been depicted in other films.

“For us it’s really an anti-revenge film,” says Sims-Fewer over the phone from her home in Toronto. “Revenge is not the answer. What was interesting and important to us was asking ‘how does the act of revenge end up destroying your own sense of self and morality?’ It’s important for people to think about and talk about how you overcome trauma in a way that is actually useful and healthy, and doesn’t destroy you. Because it doesn’t need to. I think so often revenge films support the idea that trauma destroys you and the only way to overcome it is through a similar act of violence. But those painstaking things that [Miriam] has to do are ingraining trauma further in her rather than taking it away.”

Both Sims-Fewer and her creative partner Mancinelli—who met at the TIFF Talent Lab in 2015—are victims of sexual abuse, and their films serve as a way for them to process the emotions surrounding those acts of trauma.

“The film’s very personal for me and Dusty. One thing that we talked about early on in the writing process was our own revenge fantasies. When someone close to you has wronged you in that way, I think a lot of people think about the revenge they would get, or what would bring them peace. I think Miriam’s methodical planning is that fantasy. And when she gets into the reality, she’s not prepared; she’s not hardened enough.”

What makes this film stand out from other revenge films—a subgenre Sims-Fewer grew up watching and is a big fan of—is how the audience is not encouraged to instinctively root for Miriam. Her motivations are murky, and her commitment to the gruesome act of revenge stomach-churning. But this is precisely what the filmmakers wanted to communicate to their viewers.

“There’s something really interesting to me in characters whose motivations are not always good, and not always apparent. Some of my favourite characters in movies are very complicated, like Harvey Keitel’s character in The Bad Lieutenant and Travis Bickell in Taxi Driver. Walter White in Breaking Bad has one of the most beautiful and complex and interesting character arcs. I haven’t seen a lot of films with female characters who have similar complexity in their flaws. And so it was really interesting to both of us to create this character who is maybe blinded to the true nature of her motivations.”

In examining an act of sexual violence inflicted by a person who is known to the victim, the film also deals with thorny issues of consent, gaslighting and manipulation. It also consciously avoids the exploitative tropes of the rape-revenge subgenre, which invariably puts the focus on the female body being violated instead of the male body responsible for the act of violation.

“The person who is inflicting this trauma, his body is a weapon,” says Sims-Fewer. “So we wanted to show the naked male body from Miriam’s perspective and how it’s threatening to her… but also, she’s taking the power back. There’s something unusual in watching a man in a vulnerable naked position and a fully clothed woman in a scene.”

The film may flip power structures and subvert the male gaze but it’s far from a cathartic or redemptive story. It’s harrowing and disorienting, and it forces viewers to confront multiple different forms of trauma—some self-inflicted and invisible, others unflinchingly sadistic and visceral.

“I definitely knew it was going to be a hard, challenging film for people but that’s the reaction we’re hoping for—that it puts you on edge and makes you feel uncomfortable.”

image courtesy one plus one
Trends, beauty secrets, culture & more
Only $1 an issue #FASHIONforall
Subscribe now!