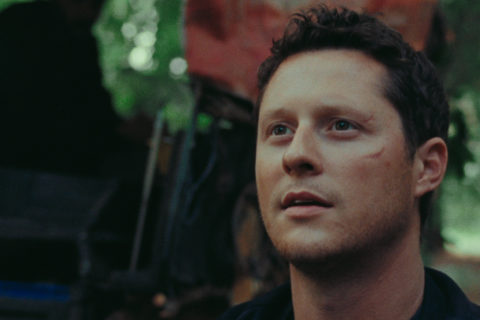 His new short film, The Archivists, is now available to view via TIFF's Digital Cinema platform.

Schitt’s Creek is one of the most-watched shows during lockdown and Noah Reid, who played Patrick Brewer on the beloved series, totally gets why.

“I think during lockdown it’s great to have something that makes you laugh, warms your heart and presents some hope and some cheer.”

This ability of art to serve as a balm during troubled times is at the root of The Archivists, a short film starring Reid that premiered at the Toronto Film Festival this year. Set in a dystopian future where society has collapsed and art is now illegal on account of being considered “decadent,” Reid and co-stars Bahia Watson and Maxwell McCabe-Lokos play de facto archivists on a quest to recover music wherever it may still be found.

“A film like The Archivists highlights that in the darkest times, cultural output can really give you something that you need,” Reid says over the phone. “When the world is falling apart, at least you can look at something, somewhere, being full of life.”

In the 13-minute short film, which is available to rent on TIFF’s Digital Cinema platform, the three archivists come across an abandoned home and decide to investigate. Inside, they discover dust-covered vinyl records and an old gramophone. They pick up an album at random— “The Age of Consent” —and try to recreate a song off the degraded record using whatever instruments they find in the house.

The song, chosen by the film’s director Igor Drljaca, is Smalltown Boy, a 1984 hit by British synth-pop band Bronski Beat. Given that all the members of the group were openly gay and often sang about LGBTQ issues, the choice of this particular band adds another subtle political layer to the film.

“I didn’t know the song,” says Reid. “But it’s really interesting to look at when that song came out, and what it meant. It was a bit of a protest and a survival song. The archivists are intuiting some of that and putting it through their own lens of the world they’re living in. They’re finding ways to connect with artists from the past and with everyday life and human struggle.”

As a musician himself, the idea of living in a world where music and art is suddenly illegal is a troubling one for Reid, especially considering the ways in which his own art has impacted the world over the past few years. Earlier this summer, he released a new album Gemini, hoping that people would find value and solace in it during this troubling time. “The record’s sort of about love and connection and doubt and isolation so it’s thematically on point with what most of us are dealing with. And I think those kinds of contributions can be useful in times like this.”

And of course, over the course of the six seasons of Schitt’s Creek, members of the cast have routinely received letters and messages on social media from fans (particularly from the LGBTQ community) about the effect the show has had on their own personal journey, or helped improve their relationship with family members. The David and Patrick relationship, in particular, has been a source of joy and hope to millions.

“I don’t think we could have imagined that that relationship could have been so impactful to people,” Reid says. “The grand romantic gestures they make towards each other have found their ways into people’s lives and I don’t think you could ask for a better legacy to be a part of.”

The show is being recognized for its sixth and final season with a whopping 15 Emmy nominations. The virtual 2020 Emmys ceremony will take place this Sunday, September 20, and Reid plans to get together with a few members of the cast for a small, socially-distanced viewing party.

“A few of us are going to get together and dress up and pretend like it’s a big fancy thing. You’ve got to pick your moments nowadays to feel celebratory and this feels like a good one.”

The Archivists is available to rent on TIFF’s Digital Cinema platform for $19 until September 19. From September 24 until October 7, it will be available online as part of the 2020 Vancouver International Film Festival.

image courtesy of Timelapse Pictures and Big & Quiet Pictures
Get the best of FASHION in your inbox Thanks for signing up!
The latest fashion, beauty and celeb news delivered right to your email #FASHIONforall Now, check your inbox to complete your subscription
We won’t ever use your email address for anything else
Want even more FASHION? Follow us on social media.