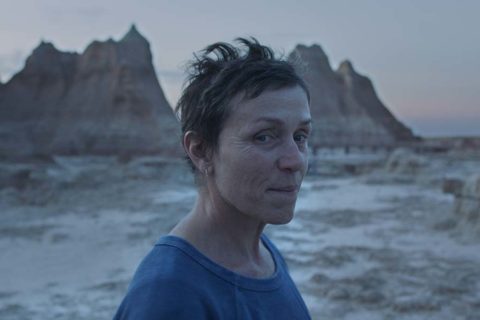 TIFF 2020 Recap: The Films Everyone Was Talking About This Year

Nomadland, One Night in Miami, No Ordinary Man and more.

Although much of the world shut down this year—live events were cancelled, awards ceremonies were moved online and concerts began taking place in living rooms—the Toronto International Film Festival decided to soldier on with a mix of virtual and IRL movie screenings. TIFF 2020 might have presented a reduced slate of 50 films (down from the usual 200+), but its focus on diversity and inclusivity didn’t wane.

No stars flew into the city for this year’s festival of course, but they did seem to be missing the communal experience and the electric energy that takes over the city every September. “You literally crash into people in hotel lobbies and lines waiting to get into a conference,” said Kate Winslet at a virtual TIFF press conference. “I wish that we were all in the same space and could hug and connect. It’s sad not to get that bit of TIFF, because TIFF really is that—it is about closeness, and connecting to people through their films and artistry.”

While there were no crowds lining the streets outside theatres this year, waiting to catch a glimpse of their favourite celebrities, nor was there movie chatter at every restaurant and bar on King Street, there were many conversations taking place online, with actors, audiences, filmmakers and journalists weighing in on social media, Zoom panels and Instagram Lives. Here are the films and performances that had everyone talking at TIFF 2020. Be prepared to hear about them all through awards season.

Nomadland
Like Chloe Zhao’s earlier works, Nomadland is both intimate and expansive, following a small community of American baby boomers who have traded in their homes and pitiful pensions for a life on the road. While the cast is mostly filled with the real-life “nomads” who populate the book this film is based on, lead actor Frances McDormand and her co-star David Strathairn are both likely to earn Oscar nods. The film won the prestigious Golden Lion award at the recently concluded Venice Film Festival, a prize that usually bodes well for a film’s performance on the awards circuit.

One Night in Miami
Actress Regina King’s feature directorial debut is based on a play that imagines the conversations that may have taken place between four American icons (and real-life friends) Malcolm X, Muhammad Ali, Sam Cooke and Jim Brown on one night in Miami in 1964. These four men might be legends but the film shows them as complicated human beings trying to figure out their place in the culture, and how to channel their power and platform into meaningful change. There’s already early buzz for King who, if nominated for a Best Director Oscar, would make history as the first Black woman to receive that honour. Kingsley Ben-Adir is sure to earn a nod for the righteous fury with which he captures Malcolm X, and co-stars Leslie Odom Jr, Eli Goree and Aldis Hodge are likely to get awards recognition as well.

Shiva Baby
Emerging Toronto filmmaker Emma Seligman’s debut feature film received a great response for its darkly comedic depiction of a young, queer, Jewish woman struggling to hold it together over the course of a chaotic shiva. Overeager relatives, well-meaning but OTT parents, an ex-girlfriend and a current sugar daddy all convene to make for an excruciating but hilarious afternoon.

No Ordinary Man
Co-directed by Canadian filmmakers Chase Joynt and Aisling Chin-Yee, this documentary looks at the life and legacy of jazz musician and trans icon Billy Tipton, whose trans identity was revealed to the world after his death in 1989. Although misgendered and misunderstood at the time, Tipton went on to have a profound impact on the trans community. This profound and moving film explores the musician’s lasting legacy through the perspectives of a series of trans actors, writers and thinkers.

Beans
Weaving a coming-of-age story with news footage of the 1990 Oka Crisis, this compelling film is rooted in director Tracey Deer’s own experiences as a young Mohawk girl who lived through the crisis. Told from the point of a view of a 12-year-old girl, nicknamed Beans, the film shows both the personal and political reverberations of this event on the Mohawk community in Quebec. Both Kiawentiio Tarbell, the lead actress, and Rainbow Dickerson, who plays her mother, deliver standout performances.

Inconvenient Indian
Michelle Latimer’s experimental documentary explores not just the unfair ways in which Indigenous people have been portrayed in the media but also the efforts of the current generation of Indigenous folk to reclaim their identity. Based on a book by Thomas King, the film pulses with life thanks to striking visual imagery, bold narrative choices and an energetic soundtrack.

Ammonite
This period drama centres around the relationship between 19th century palaeontologist Mary Anning (played by Kate Winslet) and geologist Charlotte Murchison (played by Saoirse Ronan). Although the film, directed by Francis Lee, has received mixed reviews, the performances by both its leads have been acclaimed as powerful and award-worthy.

Pieces of a Woman
This film by Hungarian director Kornél Mundruczó portrays the trauma of losing a child through the lens of a young Boston couple who suffer a tragic home birth. Vanessa Kirby and Shia LaBeouf, who play the anguished parents, earned rave reviews for their work in the film, which also stars Ellen Burstyn, Succession’s Sarah Snook, and Benny Safdie.

The Father
Sir Anthony Hopkins and Olivia Colman are receiving early awards buzz for their work in The Father, a drama in which they play father and daughter. Amid plans to move to a different city, Colman’s character must figure out the best way to care for her aging father, who suffers from dementia. Based on a play by French writer Florian Zeller, the film expertly brings to screen the bewilderment and confusion of a mind that’s beginning to lose touch with reality.

image courtesy tiff
Get the best of FASHION in your inbox Thanks for signing up!
The latest fashion, beauty and celeb news delivered right to your email #FASHIONforall Now, check your inbox to complete your subscription
We won’t ever use your email address for anything else
Want even more FASHION? Follow us on social media.