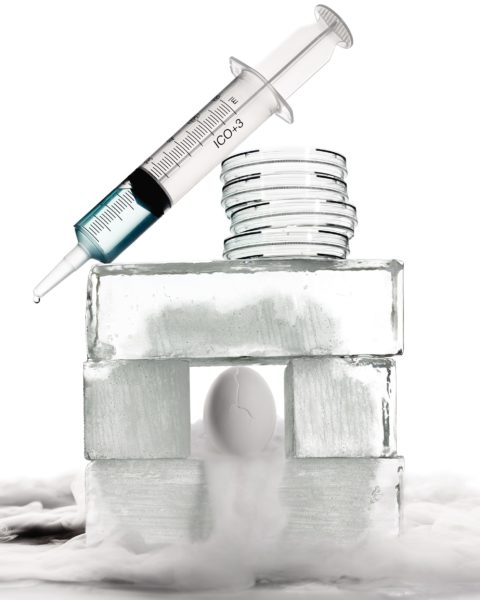 Can You Really Fight Infertility With Egg Freezing?

When a woman is 44, her chances of having a baby jump from 21.9 per cent for natural conception to 51.6 per cent if she uses eggs that she froze when she was 37.

The first time Stephanie* heard about egg freezing was in one of her last law school lectures. Her professor—who she always thought was a little wacky—surprised the class when she pronounced: “Freeze your eggs! Take what’s left of your loans and just do it now.” Stephanie was appalled. Was this really the most important piece of advice the professor had to pass on to her students?

A few years later, Stephanie started to hear stories from older female lawyers who were struggling to have children. Having babies wasn’t on their to-do list when they were in their early 30s, and now that they were ready, things weren’t going as planned. It wasn’t on Stephanie’s list either, but after speaking with these colleagues, she began to consider her options.

Stephanie broached the subject of egg freezing during a visit to her doctor for a respiratory infection. “Do you think I should go off the pill?” she asked. “I’ve been on it for more than a decade, and I’m thinking about freezing my eggs.” He gave her the usual “There’s no good time to have a kid” doctor’s speech but also advised her that it would be better to freeze her eggs if she wasn’t planning to have a child soon. “He’s around my age, so he gets our generation,” she explains. “My boyfriend also supported me. He was like, ‘It’s your body.’” So, at age 33, she did it.

Based on the latest data, Stephanie was the optimal age for the procedure. In 2015, researchers at the University of North Carolina at Chapel Hill published a report in the journal Fertility and Sterility that analyzed the best time for a woman to freeze her eggs if she was planning to get pregnant in the next three, five or seven years. They factored in the probability of her eggs being viable as well as how much it would cost.

They determined that the best age in terms of egg viability is between 31 and 33. But they also noted that a younger woman might end up wasting her money because she has more time and is more likely to get pregnant naturally. Therefore the best age—in terms of the eggs being viable and cost-efficiency—is 37. When a woman is 44, her chances of having a baby jump from 21.9 per cent for natural conception to 51.6 per cent if she uses eggs that she froze when she was 37. Thirty-seven seems to be the sweet spot, but it’s a small window: Successful birth rates dropped to the study’s lowest point (26.2 per cent) after age 40.

So how many women are doing this? There isn’t any reliable Canadian data, but according to the Society for Assisted Reproductive Technology, the number of women who chose to freeze their eggs in the United States grew by more than eight times between 2009 and 2013: from 475 to 3,938.

Dr. Sonya Kashyap, medical director of Genesis Fertility Centre in Vancouver, says that two of the main reasons women opt for this procedure are (1) they’re focused on their career and (2) they don’t have a partner and don’t want to have a child on their own. She adds that egg freezing is the closest we’ve come to closing “the fertility gender gap.” Women—unlike men, who produce new sperm throughout their lives—have a limited number of eggs available during their lifetime, and this number (and their quality) decreases with age.

Although Stephanie didn’t want her name published, some celebrities have spoken openly about having the procedure. In 2011, Maria Menounos revealed that she had attempted to freeze her eggs so she could focus on her work but the process was ultimately unsuccessful. (Since 2016, she has been sharing her continued struggles to get pregnant.) In 2012, Kim Kardashian announced similar news on Keeping Up with the Kardashians, and in 2013, Sofía Vergara went public with her decision to freeze her eggs in the event that she and her then fiancé, Nicholas Loeb, might wish to have children. “We just wanted to plan ahead,” Vergara, then 40, told ABC News about the possibility of her having more children, adding that at 40 “nothing happens that naturally.” (In 2016, Loeb sued her for custody of their two frozen fertilized eggs.) In March 2017, The Bachelorette star Kaitlyn Bristowe announced on social media that she was doing it. “I’m taking control of my future,” she tweeted. “For a woman, there’s always pressure to have babies, and this puts my mind at ease for when I’m ready.”

When a woman is 44, her chances of having a baby jump from 21.9 per cent for natural conception to 51.6 per cent if she uses eggs that she froze when she was 37.

The subject of egg freezing is also showing up in television storylines. In The Mindy Project, Mindy Kaling’s character opens a clinic called Later Baby and makes it her team’s mission to tour colleges to educate young women about the benefits of freezing their eggs. “Let’s be honest, guys, most men are complete garbage,” her character tells some NYU students. “OK, listen, listen…. When I was your age, I thought I was gonna be married by the time I was 25. But it took a lot longer than that. And, unfortunately, your body does not care if you are dating the wrong guy or [if] the guy you’re with is also sleeping with the rest of your dorm. Your body and your eggs just keep getting older, which is why freezing [your eggs] is actually a pretty smart idea, because it gives you a little more time so that you can try to find that one diamond in the crap heap of American men. Because even if you find the right guy, you’re gonna want a little extra time.”

But does the procedure really buy women extra time? Since the early 1980s, it has been possible for women to freeze their eggs, but the survival rate for thawed eggs used to be low. The egg is the largest cell in the human body, and up to 95 per cent of it is water. The problem with the old process was that when an egg was slowly frozen, it was more likely to form ice crystals. When it was later thawed, those crystals could crack and potentially damage its DNA.

In 2015, the Canadian Fertility and Andrology Society removed the “experimental” label from vitrification—a flash-freezing method—bringing the more successful egg freezing process into the mainstream. Only 61 per cent of eggs preserved via the slow method were viable when they were thawed, versus 90 to 97 per cent using the flash-freezing method. According to the American Society for Reproductive Medicine, of the flash-frozen eggs from women younger than 30, between 71 and 79 per cent can be fertilized, 17 to 41 per cent will be successfully implanted and 4.5 to 12 per cent will result in a live birth.

According to the American Society for Reproductive Medicine, of the flash-frozen eggs from women younger than 30, between 71 and 79 per cent can be fertilized, 17 to 41 per cent will be successfully implanted and 4.5 to 12 per cent will result in a live birth.

So while egg freezing may not be the magic bullet, Kashyap says it’s important that women know they have the option. “It makes them feel empowered,” she says. “Egg freezing gives women an option so they don’t feel pressured to have kids right away. They can take their time to find a suitable partner and feel ready. It’s not perfect, but it’s better than it was before.”

(*Name has been changed.)