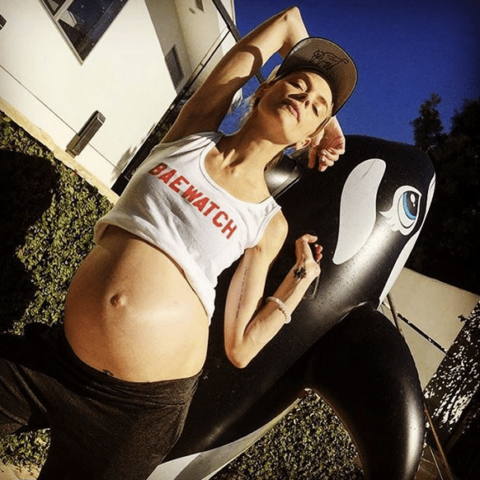 Are Celebrities Perpetuating the Myth of a Perfect Pregnancy?

If there’s anything the press loves more than celebrities, it’s pregnant celebrities—what they’re eating, wearing, how much weight they’ve gained and how quickly they lose the baby weight. Celebrities usually respond in kind with happy photo shoots for People Magazine or by sharing their workouts and diets. What is often absent, however, is honest conversation about the difficulties of pregnancy and conception—topics that few celebrities speak candidly about.

The number of women having children into their 40s has been rising steadily for the past five years, a trend exemplified by the pregnancies of actresses like Halle Berry (she had her first child at 41 and second at 46), Eva Mendes (41), Salma Hayek (41) and Gwen Stefani (45)—none of whom have mentioned fertility treatments or a struggle to get pregnant. Berry referred to her pregnancy as “the biggest surprise of my life!” and told CNN she felt “fantastic.” Salma Hayek told Oprah she feels her 40s were the “best time” to get pregnant. “I really feel for those mothers who have the babies really young,” she said. “ [At 41] you’ve done so many other things in your life.”

Undoubtedly, many young women would agree with Hayek that a later pregnancy can benefit their careers—women occupy about 55% of the global workforce and when they’re at their peak fertility in their 20s, they’re also usually at the peak of their early careers and unwilling to take the often unpaid time off to have a baby.

Plus, with the seemingly abundant fertility resources at our fingertips— hormone injections, IUI (intrauterine insemination), IVF (in vitro fertilization), egg donors—why do it any sooner than we have to? Even Apple and Facebook are offering to pay to freeze their female employee’s eggs. We should all be like these happy, healthy celebrity mothers, right?

Wrong. Statistically, many of us can’t. Women like Hayek, Berry and Mendes are the exception, not the rule. Per the American Society for Reproductive Medicine, fertility declines dramatically in a woman’s 30s. “Each month that she tries, a healthy, fertile 30-year-old woman has a 20% chance of getting pregnant,” reports their guide for patients entitled Age and Fertility. “By age 40, a woman’s chance is less than 5% per cycle.”

And those fertility treatments? They don’t always work and they’re expensive. For women over 40, IUI and IVF are usually less than 5% and 20% effective per cycle, respectively. IUI costs around $1,000 per session and IVF can go up to $15,000. Hormone injections range from $100 to $5,000. Freezing your eggs? It costs around $10,000 to undergo an egg-freezing cycle and usually $500 a year to keep them frozen. Plus, freezing your eggs is an entirely new science—only about 2,000 babies have been born from frozen eggs to date.

Pregnancy is rarely glamorous and easy. What women need to glean from these facts and figures isn’t that they need to have children right away—or ever—but that they need to educate themselves about their options and, moreover, not feel alone if they do have problems conceiving.

On the flip side, there are some celebrities who have been honest about their fertility problems. Women like Kim Kardashian, Jamie King and Beyoncé have spoken out about how difficult it was for them to get pregnant. And the discussion shouldn’t be limited to women, as it affects male partners, too—Mark Zuckerberg has led a great example by speaking publicly about his wife’s miscarriages.

There is clearly a problem with the way our society perceives pregnancy and we can’t continue to keep quiet. Instead, we need to embrace open dialogue about its difficulties, talking about the the ups and the downs. Like King said, “It’s so taboo and it’s not sexy. But welcome to the real world.”