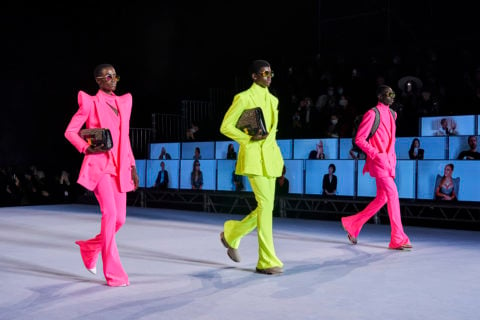 From dolls to films and just about everything in between...

It’s been a weird old year, with just about everything we took for granted as being normal being thrown out the window on account of the COVID-19 pandemic. It’s no secret that the fashion industry felt the impacts of the pandemic in a big way: from retail store closures to fashion week cancellations and a change in the tide of public opinion regarding the traditional fashion schedule, a lot of big issues were brought to the fore. Whilst the Resort and couture shows were cancelled, New York, London, Milan and Paris pressed ahead with fashion week in September – but not as we’ve come to know it. Some brands hosted in-person shows with audiences, others held shows without guests, and some took the opportunity to get a little creative in the virtual realm. Here, we recap nine designers who took virtual runway shows to new heights during the SS21 season:

Leave it to Jeremy Scott to create a fun fashion moment. The designer – who recently collaborated with Hudson’s Bay on a collection featuring its iconic stripes – created a full collection of doll-size garments which were showcased on a runway by marionette dolls. What’s more, the designer also had dolls created in the likeness of his regular front row attendees, including Anna Wintour and Hamish Bowles, as well as a version of himself. Of the concept, Scott said in a release that it was “a Moschino wink-and-nod to the fact that in order to begin anew, you have to start small.”

Watch the show below:

Back in July, J.W. Anderson presented his menswear collection for Spring 2021 on a line-up of paper dolls, invoking a nostalgia for our childhood days whilst simultaneously serving up a fashion fantasy. The pieces were adorned with patterns and florals, and silhouettes were fluid and fanciful. If only the paper dolls we grew up playing with looked like this…

Watch the presentation below (it starts at 2:00):

The Prada S/S21 womenswear show was one of the most hotly anticipated on the Milan Fashion Week schedule as it marked the debut of Raf Simons, alongside Miuccia Prada, for the house. And although there was no physical show, the brand delivered one of the best virtual runway presentations to date. As noted in our earlier show review,  tight, lingering shots revealed key details on clothing and greater detail on accessories, resulting in a collection reveal that – although digital – felt incredibly personal to the viewer. Plus, the addition of a Q&A with Raf and Miuccia at the end of the presentation, answering questions posed by fans from across the world, added an extra personal touch to an already very polished offering.

If anyone feared a video presentation would bore viewers, Collina Strada proved them wrong. Designer Hillary Taymour presented an upbeat video bursting with colour and sound. An inclusive array of models sported the brand’s newest pieces on hallucinogenic backdrops that cleverly added to the spirit of the clothes and overall vibe of the collection, rather than detracting attention from them. If you’re in a need of a Thursday afternoon pick-me-up, this will certainly do it:

Cool-girl fashion brand Khaite delivered the first augmented reality-infused presentation, allowing “guests” to view the new season items by scanning a QR code in a special book sent to their houses and having the items appear as 3D renderings on their phones as if they were physically present on their coffee table or desk. If you weren’t one of the lucky 100, not to worry, you can use your phone to recreate the experience via the brand’s website.

Olivier Rousteing once again delivered a major social media moment for Balmain as he unveiled his newest designs for the SS21 season. Given that many of his regular front row favourites couldn’t attend the shows in-person in Paris this season, Rousteing instead had three rows of giant TV screens set up the length of the runway to allow them to catch all of the action. Anna Wintour, Kris Jenner, Cindy Crawford and Cara Delevingne were amongst the familiar faces spotted on the screens.

Demna Gvasalia presented a fashion film for S/S21 with a Canadian influence. The new season collection was presented to the sound of a cover of Montreal-born Corey Hart’s 1984 hit I Wear My Sunglasses at Night. The cover was actually the work of Gvasalia’s husband Loïk Gomez, more commonly known as BFRND. Catch the moody clip on the brand’s website.

Jonathan Anderson thought of yet another clever way to present his spring/summer designs to press – by sending them wallpaper and life-size posters of the collection so they could quiet literally surround themselves with the collection.  According to Business of Fashion, the weighty box also had a scented disc inside, as well as sheet music, ensuring almost all senses were engaged in the offering.

LOEWE SS21 Show-on-the-Wall A set of different elements to be individually assembled by the recipient freezes the fashion content on a wall, in real size. The Show-on-the-Wall is a sum of different actions, all actively carried out by the recipient, which bring the spectator closer to the clothing. Posters featuring the looks and accessories arrive in an oversized artist’s portfolio, one of its faces screenprinted with an image by Steven Meisel, previously published by Vogue Italia in 1999. Accompanied by a series of tools including a canvas tool bag, a roll of wallpaper designed by artist Anthea Hamilton, a roll of wallpaper borders depicting all the looks from the collection, wallpaper glue, a brush, scissors, a ceramic disc infused with Beetroot scent and a catalogue raisonné. "The Show-on-the-Wall is derived from the idea that the SS21 Women’s collection was created remotely and rethinks how we contextualize fashion in this moment. While we are in a situation where travel is restricted we invite the viewer to interact and be creative." – Jonathan Anderson, creative director Creative direction by @Jonathan.Anderson and @MMparisdotcom Photography @Atome #LOEWE #LOEWESS21

We’re all counting down the days until 2021 begins, but Thom Browne took things one step further by placing his SS21 collection in 2132. The designer created a fictional Olympic Games-type event, called the Lunar Games, hosted by Canadian model Grace Mahary. Models – some of whom are actual Olympians – strutted up and down the steps of the stadium in the Dan Levy-loved designer’s newest wares in a presentation that provided us all with the escape we so badly need.