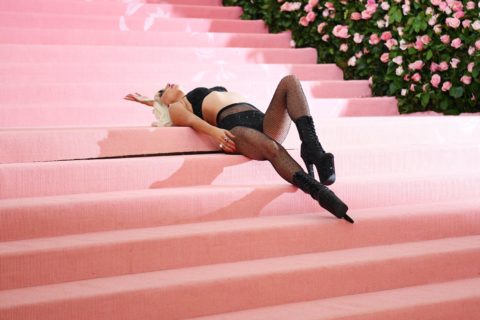 We ranked the most notable outfits of the evening on a scale of American Gothic (not camp) to Pink Flamingos (extremely camp).

Last night’s Met Gala kicked off with Lady Gaga arriving in shocking Schiaparelli-pink cape by Brandon Maxwell, which she removed to reveal a black gown, then another pink one, before finally stripping down to her underwear and crumpling onto the pink carpet like a defeated Judy Garland. But besides this flamboyant display, how camp was the Met Gala, exactly?

On a scale of American Gothic (not camp) to Pink Flamingos (extremely camp) we’d wager it ranked about a Dusty Springfield, that is, it achieved a medium-high level of camp. (While it may seem a tad out of character for the fashion world to embrace a sensibility that is defined by bad taste,  embrace it they did.

We ranked some notable Met Gala attendees on how they measure up to our own (very stringent!) camp criteria.

Lady Gaga is an incredibly talented performer, sure, but I kind of feel like she has me by a chokehold here, daring me to declare her anything other than camp after four outfit changes. We get it Gaga! You’re camp! Trying very hard is camp but there’s a sort of earnestness to Gaga’s desire to adhere to the theme that isn’t quite camp. Still, I’ll give it to her. Did you hear that? You can loosen your grip on my neck now, I think I’m starting to get rope burn.

This man understands camp on a deep, deep level. Porter arrived at the Met Gala dripping in custom gold Cleopatra-inspired look by The Blonds carried by six shirtless attendants. Subsequently, the attendants lowered him off the dais and Porter unfurled his cape to reveal a wingspan of Albatross-like proportions. To understand the true meaning of camp, we need look no further than this man.

Williams’ floral, sprouting dress by Versace initially strikes me as a bit too ‘nature-y’ to be camp, but the Off-White Nike sneakers put the outfit over the edge. In her essay on camp in the May issue of FASHION, Tatum Dooley writes “Virgil Abloh’s penchant for quotation marks could be seen as the ultimate example of contemporary camp.” Go off, Serena.

Don’t ask me why, but ruffles are camp. (Okay fine, ask me, I’ve already written a whole story about it.) Ruffles were one of the major themes of the evening, worn in heaping amounts by Doutzen Kroes, Lily Collins et al., but Laverne wore them best. Full camp marks awarded here.

The aeronautic shoulders of Lyonne’s jumpsuit are a clear reference to queer icon Klaus Nomi, which affords her some serious camp points. (Plus, she acted on Pee-Wee’s Playhouse, one of the most camp tv shows of all time.) This look is bold, strange, and very gay. Do you hear that? It’s the camp alarm sounding off.

One of my many hopes for the Met Gala was that somebody would arrive wearing a train of Princess Diana proportions, and Cardi B did not disappoint. Though honorable mentions go out to Gwen Stefani, Rachel Brosnahan and Sophie Hunter for attempting the train, it was Cardi’s Bi’s distended Thom Browne dress that truly achieved the excessive exaggeration native to camp. Cardi looked a little bit like vampire Aaliyah in Queen of the Damned mixed with Pope Benedict XVI. Her train required three separate fluffers. If that’s not camp then I do not know what is.

Brutally un-camp. Cyrus’s status as a former Disney star should help her coast by on merit alone, but this Saint Laurent look is simply not camp. It would be perfect if she were, say, attending a Studio 54-themed party, but this is the Met Gala! Just because something has sequins doesn’t make it camp. Plus, major points docked off for having bangs.

So, so, so, so camp. It perhaps cannot be overstated how camp Celine Dion as an entity  — and by extension, her Met Gala outfit — is. Dion’s appeal as a performer is based on her painfully earnest delivery of ballads like “My Heart Will Go On”  combined with flamboyant showmanship and a penchant for pizzazz. In this silver Oscar de la Renta jumpsuit bedecked with fringe and a feathered headdress, Celine gets extra camp points. According to Dion, the outfit was partially inspired by “the glitzy costumes of the Ziegfield follies.”

A term that often gets thrown around when trying to define camp is ‘trashy.’ Bieber’s faux-thong backless gown by Alexander Wang was definitely that. The tawdry detail reminds of being an awkward middle schooler in the early 2000s when it was cool to wear low-rise jeans with a hiked-up thong. Intentionally exposing a whale-tail? Definitely camp.

Bizarre, yes, but definitely camp. Dunham’s Christopher Kane dress from his F/W 2019 collection inspired by sexual fetishes completely, unexpectedly nails the theme. Camp is all about reveling in one’s own freaky filth and what better way to articulate this than by caping for a semi-obscure sexual fetish? Good job, Dunham. This look is totally weird, very extra and undeniably camp.

Kloss waltzed onto the red carpet looking the golden ticket from Willy Wonka and the Chocolate Factory in a Dapper Dan x Gucci dress — and not in a good way. This outfit reads as if she did the cursory reading on camp, then decided to ignore everything in favour of looking normatively hot. This outfit is distinctly not camp.

Wearing a shimmery salmon suit by Christian Siriano, Ryan Murphy appeared to be emerging out of a shell like Boticelli’s Venus. Mimicking a famous painting IRL? Yep, it’s camp.

Murdoch arrived in an outfit the looked like the ocean floor, all brain coral and undulating sea anemones. Though I am not in the business of awarding camp points to anyone less than six degrees of separation away from human axis of evil Rupert Murdoch, I must reluctantly accept that Murdoch’s Met Gala was sufficiently camp.

MK & A’s floor-grazing Chanel leather getups give off extreme Morticia Addams vibes. Though the concept of twins wearing matching outfits strikes me as somewhat camp, these outfits are simply too stately and/or elegant to qualify. Camp stems from bad taste and Mary-Kate and Ashley could not access bad taste if they tried. It pains me to award the Olsen Twins a low score on anything, but these outfits are simply Not Camp.

What the actual f*ck. This woman clearly understands camp on a deeper level than I previously believed possible. On second evaluation, I should have expected this from the person responsible for “I Kissed a Girl” (extremely camp), but this look took me by complete surprise. Perry took the Surrealist concept of a readymade (the chandelier) and then cranked it up to eleven by wearing this Moschino dress and headpiece featuring over 7,000 Swarovski crystals. This look was so good — so camp! — it gave me a mild heart attack.