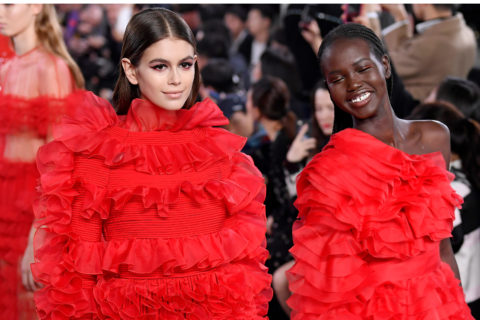 The Campiest Trend of Spring 2019? Ruffles

Encompassing anything "ostentatious, exaggerated, affected, [and] theatrical," ruffles might just be the definition of camp.

Pierpaolo Piccioli’s Pre-Fall 2019 collection for Valentino is a profound study in frills: Ruffled piping, flouncy tiers and other details that sound indistinguishable from cake decorating techniques camouflage nearly every inch of fabric. But closer inspection reveals a lacy topper embedded with a plastic zipper, a sweater that appears to have been made using origami but turns out to be a knit and a cape with stiff-looking accordion pleats that morph to the movements of the body. Beneath all the frippery is a steely toughness built to withstand the travails of life—like Dolly Parton if she were a dress. “I didn’t want to do streetwear or daywear generically,” Piccioli told WWD. “I wanted to get the identity of the house but going into the street.”

The diktat “ruffles for spring” might sound clichéd—think a runner-up to Miranda Priestly’s withering quip about flowery prints: “Florals for spring? Groundbreaking”—but ruffles have undergone a reputation rehab. Frilly flourishes that typically evoke softness and femininity have assumed a more pragmatic sensibility for the Spring 2019 season. At Marc Jacobs, necklines and sleeves rimmed with puffs of tulle are reminiscent of Pierrot the clown, while lacy veils and tiered ruffles at Rodarte reference both flamenco dancers and religious madonnas. Dior pairs athletic dancewear separates with voluminous skirts, and Pyer Moss’s asymmetrical ruffled hems assume an organic quality. Even Comme des Garçons re­imagines its familiar bulges as a form of frippery.

Ruffles seem regressive and old-fashioned compared to the stark streetwear (think hyper-specific sneaker trends and anything Supreme) that fashion has been infatuated with as of late. Yet frou-frou dresses and Pete Davidson’s neon scumbro sensibility may not be as incongruent as they initially seem. Piccioli’s insistence that his filigreed finery is a form of streetwear suggests that the genre may be ready to shed its signature shapeless hoodies and cargo pants in favour of a more delicate—but still hardy—aesthetic.

Fundamentally, ruffles are extraneous bits of fabric that serve no practical purpose. “They’re a sign of leisure,” says Jonathan Walford, co-founder and curatorial director of the Fashion History Museum in Cambridge, Ont. “Ruffles are not something you wear to make yourself more useful. They’re unnecessary frivolities that you add to your clothes.”

But ruffles do serve one utilitarian function: to draw attention to themselves. We live in a world where self-promoting social media stars ascend to the highest pillar of celebrity and where the ability to accumulate wealth is often based on the number of followers one has. Garnishing oneself with ruffles may be a canny strategy for survival in the attention economy. Given young people’s inability to earn an income commensurate with previous generations, it makes sense that millennials have chosen to monetize the one last thing they still feel ownership over: themselves.

In this context, ruffles could serve as windy semaphores, directing eyeballs toward the valuable currency of the personal brand. In our “rise and grind” work culture, where we’re never off the clock, ruffles have shed their patina of wealth to become a symbol of striving. They are a form of hustle in and of themselves. And in no subculture is the hustle more rewarded than streetwear.

“The worlds of luxury and street fashion are more synergized than ever before, and this merger shows no sign of breaking any time soon,” says Nico Amarca, a fashion editor who has previously worked for Hypebeast and Highsnobiety. “There are no rules when it comes to designing streetwear. We’ve seen everything from leather skirts, T-shirt dresses, parachute pants, boiler suits and cartoonish sneakers become fashion staples over the past few years. Who’s to say that ruffles won’t achieve the same style status?”

Ruffles may be a strategy for surviving the social media Hunger Games. But even as a bid for attention, they’re still undeniably pretty. If peacocking is a way to gird oneself against the bleakness of the future, then I say “So be it.” 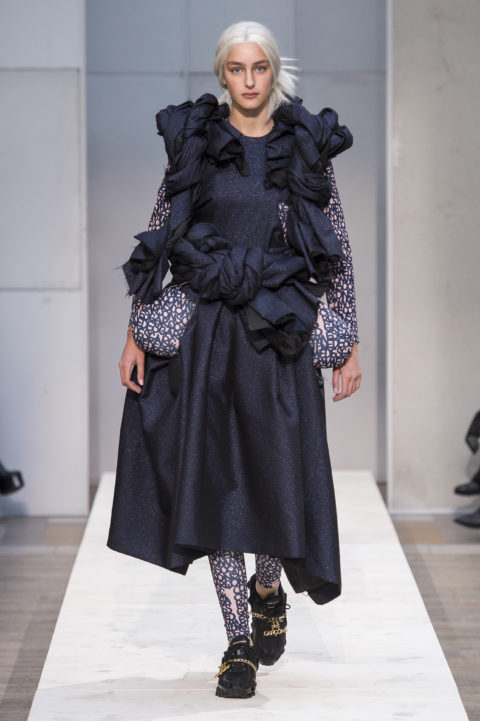 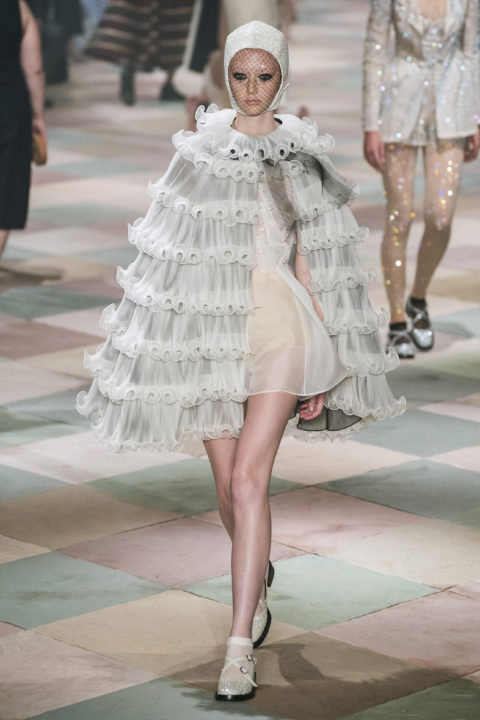 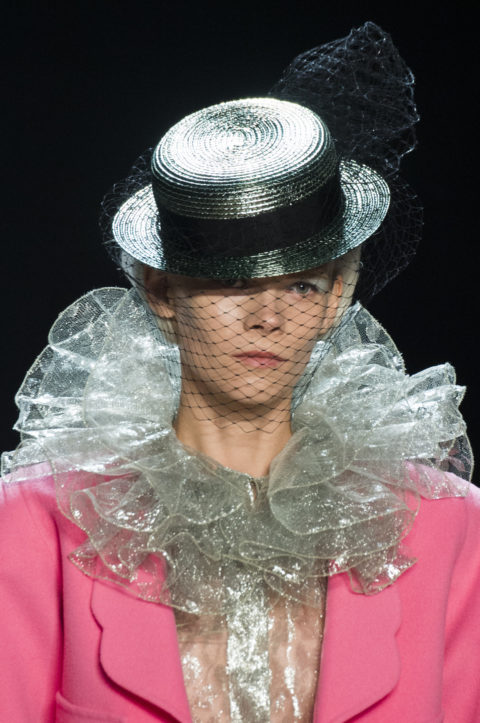 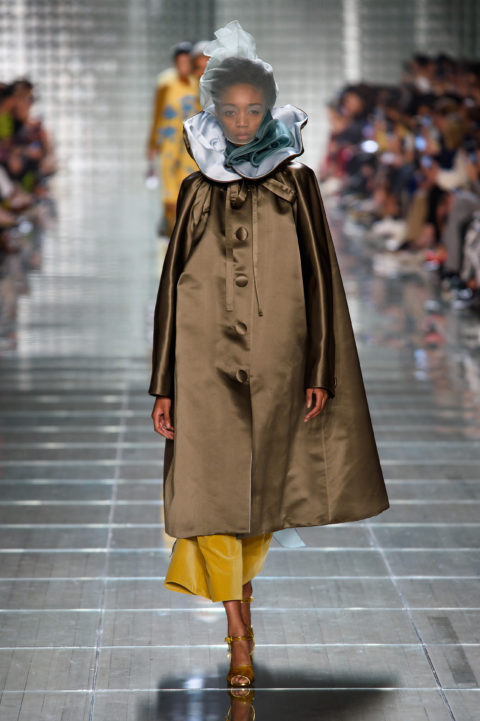 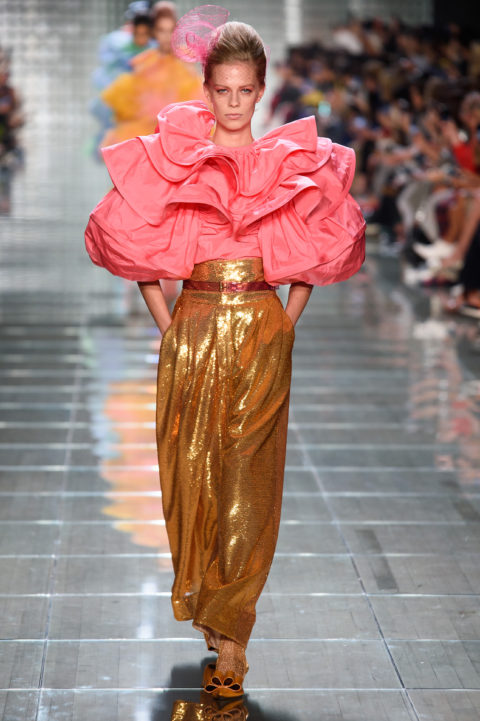 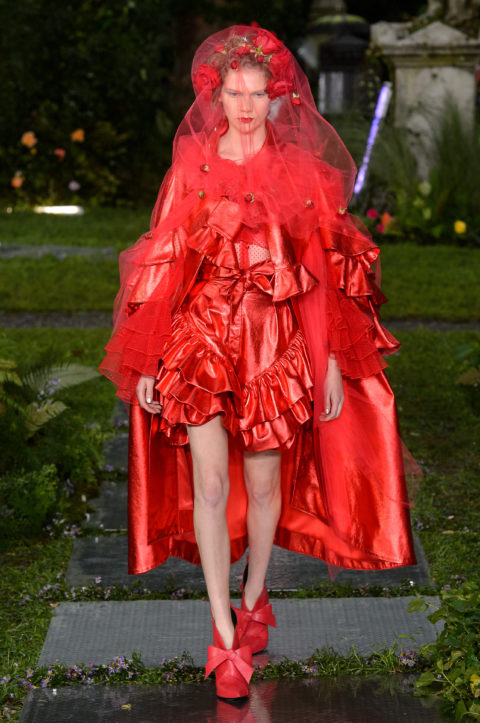 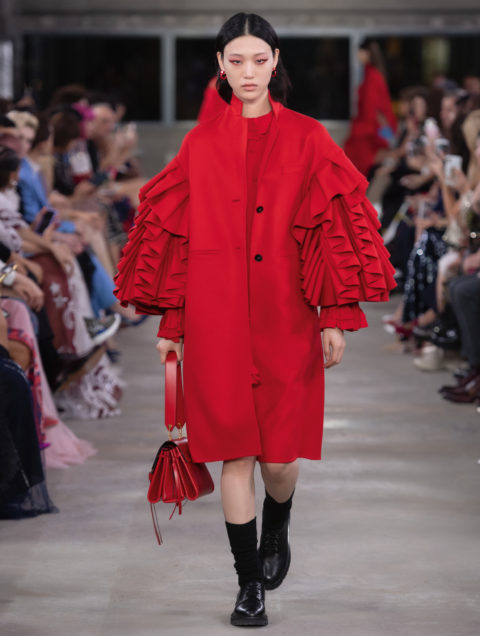 Photo by WWD/REX/Shutterstock
Get the best of FASHION in your inbox Thanks for signing up!
The latest fashion, beauty and celeb news delivered right to your email #FASHIONforall Now, check your inbox to complete your subscription
We won’t ever use your email address for anything else
Want even more FASHION? Follow us on social media.