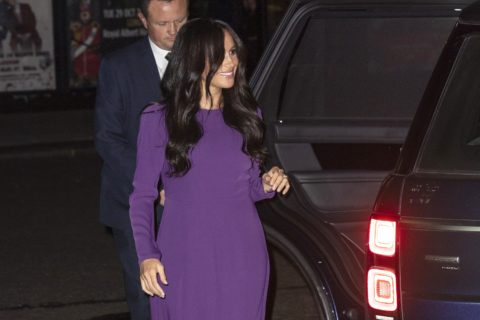 Meghan Markle Takes Her Purple Aritzia Dress for Another Spin

So nice she wore it twice.

The Duchess of Sussex made her first public appearance following the release of a new documentary that laid bare the struggles she’s faced since joining the royal family. However, Meghan showed no signs of sadness tonight as she attended the One Young World summit in London.

The summit is held yearly and brings together young people from over 190 countries worldwide. This is the third year Meghan has participated in the event, first attending in 2014 in Dublin as a counsellor to talk about equality, and again in 2016 in Ottawa.

Tonight, Meghan attends in her capacity as Vice President of The Queen’s Commonwealth Trust which brought 53 young people from Commonwealth countries globally to the four-day event.

Meghan arrived at Royal Albert Hall looking radiant in a recycled purple midi dress from Aritzia (it’s the Maxwell dress to be exact however the style has since sold out). She was first spotted wearing the piece back in January on her first engagement of the year in Birkenhead. At the time, she paired it with a red coat by Sentaler.

For tonight’s occasion however, Meghan opted to let the dress speak for itself, simply accessorizing with blue Manolo Blahnik suede pumps for the outing.

To celebrate the event, the Sussex Royal Instagram account shared a sweet video of Meghan making her way on stage. She joined an impressive line-up of counsellors who will mentor the youths across the next four days including Sir Bob Geldof, Ellie Goulding, Doutzen Kroes, Nobel Peace Prize winner Professor Muhammad Yunus and activist and author Sinèad Burke whom the Duchess chose to appear on her British Vogue cover back in September.

Surrounded by today’s generation of impactful young leaders, The Duchess of Sussex attended the 10th Annual One Young World Summit Opening Ceremony at the @RoyalAlbertHall in London along with 2,000 young leaders from 190+ countries. This is her third time in attendance as a counselor for these extraordinary young leaders from around the world, and her first time attending as a member of The Royal Family and Vice President of The @Queens_Commonwealth_Trust. For more information, visit @OneYoungWorld or our previous post to see her support of this organisation in recent years. #OWY2019 Video © SussexRoyal

Sussex Royal confirmed that Meghan will appear again at the summit to host “a round table discussion with several of the One Young World young leaders to address the issues of gender equality worldwide, and how we can all play our part to reach equality for all.” Watch this space.