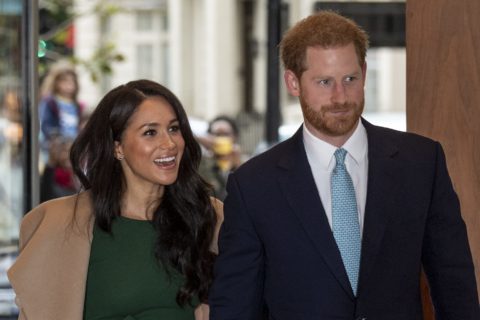 When you have an item in your wardrobe that you love, you’ll find every reason to bring it out time and time agin – and that’s the case with Meghan Markle and her beloved Sentaler coats.

Today, Meghan and Harry stepped out to attend the annual WellChild Awards in London, which are held to honour sick children and their caregivers. The charity is one that is particularly close to the royal pair’s hearts – it was the recipient of some of the donations made to the couple following the birth of Archie. Harry is also the patron for the charity, having held the role since 2007.

Ahead of the official ceremony, the pair met with the winners of each category and their families, before Harry delivers a speech and presents the award for the Most Inspirational Child (aged 4 to 6) at the event.

Meghan looked radiant in a green midi dress and camel coat, both items we recognized from prior outings. Fast becoming the queen of the re-wear, Meghan opted for the green P.A.R.O.S.H. dress she wore to announce her engagement to Harry back in 2017 and her camel coat from Canadian outerwear label Sentaler. Meghan was first spotted in the coat back in 2017 also when she attended her first church service with the royal family on Christmas Day.

Speaking with FASHION following the brand’s announcement that it was expanding into menswear, Bojana Sentaler explained what it was like when Meghan first wore the coat in 2017. “Meghan has been wearing Sentaler for many years when she was living in Toronto so I knew she owned Sentaler but it did come as a surprise [on Christmas Day] because she was actually shopping in her closet. She chose to wear a coat she previously owned during the time she lived in Toronto.” And it would appear that this is a coat Meghan will continue to reach for in the years to come.