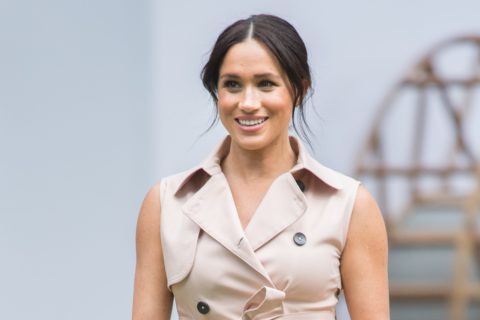 It’s no secret that Meghan Markle has had a tough time since joining the British royal family. The Duchess has been the target of unrelenting media scrutiny since her relationship with Prince Harry was announced, and particularly following their wedding last year. And now, Meghan has spoken publicly for the first time about the toll that has taken on her over the past year.

As part of ITV’s documentary on the recent royal tour of South Africa, Meghan was interviewed by anchor Tom Bradby who began by asking about how recent events had affected her mental and physical health. A visibly emotional Meghan replied, “Look, any woman, especially when they are pregnant, you’re really vulnerable and so that was made really challenging, and then when you have a new born…especially as a woman, it’s a lot. So you add this on top of just trying to be a new mom or trying to be a newlywed, it’s, well…”.

The Duchess continued, “And thank you for asking because not many people have asked if I’m OK. It’s a very real thing to be going through behind the scenes.” Bradby then asks if its fair to say that Meghan is in fact not really OK and that it’s been a struggle to which Meghan replies simply, “Yes.”

The documentary, Harry & Meghan: An African Journey will air on Sunday October on ITV. It also includes an interview with Harry who was asked about his relationship with the press and the correlation to his mother’s passing. “I think being part of this family, in this role, in this job, every single time I hear a click, every single time I see a flash it takes me straight back, so in that respect it’s the worst reminder of her life as opposed to the best,” he said.

The interview comes following Harry’s scathing rebuke on the press during the final days of the South African tour. It was revealed that the Duke and Duchess of Sussex are suing the Mail on Sunday for publishing Meghan’s private letters to her father. In a statement, Harry said, “Though this action may not be the safe one, it is the right one. Because my deepest fear is history repeating itself. I’ve seen what happens when someone I love is commoditized to the point that they are no longer treated or seen as a real person. I lost my mother and now I watch my wife falling victim to the same powerful forces.”

Photo by Samir Hussein/WireImage
Get the best of FASHION in your inbox Thanks for signing up!
The latest fashion, beauty and celeb news delivered right to your email #FASHIONforall Now, check your inbox to complete your subscription
We won’t ever use your email address for anything else
Want even more FASHION? Follow us on social media.