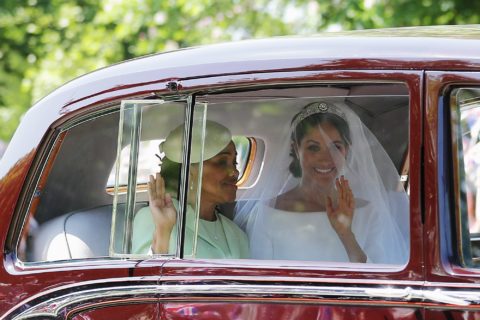 Meghan Markle opted for stunning simplicity with the Clare Waight Keller-designed dress she decided to walk down the aisle in for her royal wedding to Prince Harry. Though she is British, Waight Keller is the artistic director of the French house of Givenchy, and is notable as the first-ever female artistic director in Givenchy’s history.

Anticipation over the bride’s dress had been steadily building for weeks and reached fever pitch yesterday when Page Six reported that Meghan Markle, now the Duchess of Sussex, had chosen Stella McCartney to dress her on her big day. Waight Keller had not been on any of the bookie’s favourite lists up until now, yet the dress the world has been waiting for certainly did not disappoint.

Rather than going the frilly, tiered wedding cake route, Markle’s dress was a classic, long-sleeved affair featuring a wide boat neck that just barely exposed the bride’s shoulders, a relatively short train and — gasp — no lace to behold. The veil of the dress is particularly significant – Waight Keller designed it to feature the distinctive flora of all 53 Commonwealth countries, because as Kensington Palace says, the bride had wanted to include all of the Commonwealth with her on her wedding day.

Photography by Richard Heathcote/Getty
Get the best of FASHION in your inbox Thanks for signing up!
The latest fashion, beauty and celeb news delivered right to your email #FASHIONforall Now, check your inbox to complete your subscription
We won’t ever use your email address for anything else
Want even more FASHION? Follow us on social media.