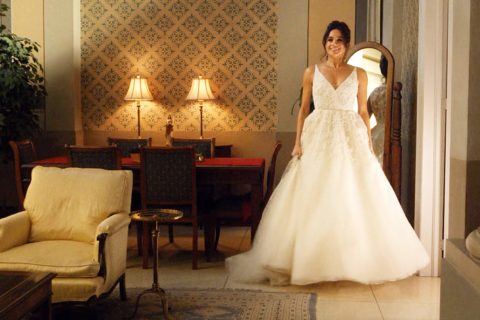 Is Stella McCartney the Designer Behind Meghan Markle’s Wedding Dress?

The question on everyone’s minds ever since Meghan Markle and Prince Harry announced their engagement has been: Who Will Design The Wedding Dress? A half-dozen names have been tossed around over the past several months, and today, just a day before the wedding, a frontrunner has emerged: British designer Stella McCartney. According to Page Six, who spoke with British bridal designer Caroline Castigliano, McCartney is likely the designer behind The Dress. “Stella is such a perfect fit for Meghan, she uses organic fabrics and her ethos is the same as Meghan,” Castigliano told the outlet. “Her style is very underplayed, her dresses are very clean in style, very much Meghan — and they are friends.”

We’ll have our answer soon enough, but in the meantime, scroll down for all the names in the running.

We know, through quotes from interviews past, what this princess-to-be’s thoughts on dream wedding attire are. In a 2016 interview with Glamour about her Suits character Rachel Zane’s upcoming wedding, she said, “For TV we did have to bring the neckline up a touch per the producers’ request, but the original design has a low ballerina-inspired neckline and I happen to love that.”

We know from her countless public appearances that her style skews more low-key than high glam. A taste for classic silhouettes, solid colours, and minimalist accessories lead us to conclude that her wedding dress, too, will be a pared-down, classic affair. This little nugget from the same interview seems to support our hypothesis—when asked about her favourite celebrity wedding dress, Markle’s answer was, “Carolyn Bessette Kennedy. Everything goals.” As you may know, Bessette Kennedy was no ordinary bride. Her wedding dress stayed true to her sleek, no-fuss style, but was everything you wouldn’t expect from a bride on her big day. Not a single piece of lace, nor a stitch of embroidery, no dramatic train, and no elaborate veil… just a simple, body-skimming slip dress by Narciso Rodriguez.

Now, we don’t think Markle’s going to go quite that minimalist—it is a royal wedding after all, and will be watched by millions—but we’re not expecting any OTT drama either. Taking all that into account, as well as her own personal relationship with various designers, we drew up a short list of the (mostly British) names we think could be behind the wedding dress of the year.

Prospect 1: Erdem
Although Erdem Moralioglu is a far-cry from a minimalist designer (florals are his jam), he is a master of silhouette, romance, and understated elegance. Markle has worn his pieces in the past, and as a Canadian designer who now lives and works in London, he would be a fitting choice—a nod not only to the world she’s leaving behind (she lived in Toronto for the good part of six years while filming Suits), but also to the one she’s now entering.

Plus, his fall/winter 2018 collection is inspired by actress/dancer Adele Astaire—yes, sister to Fred—who gave up her performing career to marry Lord Charles Cavendish. Sound familiar?

Prospect 2: Emilia Wickstead
A modern-day Carolyn Bessette-Kennedy would 100% want to get married in Emilia Wickstead’s sleek, minimal, no-fuss gowns, which is what makes this London-based designer a strong contender for the big day. Wickstead is also certifiably Kate Middleton-approved, and even launched her own bridal line last year. So that’s definitely more reasons than one…

A post shared by Emilia Wickstead Bridal (@emiliawicksteadbridal) on Feb 21, 2018 at 9:11am PST

Prospect 3: Stella McCartney
Stella McCartney is about as close to non-royal royalty as it gets—her dad is Paul McCartney after all. She’s British, she’s been worn by Markle before (a black coat with a ribbon belt was one of the princess-to-be’s sharpest looks in recent months), and she’s known for her modern, feminist take on classic Britannia. When asked by an E! reporter back in January about the rumours doing the rounds of McCartney being in the running, the designer said, “I’ll take that as a compliment. I’ve done a few wedding dresses for very close friends and it’s an incredible honour. I think it’s one of the most special days in anyone’s life. And it’s such a personal affair, so I’m a big fan of doing wedding dresses in general.” Noted.

Prospect 4: Roland Mouret
We could speculate about what makes Mouret a great candidate, but the most pertinent clue here would be something the French designer himself let slip in a recent interview with the New York Post. The longtime friend of Markle’s said, “Meghan knows really well what she likes and the main thing with Meghan is to listen to her and work in collaboration with her. I’ve already said too much.” Yes you have, sir, yes you have.

Prospect 5: Ralph & Russo
We only have one clue here but it’s major—she wore a gown from the couture house for her engagement photos. The London-based design duo behind the label is known for elaborate statement gowns (aka red carpet catnip), but considering that whatever Markle ends up wearing to her wedding is going to be custom-made anyway, there’s no doubt they’d tweak their signature aesthetic to suit her style specifications.

Prospect 6: Victoria Beckham
The erstwhile Posh Spice’s label is known for being a few things: understated, impeccably constructed, and with a refreshingly modern take on ‘ladylike.’ Sounds right up Markle’s alley, right? But this rumour might be over before it even really begins, because Beckham kind of shut it down when the Guardian asked her about the ivory sweater from her label that Markle wore in her other engagement photo. “She looked absolutely beautiful in my jumper. I’m sure it will be a really fun wedding,” she said. “But no, she hasn’t asked me to do the dress.” Hmm. If you say so.

Prospect 7: Alexander McQueen
We didn’t think this was a serious possibility, only because Kate Middleton’s already been there, done that. But apparently Betfair, the go-to website for any and all royal-related betting, recently received a “frenzy of bets” in favour of the British fashion house, helmed by Sarah Burton, leading them to suspend all betting on the dress.
“We previously had Ralph and Russo as the 2/1 [favourites] and there’s also been a lot of talk of Erdem as a big front-runner,” a Betfair rep said in a statement, according to Harper’s Bazaar. “However, we’ve now suspended this market after seeing some interesting betting on Alexander McQueen this morning who went from 16/1 to 8/1 in a very short space of time.” Curiouser and curiouser.

Photo Courtesy Suits
Get the best of FASHION in your inbox Thanks for signing up!
The latest fashion, beauty and celeb news delivered right to your email #FASHIONforall Now, check your inbox to complete your subscription
We won’t ever use your email address for anything else
Want even more FASHION? Follow us on social media.