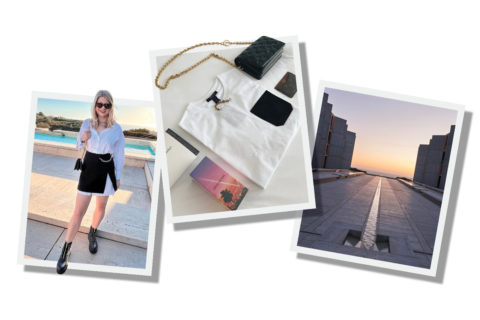 The writer at the Salk Institute for Biological Studies and the Louis Vuitton goodies in her hotel room. Graphic by Leo Tapel
Style

Annika Lautens discovered that clothing was the perfect emotional armour for attending the LV 2023 Cruise show, where battle-ready garments blended past and future.

It took me three weeks to plan my outfit for the Louis Vuitton 2023 Cruise show, and all I wore was a white shirtdress. But it was an elevated white shirtdress with voluminous sleeves, a black overskirt and a silver chain belt. I felt cool enough to stand up to the judgment of the world’s most critical jury — my international peers — yet not like I was trying too hard. That’s the unwritten rule of attending these fashion events; you can’t look like you care. Is this ridiculous? Completely. But was my outfit also a type of armour that gave me the confidence to walk tall as I brushed shoulders with Anna Wintour? Absolutely.

This idea of using clothing as a cover is at the heart of the Louis Vuitton 2023 Cruise collection. As guests joined the French luxury brand in San Diego at the Salk Institute for Biological Studies (a non-profit organization dedicated to biomedical research) that’s considered one of the world’s architectural wonders, the show started at precisely 6:45 p.m. — just before sunset. What followed was a profound study of darkness and light.

In a press release, creative director Nicolas Ghesquière noted that “the sun was the guest of honour,” and true to his word, the San Diego sky cast a mystical glow on the already shimmery gowns and sporty separates. But as the luxurious tweeds, jacquards and silks glistened in the golden hour, the rest of the collection began to tell a different story — about a dystopian future in which our attire acts as armour, protecting us from the climate crisis, another pandemic or maybe even ourselves.

Of course, the concept of using clothing for self-defence is nothing new. In its most basic form, fashion is functional; it’s an outer layer that safeguards our bodies from weather, climate and nature. However, it has long been believed that what we wear also provides a type of psychological protection, enabling us to hide or project whichever parts of our identity we so choose. (Think about how you feel wearing a suit versus sweatpants.)

It’s this duality that deepened Ghesquière’s collection. Some references were obvious: Intricate draping evoked images of ancient Roman (or Dune) warriors, and medieval knights got modernized with silver chained tops and shiny pants. Other outfits alluded to more of an emotional shield, with their oversized hoods and cocoon-like shapes resembling a baby’s swaddling clothes. Finally, some even had straight-up UFOs as shoulder pads, which tied into the overall sci-fi feel of the event. But one thing was clear: The Louis Vuitton woman is no damsel in distress. And in my white shirtdress, neither was I.

Below, we break down some of the Louis Vuitton 2023 Cruise collection’s most battle-ready looks. 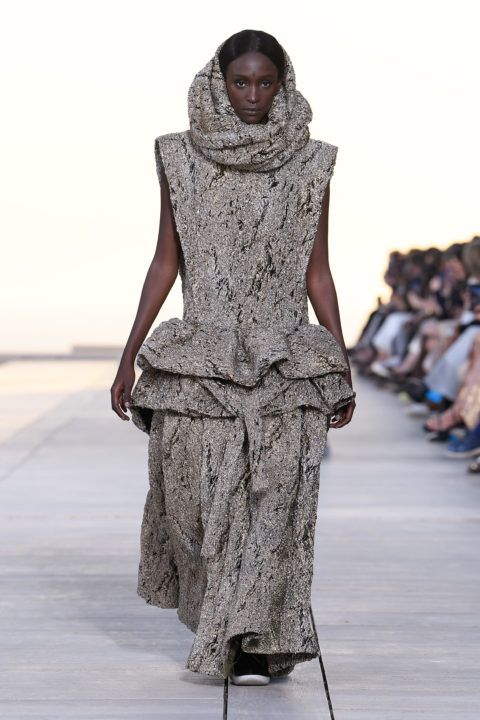 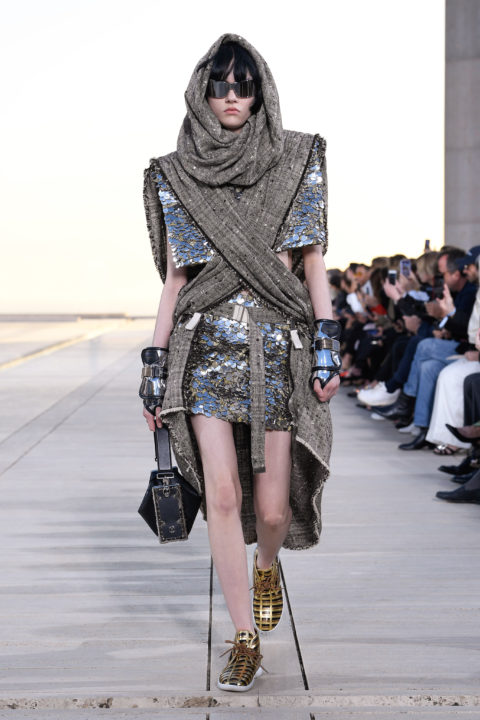 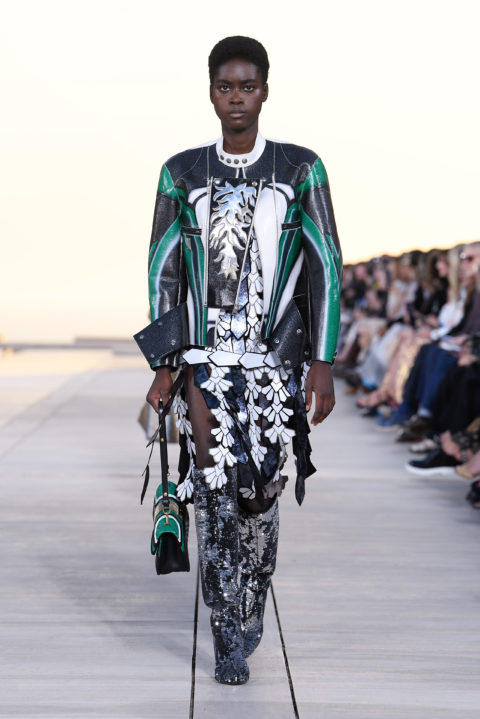 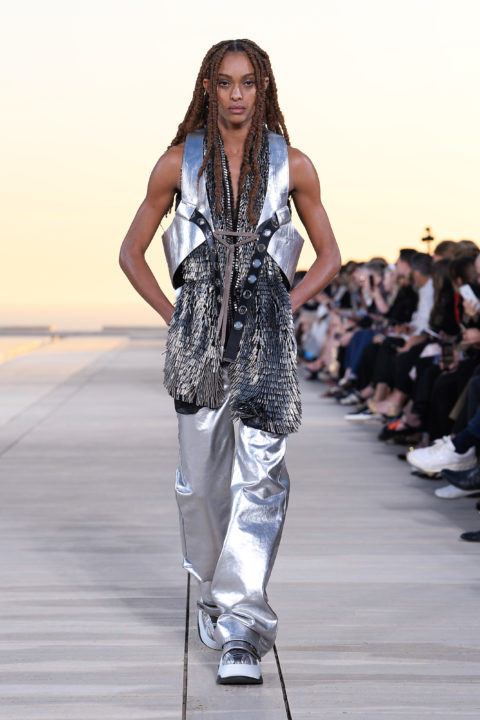 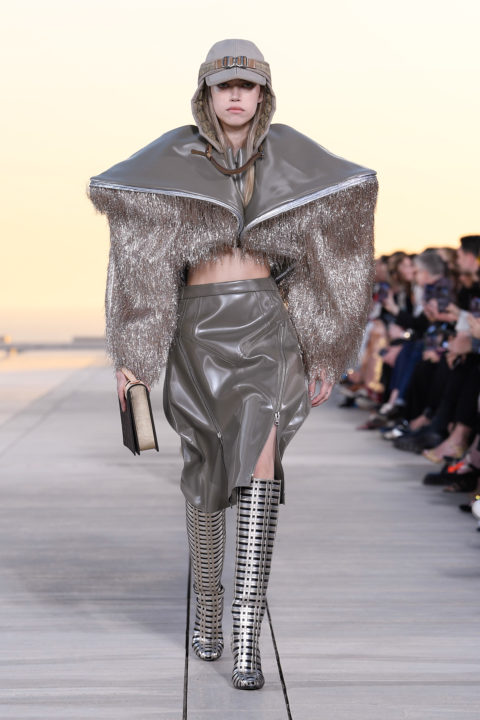 Inspired by “the spirit of an oracle,” Nicolas Ghesquière designed this opening outfit to resemble religious imagery. But his use of lava-like blistered jacquard fabric and metallic threads created a result that can only be described as otherworldly.

Ghesquière constructed this layered look made of linen and blistered silk as an ode to the desert and its inhabitants. The intergalactic texture of the dress underneath was derived from a form of tactile needlework called pastille embroidery.

The glittered leather in both the gladiator-style dress and the moto-inspired jacket in this look emphasizes the artisanal craftsmanship of the design house while blending the past with the present and potentially the future.

To emulate the look of armour, the Louis Vuitton team used lambskin with a metallized coating to create the vest and pants. For the top, the artisans at the atelier applied shiny embroidery to mimic the texture of chain mail (minus the weight).

The kitelike shape of the final look was designed to resemble wings preparing to take flight. Made from glossy vinyl and heavy cotton canvas, the outfit has a shine factor that truly makes it seem out of this world.

The writer at the Salk Institute for Biological Studies and the Louis Vuitton goodies in her hotel room. Graphic by Leo Tapel
Get the best of FASHION in your inbox Thanks for signing up!
The latest fashion, beauty and celeb news delivered right to your email #FASHIONforall Now, check your inbox to complete your subscription
We won’t ever use your email address for anything else
Want even more FASHION? Follow us on social media.