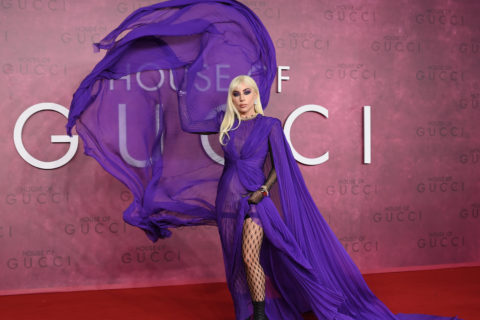 Give Lady Gaga Her House of Gucci Oscar Already

All eyes were on Lady Gaga this week at the House of Gucci promo tour in London.

Wearing a dress straight off the Gucci Love Parade runway, she embodied the collection’s theme of Hollywood glamour and cinematic madness as she moved through the red carpet, flicking her cascading frock around.

Ridley Scott’s House of Gucci is based around the 1995 murder of Maurizio Gucci (Adam Driver), Guccio Gucci’s grandson and the heir to the fashion house. His ex-wife, Patrizia Reggiano (Lady Gaga), was famously, allegedly, behind the plot to kill him.

For the film’s premiere, Gaga opted for a purple pleated gown with a thigh-high slit and a long cape that trailed behind her on the carpet. Styled by Sandra Amador and Tom Eerebou, the look was completed with fishnet stockings, a bedazzled mesh undershirt and some diamond jewelry courtesy of Tiffany & Co. Of course, the “Born This Way” singer sported her signature electric blonde hair and dangerously high platform heels.

Lady Gaga makes her entrance in @Gucci for the premier of House Of Gucci. #ladygaga #houseofgucci #gucci #redcarpet

The star-studded cast was fitted with many other Gucci ensembles, because what else? Jared Leto — who notably walked in the Gucci Love Parade on November 2 — wore a plunging teal velvet suit with heeled boots, accessorized with a human heart-shaped clutch. On-screen, Leto will be nearly unrecognizable, wearing prosthetics for his role as Paolo Gucci, the former vice-president and managing director of Gucci Shops Inc. and Gucci Parfums of America. Salma Hayek, who plays Patrizia’s friend Giuseppina Auriemma, sported an all-gold pleated gown with puffed sleeves and a V-shaped neckline.

While Gaga’s on-screen husband Adam Driver opted for a simple Burberry suit, his toned-down look complimented her extravagance. Mr. and Mrs. Gucci posing together made for some very adorable couple photos — reminiscent of Gaga’s red carpet chemistry with Bradley Cooper in A Star Is Born.

Ahead of the film’s official release on November 24, Oscar buzz is already swirling for Gaga as Patrizia. The campy fashion and enticing plot points in House of Gucci were seemingly meant for Lady Gaga, who is known for her over-the-top glamour. And she was committed to doing the role justice. In a recent interview with Vogue, the artist shared that she took up the (sometimes shady) process of method acting when preparing for her role as the alleged murderess. From the trailer alone, we already have iconic quotable lines delivered by Gaga, like, “I don’t consider myself to be a particularly ethical person, but I am fair,” now a viral meme on TikTok.

Gaga proved her acting chops when she blew critics away as Ally Maine in Cooper’s 2018 reimagining of A Star Is Born. Despite doubts in the industry that she wasn’t the right fit for the role, the singer ultimately secured an Oscar for Best Original Song with the film’s hit anthem “Shallow.” Her star power is undeniable: The artist can both sing and act, while consistently generating red carpet buzz in her show-stopping looks (who can forget the iconic fashion on display during the promo for A Star Is Born?).

From her House of Gucci red carpet appearance alone, we can garner that Gaga’s performance in the film will be filled with her signature charisma and captivating screen presence.

Photography by Karwai Tang/WireImage via Getty Images
Get the best of FASHION in your inbox Thanks for signing up!
The latest fashion, beauty and celeb news delivered right to your email #FASHIONforall Now, check your inbox to complete your subscription
We won’t ever use your email address for anything else
Want even more FASHION? Follow us on social media.