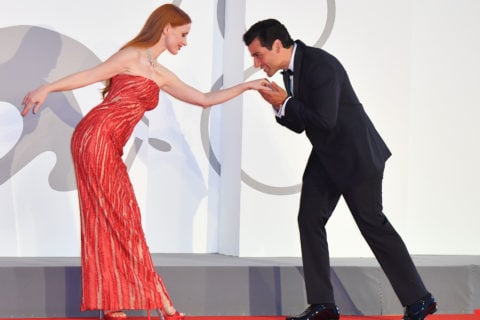 I, Too, Would Like Oscar Isaac to Sniff and Smooch My Arm

Over the weekend, I was reminded yet again of why I could never be an actor: I would simply fall in love with all of my co-stars. This is especially true if my colleague was Oscar Isaac, the internet heartthrob who seems to have chemistry with every person on Earth. When gracing the Venice Film Festival red carpet on September 4, Isaac and co-star Jessica Chastain sent the internet into an absolute froth with some very sensual sniffing action that will be forever etched into pop culture’s collective memory.

The flirty incident, which was of course captured on video, starts innocently enough: Chastain has her arm around Isaac’s shoulders as any co-star hamming it up on the red carpet would. And then there’s a moment — a pivotal moment — when he turns to her, stares down at her bicep and begins to stroke it as if he’s realizing for the first time that she has an arm. When they make eye contact, his eyes are filled with pure adoration, and then, he sticks his face into her arm, seemingly inhaling her scent while planting a kiss very close to her underarm. Chastain, looking understandably flustered, playfully pushes him away and returns to hold his face. Isaac, then, does a chef’s kiss hand gesture and looks up to the sky, as if to say, “Thank you, God.” If I was a part of that moment, I would be thanking a higher power as well.

I wish I had words for this but I really do not pic.twitter.com/xJVzOJJCeh

Chastain, wearing a strapless red Atelier Versace gown and a statement Chopard diamond necklace, walked alongside her co-star Isaac, in a black tux, for the Venice Film Festival premiere of Scenes From a Marriage, an HBO television series debuting on September 12. The series, which is based on the 1973 miniseries written by Ingmar Bergman, gives an intimate look into the collapsing relationship of Mira (played by Chastain) and Jonathan (played by Isaac).

We’ve seen displays of this palpable Chastain-Isaac chemistry before, with fans referencing a scene where Chastain similarly held Isaac’s face when they played a couple in the 2014 film A Most Violent Year. The two have a long-standing friendship, dating back to their days as students at The Juilliard School in Manhattan. They are both also married — Isaac to screenwriter Elvira Lind (who was standing next to them during their red carpet show of affection) and Chastain to fashion exec Gian Luca Passi de Preposulo. But still, the moment fuelled countless jokes about how their respective spouses must have felt seeing that go down.

oscar isaac’s wife and jessica chastain‘s husband when they get home: pic.twitter.com/StEQnEf9wQ

The arm sniff was reminiscent of a scene in The Addams Family wherein patriarch Gomez Addams lustfully smells his wife Morticia’s arm. Isaac previously voiced Gomez in an animated The Addams Family project, so these comparisons are truly spot on. Chastain gave a nod to the observation, tweeting a snap of the Gomez arm sniff scene, captioning it with “Sept 12th” — the release date of Scenes From a Marriage.

This is not the first time that perfectly paired co-stars used their undeniable chemistry to promote upcoming projects. Who can forget the love fest that came from Bradley Cooper and Lady Gaga when promoting A Star Is Born? Their affectionate artistic relationship came with countless flirtatious red carpet moments, mutual gushes of adoration over one another in interviews, and most notably, their viral performance at the 2019 Oscars — complete with hand-holding and longing stares into each other’s eyes.

Was this steamy Isaac-Chastain moment likely staged to generate press for their upcoming show? Of course. Did it work? Here I am writing about it. Even still, I believe that that level of chemistry simply can’t be faked. And I’m here for the genius promotional tactic that has the internet hot and bothered.